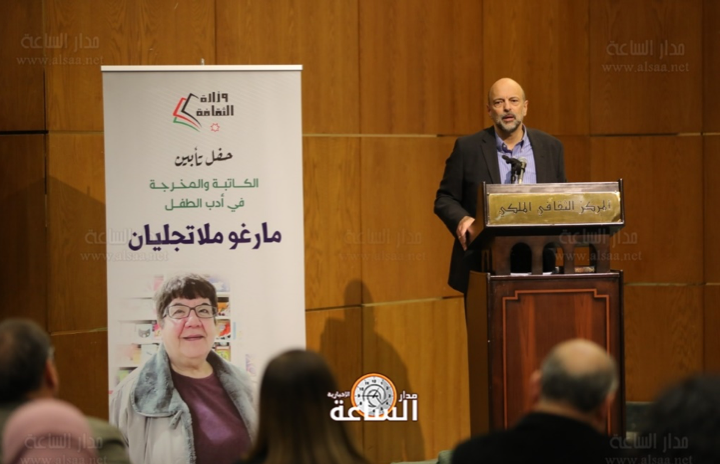 In Amman, Hashemite Kingdom of Jordan

Amman: On March 7, 2020, a memorial dedicated to the late author and theater director Margaret [Margo] Malatjalian was organized by the Ministry of Culture of the Hashemite Kingdom of Jordan at the Royal Cultural Center in Amman. In a surprise appearance, Jordan’s Prime Minister Dr. Omar Al-Razzaz joined in the memorial to celebrate the late author/director’s life and work in the development of Jordanian children’s culture and literature.

Although Al-Razaz was not scheduled to speak at the ceremony, he took the stage and gave an impromptu speech in which he recalled the important stages of the late author’s life, her special place in developing Jordanian culture and her important role in establishing children’s literature in the Hashemite Kingdom of Jordan. Mr. Al-Razzaz even related his childhood memories as a member of Margo’s Children’s Theater group and acting in one of the plays that Margo wrote, produced and directed. Later as a father, he added, he enjoyed reading Margo’s books to his children and admired the originality of her themes.

Al-Razzaz also praised the late author as a national as well as a global personality who promoted cultural and humanitarian projects from which many Jordanian and Arab families benefited.

Al-Razzaz referred to one of the late author/director’s missions in developing Jordanian children’s culture by establishing the Friends of Children Club in the 1970s. The Club was a first of its kind as it had a children’s library in addition to after-school and summer activities in theater, music, arts and crafts. Al-Razzaz, once a member of the Club, reminisced about Margo’s great impact on developing the children’s personalities by providing many of them a platform where they could express themselves and communicate their thoughts and feelings through drama and theater.

Al-Razzaz also talked about the impact the late author/director had in developing children’s literature in Jordan. Her books, he said, are much loved by children because Margo’s stories enable children to understand the other, to understand their relationships with others as well as their surroundings, and to ask questions; Margo’s books talked to the child from a child’s point of view instead of an adult’s point of view. Margo’s 30 plus early-childhood books which have affected many children for the past 3 decades include diverse and appealing topics that enhance the culture of hard work through realistic characters.

The Minister of Culture Dr. Bassem Al-Toueysi stated that as the Ministry recalls the prestigious literary and cultural achievements of the late author-director Margo Malatjalian, it will remain committed to fulfilling the mission of the Ministry to support the contributions of Jordanians in enriching the Jordanian national and humanitarian culture. Therefore, the Ministry has decided to honor Margo’s achievements by reprinting a collection of the late author’s works as part of the current year’s Family Library Project.

Dr. Al-Touesi also emphasized that Margo Malatjalian was a pioneer in children’s literature and culture. In fact, her valuable contributions to children’s cultural and social development can be seen through her work that spanned over 5 decades starting with the Jordan Theater Group which she co-founded in the 1960s. Dr. Al-Touesi added that Margo remained faithful to her noble mission until the last days of her life.

Dr. Al-Touesi also said: “The late writer played an important role in developing literacy and the love of classical Arabic as well as in promoting children’s culture. She toured the Arab world spreading these great values by employing various literary forms, such as story, poetry, theater and puppet theater, all of which she used to make the process of teaching and learning of the Arabic language more enjoyable and effectual in developing the love of reading.”

On her part, Al-Shareefa Hind Bin Nasser of the royal family and a long-time friend of Margo Malatjalian talked about the mission that the late author accomplished through her dealings with children, her unconditional love for them and her vision to make a real change in the quality of children’s lives. By encouraging children to express themselves, cooperate with one another, develop self-confidence and develop the culture of teamwork, Margo had a great impact on the lives of children.

Senator Haifa An-Najjar, another long-time friend and colleague of Margo Malatjalian, highlighted the late author/director’s commitment to her work with children and her belief in modern methods of education that focus on self-learning that bring pleasure to children in their learning process.

Ms Samar Dudin, a director and the president of the Ruwwad Development Foundation, recalled the impact the late author/director had as an inspiring role model that embodied creativity.

Representing the Jordanian Writer’s Association, Mohammad Al-Mashayekh talked about the late author’s contributions in children’s literature and culture which included over 50 children’s plays and 30 picture books.

On her part, the Director of the National Center for Culture and Arts Lina Al-Tal asserted that Margo Malatjalian collaborated enthusiastically with the activities of the Center, including the Arab Children’s Conference. She said that Margo had not only paved the way for many actresses to take roles in the performing arts in general, but also integrated this art in education and development.

During the ceremony, a short documentary film on the important stages of the author/director’s life, career and contributions was shown. The film was produced by the Ministry of Culture, written by Arwa Al-Zoubi, narrated by artist Nasr Annani and directed by Ramadan Al-Fayoumi and Isshaq Yassin.