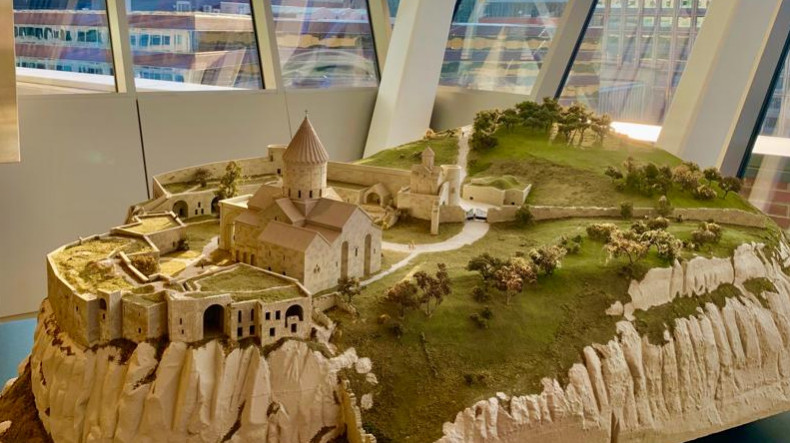 The miniature of the Tatev Monastery Complex and the replica of a 15-16th century cross-stone kept in the museum area of the monastery complex were exhibited for the first time at the Museum of the Bible in Washington D.C. on March 7.

The exhibits were donated to the museum by Initiatives for Development of Armenia (IDeA) Foundation and Aurora Humanitarian Initiative ahead of the 10th anniversary of construction of Wings of Tatev aerial tramway and launch of Tatev Revival Project, IDeA Foundation reported.

Within Tatev Revival Project, Tatev Monastery Complex, one of the religious, cultural and enlightenment centres of Armenia in the 9th century is being reconstructed. Cultural heritage is one of the key directions of IDeA Foundation, which is evidenced by Foundation’s over 150 projects aimed at preservation and restoration of cultural heritage in Armenia and the Armenian World.

The donated works will become part of the permanent exhibition representing Tatev Monastery Complex at the Museum of the Bible in Washington D.C. They will also be showcased at a major exhibition “Breath of God”: Armenia and the Bible, which will be held from September 2021 through March 2022. The exhibition will be dedicated to Armenia as the first country to have adopted Christianity as an official religion.

“Tatev Monastery will have a central role in the “Breath of God”: Armenia and the Bible exhibition. We hope that guests are inspired to visit the historic and beautiful site of Tatev and the surrounding area. This exhibition will be the first fully Bible-focused major exhibition on Armenia, which will have a special emphasis on Armenian-Americans and the American Diaspora in relation to the Bible. It will also be the most technologically advanced major exhibition on Armenia to date, and it will include many artifacts never before shown outside of their country of holding,” says Dr. Jeffrey Kloha, Chief Curatorial Officer at Museum of the Bible.

The exhibition will also focus on one of the biblical topics – “Following the Flood: The Second Chance of the Humanity” and the story of Noah’s Arch on the biblical Mount Ararat. The latter is also the key idea underlying #AraratChallengе global movement of Aurora Humanitarian Initiative as a global symbol of salvation and revival. Like Armenian orphan children who survived the Armenian Genocide got the chance to start a new life, #AraratChallenge initiative calls on joining efforts to give a second chance to those who most need it now. The exhibition to be held in Washington will present to Armenians, the world and whole humanity the symbol of the second chance.