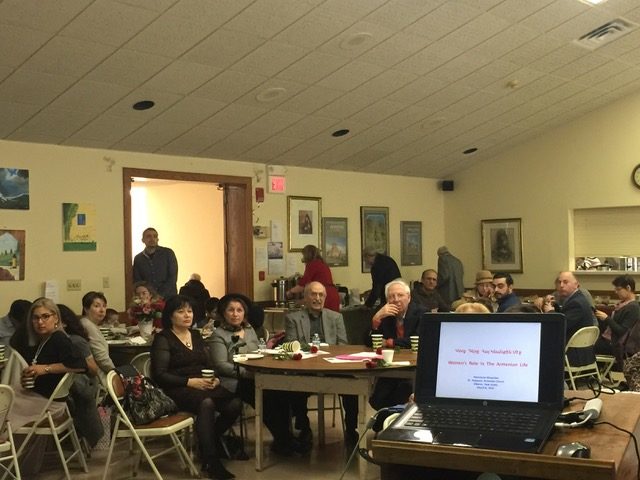 ELBERON, NJ—The parish council of the Central New Jersey St. Stepanos Armenian Apostolic Church held an International Women’s Day Celebration on Sunday. After mass, parishioners gathered in the church hall where a Lenten luncheon was prepared by the Ladies Guild.

Misserlian explained that while Women’s Day was created on February 28, 1909, it is now traditionally celebrated on March 8. He also explained the origins of the Armenian women’s movement in Constantinople where a mixture of European and Asiatic cultures coexisted. He focused mainly on the struggle of the first three women writers—Serpouhi Dussap, Zabel Assadour and Zabel Yessayan—to be recognized as authors in a land dominated by male writers.

The talk moved on to other domains: the first Armenian woman astronomer Marie Paris Pishmis (nee Soukiassian married to a Mexican astronomer), the first woman ambassador Diana Apcar from the New Julfa region of Iran (Armenian ambassador to Japan) and to college professors in the US.