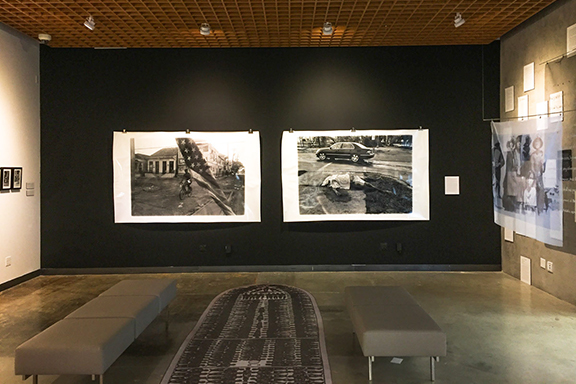 GLENDALE—Conceptual photographers and photojournalists tackle the thorny subject of the Armeno-Turkish divide with a critical look at the aftermath of war and dislocation and its long-terms effects on people and landscape. Genocide, war, and displacement have been a constant for over 100 years in this area – starting with the Armenian Genocide of 1915 to 1922, followed by massive population displacements through the 1930s and 1940s, and continuing today with the Armenian-Azeri conflict over Artsakh. This latest war began in 1988, paused with a ceasefire in 1994, but only two years ago re-ignited with a full-scale Azeri attack on Armenia.

The photographers of “Borders” explore the human toll on this multigenerational conflict; the effects on the landscape and ecology, and whether there is hope of preserving vestiges of ancient cultures in this maelstrom of long-lasting state-sponsored violence.

“Borders” will run from March 20 to May 3 at Glendale Public Library’s gallery, ReflectSpace, located at 222 E. Harvard Street, Glendale, CA 91205. An opening reception will be held on Friday, March 20 from 7 to 9 p.m. Artists in the exhibition include German Avagyan, Areg Balayan, Matthew Karanian, Eric Grigorian, Scout Tufankjian, and the Houshamadyan Project with Silvina Der Meguerdichian. “Borders” is organized in collaboration with the Armenian National Committee of America – Western Region. The exhibition is dedicated to German Avagyan (1962-2020) and curated by Ara and Anahid Oshagan.

German Avagyan explores a deeply familial divide that is a fallout of war and border disruption. His project “Born After Death” consists of “double” portraits of men and women who were born after their fathers passed away on the battlefields in the first Azeri-Armenia war of 1990 to 1994. They hold photos or paintings of their fathers whom they never saw. The series is an eerie hybrid work, melding archive and conceptual portraiture. Not only do the double portraits include archival material in their frames but the project is an archive itself – a collection of 36 such double portraits. Buoyed by the extensive research in a war-ravaged landscape, Avagyan’s work is a testament to the ability of documentary photography to synthesize, encapsulate, and cross invisible borders of time and space. Avagyan’s untimely passing away earlier this year was a significant blow to the international photographic community and “Borders” is dedicated to his memory and his incessant spirit of exploration through photography.

Areg Balayan, winner of the Lens Culture international photography award, presents work from his new series “Consequence: Artefact.” Collaborating with artist Edik Boghosian, Balayan’s work is an attempt to “investigate and represent the aftereffects of the frozen military conflict in Nagorno-Karabakh,” writes Vigen Galstyan, curator and historian. “By taking an archaeological approach, these artists aim to break through the partisan barriers that divide people across enemy lines. The combination of salvaged metallic remnants from war-torn buildings and photographs of residents who live in the conflict zone is built on a fascinating interplay between historical traces and the living present. It is a space where trauma becomes naturalized and internalized, affecting the way people see their lives, the world, and the future.”

World Press Award winning photojournalist Eric Grigorian photographed a more recent war: a continuation of a long-standing border conflict. In April 2018, Azerbaijani forces attacked the Republic of Nagorno-Karbagh in what came to be known as the “Four Day War.” Having moved to Armenia several years ago, Grigorian responded immediately to the news of the attack, spending four days covering it. Unable to reach the actual front lines, he explored the secondary front line and spent time with soldiers preparing to enter the conflict. His work is a nuanced look at war and foregrounds the fragility of the current-day Azeri-Armenia border and its keepers, a space where deadly conflict can flare at any moment.

Matthew Karanian’s obsession is the historic Armenian Highland, most of which is also known as Western Armenia. He has been visiting it since 1997 when he was invited to a wedding and decided to stay behind to visit his grandfather’s home in the Van region. Since then, he has returned countless times looking for vestiges of state-sponsored erasure of Western Armenian culture and his own ancestral connectivity. He found his ancestral homeland to be fading and tattered. But he also found and connected to people living on that land – Turkish, Kurdish, part-Armenian. His photographs look across a divide of cultures and time to consider the complex relationship Armenians have to place and past – a relationship compounded by continued Turkish state denial of the atrocities that took place on that land.

Scout Tufankjian is an award-winning photographer who travels the world on assignment, and regularly visits Armenia. She presents a series of images of war-displaced Armenian populations living in villages along the Artsakh-Azerbaijan border, the so-called “green zone/liberated territories/occupied territories.” This is an area of potentially shifting status, at high risk of conflict and military posturing and used as a game piece in both a local conflict and a global proxy war. The villagers are natives of Artsakh, as well as economic and patriotic migrants from Armenia proper and Syrian refugees. Tufankjian’s photograph of President Barak and Michelle Obama was recently selected as one of the 100 most important photographs of the past decade by Time magazine.

In the “PassageWay,” artist Silvina DerMegeurdichian, the artistic director of the Houshamadyan Project, displays documents and narratives that cross borders. Drawing from the vast archives of the project, she has selected passports, identity papers, and documents of passage that reveal arcs of movement across borders and territories – from the Ottoman Empire before 1915 through to the Armenian diaspora. Presented in an innovative and interactive installation, the public is encouraged to touch and open the documents on display. Narratives accompany the installation and tell the history of the documents and their holders as they crisscrossed borders looking for stability and peace. Houshamadyan Project’s mission is to reconstruct and preserve the memory of Armenian life in the Ottoman Empire through research. For more information, visit the website.

ReflectSpace is an inclusive exhibition gallery designed to explore and reflect on major human atrocities, genocides, civil rights violations, and other social injustices. Immersive in conception, ReflectSpace is a hybrid space that is both experiential and informative, employing art, technology, and interactive media to reflect on the past and present of Glendale’s communal fabric and interrogate current-day global human rights issues. Read more on the ReflectSpace website.