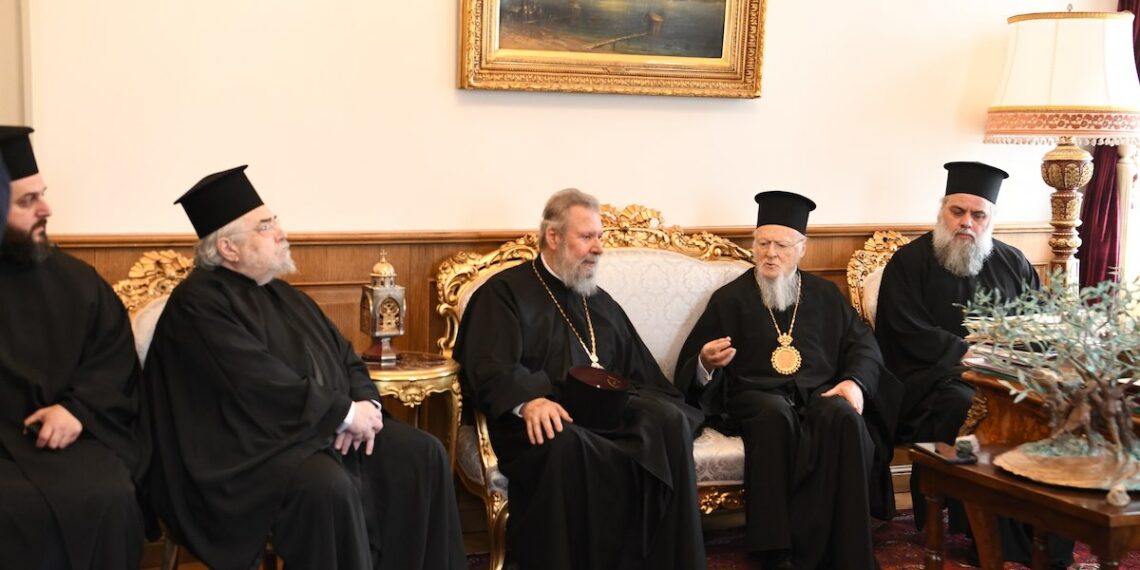 Ecumenical Patriarch: They are asking for Synod now. They should have recognised Pan-Orthodox Council of Crete and have come

Ecumenical patriarch Bartholomew welcomed Archbishop Chrysostomos of Cyprus, who, following an invitation by the Ecumenical Patriarch, visited Constantinople on Friday in order to concelebrate the Divine Liturgy on Sunday of Orthodoxy.

The Ecumenical Patriarch pointed out that he appreciated the interest and contribution of Archbishop Chrysostomos to the proper operation of the Church of Cyprus.

“You are a prudent and insightful guardian of our common heritage of Orthodoxy. I warmly welcome you to Constantinople. May God bless you with health so that you will be able to continue your work for the sake of the Church of Cyprus and all Orthodoxy.”

Archbishop Chrysostomos thanked the Ecumenical Patriarch for the invitation. He also thanked him for telling Archbishop of America to accommodate him during his recent visit to the United States for health reasons.

The Archbishop of Cyprus said that, after discussions he had with the Heads of some local churches, he urged them to respect the existing limits and not send their Bishops to other places that fall under different jurisdictions. He added that nationality came after Church order and tradition. In addition, he condemned such practices and, by way of example, he spoke of the stance taken by the Church of Cyprus.

The Ecumenical Patriarch thanked the Archbishop of Cyprus for his kind words and the position he took. He pointed out that, unfortunately, since the fall of communism, there was a resurgence of ethnophyletism in Church life. He added that there were political interests as well. “They move away from what the Tomos of Autocephaly of Orthodox Churches says and they become expansionist and hegemonic,” said the Ecumenical Patriarch.

He added, “They are asking for a Synod now! They should have recognised the  Pan-Orthodox Council of Crete and they should also have come there. But they did not. They must recognise these decisions because they were taken unanimously in Geneva. The texts are still the same. There are only some minor changes and improvements. These decisions were signed by all in Geneva in January 2016, and then, we went to Crete in the hope that all the Churches that signed these texts would be present. However, at the last moment, they did not come. Moscow led Antioch, Bulgaria, and Georgia down the garden path as well. Despite all that, we are still waiting for the decisions to be recognised. They told us that they sent them to special committees for further examination. It’s been four years since 2016, but they are still examining the decisions of the Pan-Orthodox Council.”

He further pointed out, “At the time when we were discussing the preparation of the Holy and Great Synod at the Patriarchal Church of St. George, the Patriarch of Moscow sent a delegation to the Church of Saint Eirini, where the Synod would take place. They were taking pictures of the Byzantine Church, where the Second Ecumenical Council was held. They wanted to find a place, where the Patriarch of Moscow, the Ecumenical Patriarch, and the others would sit. Then, when he visited the Patriarchal Church, he showed us the pictures taken. At the last moment, before the commencement of the Council, the delegation was trying again to find a place, where he and I would sit. Under such circumstances, how are we supposed to organise a Pan-Orthodox Council and a primates’ Synaxis? ”