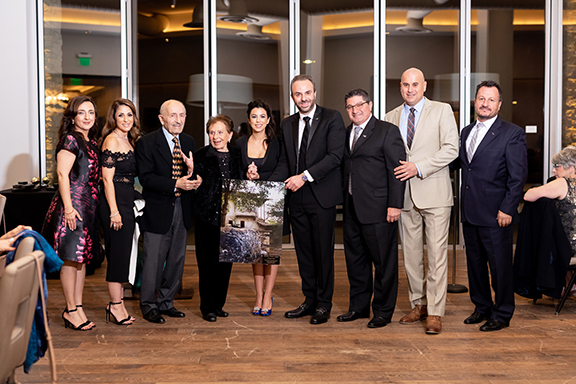 Emmy award winning Fox 11 news anchor, Araksya Karapetyan graciously attended “Daring to Dream” as the keynote speaker. In her heartwarming remarks, Karapetyan emphasized the importance of becoming the best versions of ourselves so that we can serve as an example to our children. Attendees were inspired by her own story of dreaming big and reaching great achievements.

Individual donors who have shown their unwavering support and have helped AGM reach so many of its dreams were also recognized during a legacy pinning ceremony. MC and School Board member Jibit Cinar gifted the donors with hand-made diamond, gold, or silver AGM pins.

During her remarks, Principal Sanan Shirinian expressed her gratitude for the unprecedented support AGM has received. “Don’t just give,” she said, “Give, and advocate for what you are giving to. Be the torchbearers of our vision, take ownership of this place that belongs to you, no matter if you have a child at the school or not.” She stressed that “the children of our community are all our children.”

The pinnacle of the evening was when distinguished guests Drs. Vahe and Armine Meghrouni, who recently made the largest single contribution to AGM in the school’s history, were recognized for their philanthropy. The announcement of their $325,000 donation was met with standing applause and joyful tears. The couple was then surprised with a video tribute about their life story, and gifted with an enlarged photo of Armine’s ancestral home in Kharpert. The engraving on the photograph read “in somnis veritas” – in dreams there is truth.

Every great dream begins with a dreamer.