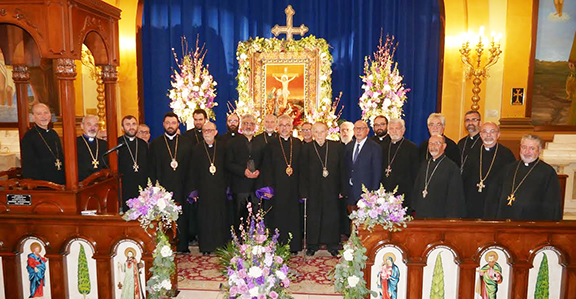 The 90th anniversary of the Holy See of Cilicia Seminary was fittingly celebrated within the Western Prelacy with a special program and concert, presided over by Western Prelate Archbishop Moushegh Mardirossian. The celebration was held on Wednesday, March 4 at St. Mary’s Church in Glendale.

In attendance were clergy members, Catholicoste Central Executive and the Prelacy Executive Council, representatives of community organizations, former Seminarians, and hundreds of faithful. The concert was presented by renowned tenor and Seminary alumnus Kevork Hadjian, who was invited from Armenia for this occasion. He was accompanied on the piano and organ by Hovsep Torossian.

The program began with opening remarks made by Vicar General Bishop Torkom Donoyan, who gave a historical overview of the Seminary’s establishment, recounting how the Catholicosate of the Holy See of Cilicia, after wandering for years under the leadership of Catholicos Sahag II of blessed memory, ultimately settled in Antelias in 1930 where the foundation was laid for the future hub for the formation of man, the Seminary. He added that countless clergy, lay leaders, and intellectuals who have brought great contributions to our nation have emerged from the Seminary.

Very Rev. Muron Aznikian presented the topic “The Seminary as an Educational Center,” regarding the Seminary as a sacred bastion for religious and national education and instruction where the flame of faith and love of nation was rooted in the essence of each and every Seminarian who went on to serve our people with that awareness and conviction.

Very Rev. Smpad Saboundjian spoke on “The Seminary as a family unit.” Citing His Holiness Catholicos Aram I’ sentiment that the Seminary is the beating heart of the Catholicosate, Fr. Smpad stressed that the Seminary is not merely a conventional institute for learning, it is a home where young Seminarians enter having left their family homes, a place that they grow to love and form a second family. He noted also that the Seminary became like an angel, easing the pains and troubles of the people through prayer.

Rev. Karekin Bedourian presented “The Seminary as a House of Prayer,” noting that prayer is a constant presence in the daily lives of Seminarians, beginning early in the morning, continuing during their free time outdoors, before and after meals, prior to classes, and during bedtime. He added that prayer forms the basis of a Seminarian’s life and service, leading them to place their absolute trust in God alone and leading others to God.

The concert followed, with Hadjian performing a number of spiritual and nationalistic songs.

Prelate Mardirossian then delivered the closing message. He began by commending the program’s speakers, the event organizers, as well as Hadjian and Torossian, and greeted Seminary alumni from the earlier generations, including Archbishop Vatche Hovsepian, who enrolled in 1944, and Archbishop Yeprem Tabakian, who enrolled in 1955.Reminiscing on his school years, he stated that the Seminary shapes character and instills s spirit of dedication in the hearts and minds of Seminarians at a very young age, adding, “The Seminary not only nurtured our thirsty minds and souls with religious and national nourishment, it reinforced our faith life.”

Prelate Mardirossian recalled the Catholicoi, deans, and teachers who put their heart, mind, and soul into fostering generations. He also lauded the Seminary Alumni Committee which has, for over two decades, offered moral and financial support to the Seminary by organizing a “Seminary Day” fundraiser each October, and also fittingly marked the 75th and 80th anniversaries of the Seminary in the presence of His Holiness Catholicos Aram I.

Finally, touching on the conflict and instability in the Middle East over the past few years and its effect on enrollment, the Prelate stated that this reality should give us more reason to encourage youth from our Prelacy to receive their education and instruction at the Seminary and return to serve our people in religious or national arenas. He concluded his message by calling on all to support the mission of the Seminary and contribute to its continued success and advancement.

The celebration concluded with the Prelate’s benediction and collective singing of “Cilicia,” after which a memento was presented to Hadjian as a token of commendation and appreciation.