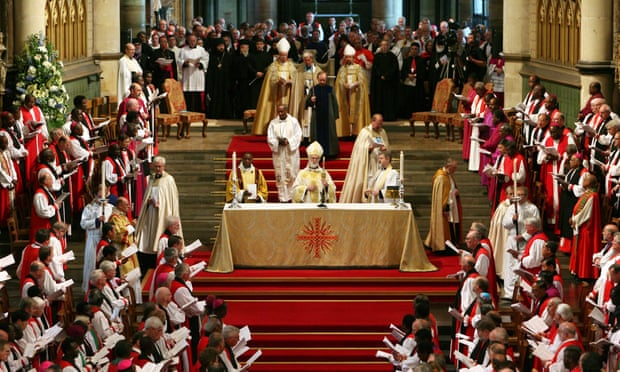 LGBT+ campaigners will hold a church service led by two high-profile married lesbian priests on the eve of the Lambeth conference, a once-a-decade assembly of Anglican bishops from around the world that is expected to be dominated by conflicts over sexuality and marriage.

The move is likely to rile conservative bishops who maintain that homosexuality is a sin.

An “inclusive” eucharist at a church in Canterbury will be presided over by the Rt Rev Mary Glasspool, an assistant bishop in New York. The preacher will be the Rev Canon Mpho Tutu van Furth, a daughter of Desmond Tutu, the veteran South African anti-apartheid campaigner.

The service is intended to send a strong message to up to 1,000 bishops from 165 countries who are due to gather at the University of Kent at the end of July for almost two weeks of prayer and discussion about issues facing the worldwide Anglican church.

The split over sexuality – between those who seek to uphold “biblical truth” and those who are pressing for acceptance and inclusivity – dominated the last Lambeth conference, in 2008, leading Rowan Williams, then archbishop of Canterbury, to warn that the church was in “grave peril”.

Tutu van Furth, who stepped aside as an Anglican priest in South Africa following her same-sex marriage and now lives in the Netherlands, told the Guardian that her message at the eucharist would be one of a “Christian welcome and hospitality”. She said: “Jesus was always determined to make those who society sees as outsiders be insiders.”

She said the church was slowly changing but she wanted to challenge “those in high places: look at what you’re doing.”

Glasspool, the first married lesbian bishop in the global Anglican church, said the inclusive service would carry an important message. “The LGBT+ community in the UK and other places might not understand that they are invited to celebrate at the Christian table. We need to make it known that everyone is included – all are invited to this particular celebration.”

She said Justin Welby, Williams’ successor as archbishop of Canterbury and leader of the Anglican church, had “gone out of his way to uninvite individual persons in a breach of hospitality”.

Bishops’ spouses have traditionally been guests at the Lambeth conference, but it was deemed “inappropriate” to invite same-sex spouses to this year’s event. Glasspool received a letter from Welby in December 2018 informing her of his decision “not to invite your spouse to the Lambeth conference, a decision that I am well aware will cause you pain, which I regret deeply.”

The letter came as a shock, Glasspool said. “It was unnecessary, it was creating an issue where one didn’t exist.” She suspects the move was intended to “appease” conservative Anglicans in the US.

The primates of Nigeria, Rwanda and Uganda, who are known to have staunchly conservative views on sexuality, have said they will not attend the Lambeth conference. So far 673 bishops and 521 spouses have registered.

The poll highlighted a generational difference, with more than two-thirds of Anglicans under the age of 50 backing same-sex marriage. Paul Bayes, the bishop of Liverpool, said the results “provide a challenge to us in leadership within the Church of England to ensure that we understand the views of the people we serve”.