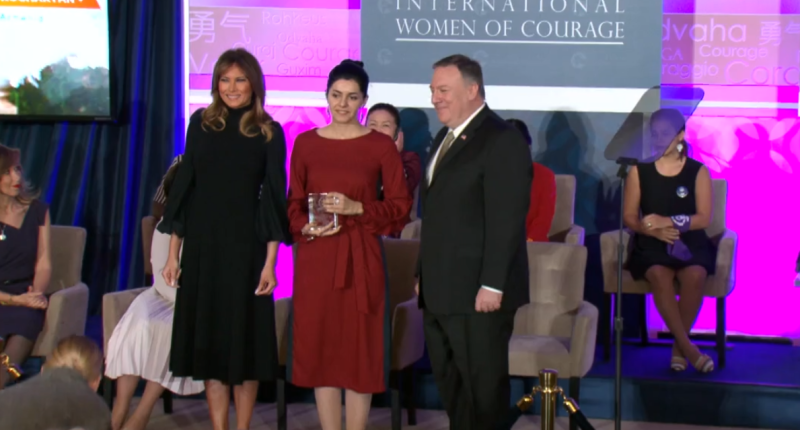 US First lady Melania Trump and Secretary of State Mike Pompeo honored recipients of the 2020 International Women of Courage Award at a State Department ceremony Wednesday.

The all-female award presented ahead of International Women’s Day on Sunday recognizes women across the world who demonstrate “exceptional courage and leadership” in the face of adversity and who have made a positive impact on their communities.

Using her platform as a journalist, Kocharyan has championed children with mental health issues and has emerged as a leading voice in the fight against psychological, physical, and domestic violence against women and children.

Kocharyan has become famous for launching “Voices of Violence” in August 2018. She has become a spokesperson on gender-based violence in Armenia and has continued to speak out despite harsh criticism – from people on the street who yell “shame” as she passes by, to parliamentarians speaking out against her and threatening her with lawsuits.

She successfully started a conversation about domestic and sexual violence that is slowly leading to some action. Gender-based violence is a pervasive problem throughout Armenia, where traditional social norms regarding masculinity, femininity, gender equality, and the division of household tasks remain rigid, making her achievements and impact all the more impressive.

Lucy Kocharyan hosts two programs on Public Radio of Armenia, where she raises issues of health, women and children.

Addressing the ceremony Melania Trump said “It is an honor to be here again to celebrate these inspiring women and the incredible impacts they are making through the work they have dedicated themselves to all over the world.”

“In my fourth year attending this ceremony, I continue to be inspired by the personal stories that accompany each of these extraordinary women. Some demonstrate raw courage in the face of terror,” she added.

“As first lady of the United States, I’m proud of what this country continues to do for women,” Trump continued, “and I’m honored to represent a nation that not only recognizes women around the world who are making a difference internationally but empowers and supports them in their endeavors so they can affect positive change for others.”

The first lady centered her remarks on courage and what the word means, including how it is related to other qualities like bravery and strength.
“These women represent the strength of the female spirit,” Trump said. “Each of them have demonstrated acts of courage and leadership, often at risk to their own personal safety.”

2020 award winners came from Afghanistan, Armenia, Azerbaijan, Bolivia, Burkina Faso, the Xinjiang Uyghur Autonomous Region of China, Malaysia, Nicaragua, Pakistan, Syria, Yemen and Zimbabwe. They have faced everything from death threats to lawsuits to social media harassment while taking on their leadership positions and attempting to make positive change.