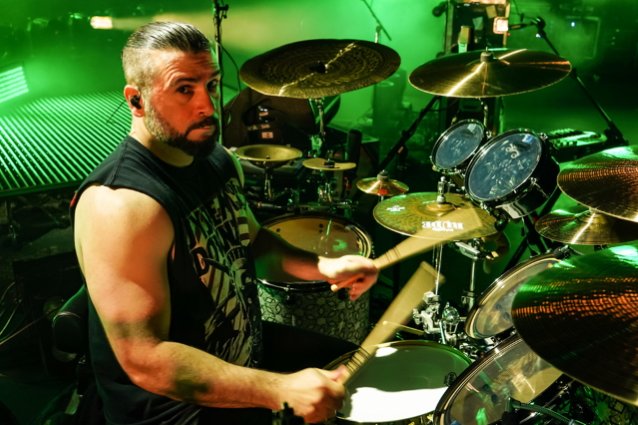 SYSTEM OF A DOWN drummer John Dolmayan spoke to The Pulse Of Radio about his upcoming comic book called Ascencia, which will arrive in April. A longtime comics fan, Dolmayan said: “It’s about the choices one would make if given the opportunity to live in a place that keeps you immortal. Like, who would you betray? Who would you screw over? It would test your moral fiber and it tests who you are as a person, make you question everything about yourself. It’s a sci-fi epic that I’m putting out as a monthly series. I’m self-publishing it, so I’m very proud of it.”

Before joining SYSTEM OF A DOWN, Dolmayan sold comic books for a living. He is the owner of Torpedo Comics, a high-end shop with locations in Orange, California and Las Vegas, as well as an online store.

Three years ago, Dolmayan told KSNV that he first started dealing at small Los Angeles-based baseball card and comic book conventions, shuttling boxes back and forth out of his 1988 Chevy Beretta. By age 25, he was making $60,000 a year selling comics.

Dolmayan released his debut solo album, “These Grey Men”, on February 28. The eight-track LP is an eclectic collection of reimagined songs Dolmayan was inspired by during many drives between Los Angeles and Las Vegas. “These Grey Men” features special guest artists including M. Shadows of AVENGED SEVENFOLD, Serj Tankian of SYSTEM OF A DOWN and Tom Morello of RAGE AGAINST THE MACHINE, among others, with a bulk of the album recorded at Dave Grohl‘s Studio 606.

All four members of SYSTEM OF A DOWN have given interviews in the last couple of years in which they indicated that they are unable to agree on how to “move forward” with a new album, the long-awaited follow-up to 2005’s “Mezmerize” and “Hypnotize”.