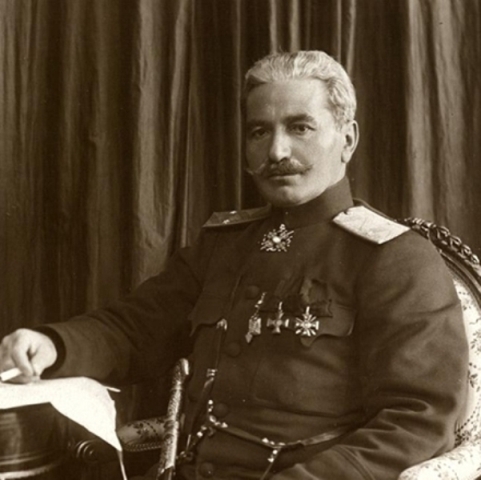 Andranik Ozanian was born in 1865 in Shabin-Karahisar, Sivas Vilayet, Ottoman Empire (modern Giresun Province of Turkey) to Mariam and Toros Ozanian. His paternal ancestors came from the nearby Ozan village in the early 18th century and settled in Shabin-Karahisar to avoid persecution from the Turks. His ancestors took the surname Ozanian in honor of their hometown.

Andranik became active in the Armenian armed struggle against the Ottoman government and Kurdish irregulars in the late 1880s. He joined the Armenian Revolutionary Federation (Dashnaktsutyun) party and along other fedayis, he sought to defend the Armenian peasantry living in their ancestral homeland; an area known as Turkish (or Western) Armenia – at the time part of the Ottoman Empire. His revolutionary activities ceased in 1904, when he left the Ottoman Empire. In 1907, Andranik left Dashnaktustyun because he disagreed with its cooperation with the Young Turks, a party which years later perpetrated the Armenian Genocide. In 1912–1913, together with Garegin Nzhdeh, Andranik led Armenian volunteers within the Bulgarian army against the Ottomans during the First Balkan War.

Since the early stages of World War I, Andranik commanded the first Armenian volunteer battalion and led them within the Russian Imperial army against the Ottoman army. After the Revolution of 1917, the Russian army retreated and left the Armenian irregulars outnumbered against the Turks. Andranik led the defense of Erzurum in early 1918, but was forced to retreat eastward. By May 1918, Turkish forces stood near Yerevan—the future Armenian capital. The Dashnak-dominated Armenian National Council declared the independence of Armenia and signed the Treaty of Batum with the Ottoman Empire, by which Armenia gave up its rights to Western Armenia. Andranik never accepted the existence of the First Republic of Armenia because it included only a small part of the area many Armenians hoped to make independent. Andranik, independently from the Republic of Armenia, fought in Zangezur against the Azerbaijani and Turkish armies and helped to keep it within Armenia.

Andranik left Armenia in 1919 and spent his last years of life in Europe and the United States. He settled in Fresno, California in 1922 and died five years later in 1927. Andranik is greatly admired as a national hero by Armenians; numerous statues of him have been erected in several countries. Streets and squares were named after Andranik, and songs, poems and novels have been written about him, making him a legendary figure in Armenian culture.

Andranik was first buried at Ararat Cemetery in Fresno, and his remains were moved to France and buried in Père Lachaise Cemetery in Paris on 29 January 1928. In early 2000, the Armenian and French governments arranged the transfer of Andranik’s body from Paris to Yerevan. The commander was re-interred at the Yerablur Pantheon in Yerevan on 20 February 2000, next to Vazgen Sargsyan.