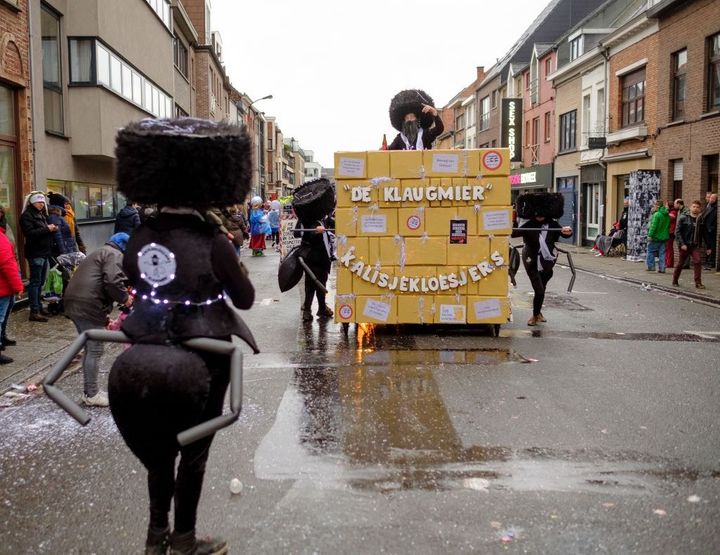 AALST, Belgium ( JTA ) — Belgium’s prime minister said that some caricatures of Jews at the annual Aalst parade “damage” the country’s values and reputation.

In a statement Sunday, Prime Minister Sophie Wilmes, who is Jewish, did not say which caricatures she took issue with at the Aalst Carnival, which is held each year in this city 10 miles west of Brussels. But her statement was the harshest rebuke yet by Belgium’s highest elected official of the Aalst Carnival, which has for years drawn controversy for its ridicule of ethnic minorities, including Jews.

This year’s procession included costumes of haredi Jews with ant abdomens and legs. The 12 men wearing those suits set up a display called “complain ant,” a phrase that in Dutch resembles the word for the Western Wall. They wore stickers reading “obey” on their lapels.

Another group wore haredi-style suits and plastic hooked noses and waved a sign of “regulations” that included one reading: “Do not tell the truth about Jews.” Several dozen spectators also wore haredi suits with fake sidelocks.

About 80,000 people came to see the event, which had thousands of participants.

Last year, UNESCO withdrew its recognition of the Aalst Cranival as a world heritage event following the depiction of Jews at that year’s event. One float featured two effigies of haredi Jews holding bags of money and grinning. One of the effigies had a rat perched on its shoulder.

Aalst Mayor Christoph D’Haese defended the display as a mere expression of “the irreverent spirit” of Aalst.

In her statement Sunday, Wilmes wrote: “The federal government is sensitive to the reactions to some floats and costumes at the carnival.” Whereas the event is “much more than only that,” she wrote, ”these actions damage our values and the reputation of our country.”

At a press conference, D’Haese called Wilmes’ statement “bizarre” and invited her to view next year’s parade so “she can form her opinion based on facts.” He has defended the right of participants to mock Jews and other minorities as a form of satire. He called the event Sunday a “display of unity.”

People dressed as Rabbis, and as ants parade during the 92nd edition of the Aalst Carnival parade on February 23, 2020 in the streets of Aalst, Belgium.