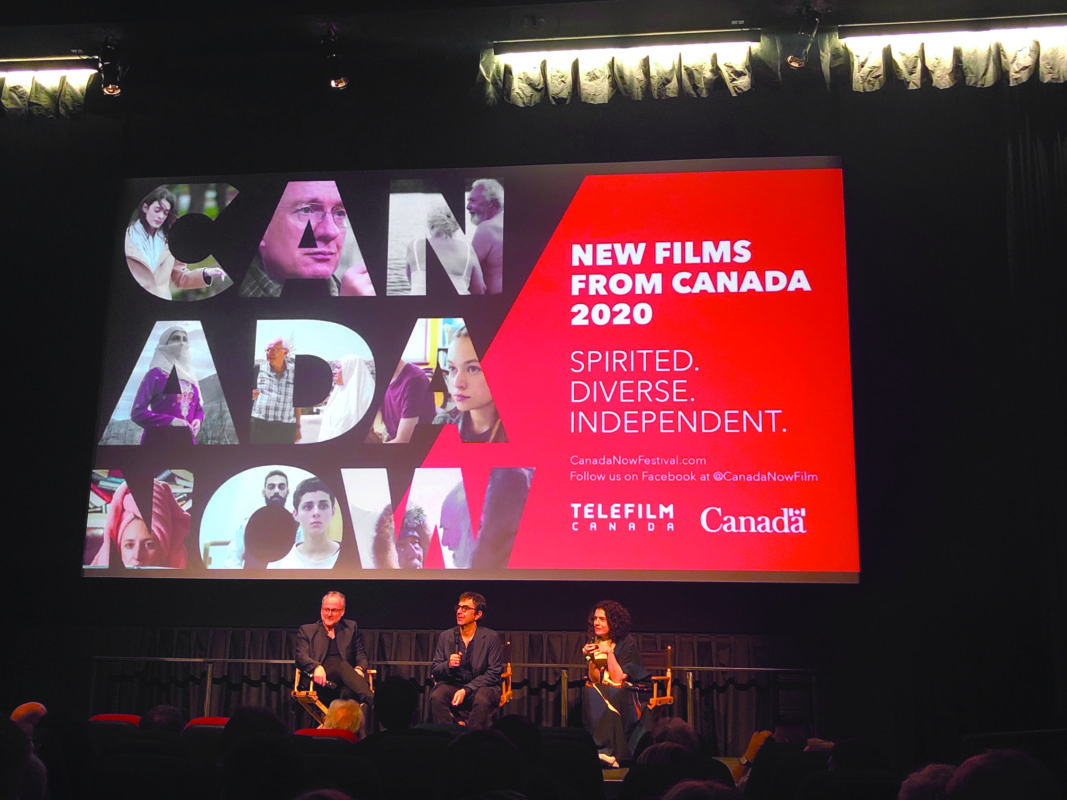 NEW YORK — The United States premiere of Canadian-Armenian auteur Atom Egoyan’s latest film, “Guest of Honour,” was screened at the IFC Center in the West Village and featured a live in-person, question-and-answer session with the award-winning filmmaker alongside his wife, actress Arsinée Khanjian, during the Canada Now festival that took place from Thursday, February 13 through Sunday, February 16.

The psychological family thriller starring David Thewlis, Laysla De Oliveira and Luke Wilson, kicked off the Canada Now series, a four-day traveling film festival geared towards highlighting the foremost cinema from the country. The film, which marked its world premiere at the Venice Film Festival last September, revolves around a father-daughter relationship over a 15-year period that explores trauma, memory and forgiveness.

When Veronica (Laysla De Oliveira) is asked by Father Greg (Luke Wilson) about her father, Jim (David Thewlis) so he can write a proper eulogy for his funeral, the film flashes back to their troubled relationship that was one of secrecy and deception. A restaurant health food inspector by profession, Jim tries to make amends with his daughter, a high school music teacher, who is in prison for inappropriate behavior with her students.

According to Egoyan, the origin of the story traced back to his son’s experience at an esteemed French restaurant in Toronto a decade ago, where the chef was tormented by a food inspector. That anecdote, along with a New York Times article about the downward spiral of a chef after the closing of a well-known brasserie due to negative reports, formed the core of the film’s plot.

Egoyan spoke about the occupations that characters hold in his films, from a customs agent (“Ararat”) to a bus driver (“The Sweet Hereafter”) to an insurance adjuster (“The Adjuster”) and how their trades affect their personas.

“These characters choose these jobs because they have access to issues they otherwise don’t in real life,” said Egoyan. “Jim hasn’t been able to resolve his problems in his personal life but in his job as a restaurant health inspector there is purpose and consequence.”

Known for depicting interesting portraits of characters, Egoyan, who was born in Cairo, Egypt and raised in Victoria, British Columbia, has always been driven by his “fascination and mystery of humans” while purposefully creating “vagueness and ambiguity” in his films.

By connecting the past and the present, Egoyan explores how childhood traumas can ultimately mold contemporary circumstances. While Jim is convinced his daughter is innocent and works to get her a reduced sentence, Veronica refuses to cooperate and is steadfast in her desire to remain in prison. In the present day, Father Greg, who at first doesn’t seem to know Jim since he wasn’t a churchgoer, reveals to Veronica that he did indeed have a previous encounter with him after she confides in him about her family’s secrets.

“These three characters all break code in order to find resolutions,” said Egoyan about the film which was an official selection in Venice, Toronto, Vancouver, London and Busan. “The characters, who find themselves trapped and self-medicated, think they can create therapeutic solutions for themselves.”

The film is structured in a non-linear fashion with two framing devices, that of the priest and the daughter and the other of the father and the daughter, while still making it accessible for the viewer. Egoyan noted that his films are inspired by “extraordinary transference,” such as how Father Greg makes a public statement on Jim’s life through the eulogy, basing it only on what his daughter shares with him.

The idea for the storyline of Father Greg was rooted in Khanjian’s experience when her father passed away and their local parish priest asked her about him for the eulogy.

“It was unexpected because my father had a history with that church and I thought the priest would know more about my father socially,” said Khanjian, an Armenian-Canadian actress and producer who is a regular figure in Egoyan’s films. “I was confused at first about where to start, but Atom was more excited about the question than me.”

From there they veered deeper into the plot and included a pivotal thread of Jim inspecting an Armenian restaurant, owned by Khanjian’s character, who evades a citation from the inspector through her quick thinking. The restaurant is also the setting for Jim’s catharsis during a private Armenian family gathering, where he refers to the red wine as “His Blood,” which according to Egoyan meant to convey that “religion means something to this character.”

Regarding their professional and personal partnership, Egoyan said his wife of 35 years is always the first to read his scripts, which are a “valuable and an important part of how the films are shaped.”

“I’ve learned how to read his scripts and ask the real questions but I don’t let it go if I’m not convinced of the answers,” said Khanjian.

Egoyan gives credit to the performers who deliver his lines and are able to maintain the audience’s attention by “breathing life into it.”

“As a writer you’re grateful the actors can pull it off because it’s a tall order, otherwise all of your writing insecurities and vulnerability come out,” said Egoyan. “It’s up to the performer and that’s the magic of cinema.”

The film was further enhanced by the musical score, composed by Mychael Danna, who Egoyan referred to as a “storyteller with brilliant visual composition.” Danna, who won the Academy Award for Best Original Score for “Life of Pi,” composed the scores motifs to complement the character of Veronica, her musical profession and how she comes to terms with incarcerating herself.

One of Egoyan’s main influences in cinema has been Sergei Paradjanov, the imaginative Soviet-Armenian filmmaker known for his bold use of colors and stylistic departure from cinematic realism.

“In my past films, Paradjanov has been very influential, especially with his use of tableaux,” said Egoyan. “When an artist leaves an impression on you, it’s always there.”

Regarding his writing process, Egoyan acknowledged that he has an “antenna” up, noticing many things he wouldn’t usually be sensitive to when writing a script. He also touched upon how to communicate a story and present the exposition of plot through characters such as the priest, Father Greg, who asks about Jim’s life in a way that can access a lot of history. Overall, Egoyan ties together various components to create his own visual and narrative style.

“I find an element of absurdity in my films and elements of humor,” said Egoyan. “Films are a dream state and they don’t have to be held by a conventional linearity in terms of how a story can be told.”

Spearheaded by Telefilm Canada and the Consulate General of Canada in New York City, with the support of Air Canada, Canada Now features both veteran and emerging filmmakers who tackle a range of themes from the immigrant experience to race relations to personal dramas to documentaries, all the while highlighting the independent, diverse and creative spirit that is the hallmark of Canadian cinema.

In his opening remarks, Tom McSorley, curator of Canada Now, welcomed everyone and noted that “a lot of Canadian love has come from the North for this amazing celebration of Canadian filmmaking.”

Khawar Nasim, deputy consul general, said his office was honored to be involved in the Canada Now festival as it’s an “appealing way for us to show our stories through award-winning filmmakers like Atom Egoyan.”

“Telefilm is a longtime supporter of Atom’s work and ‘Guest of Honour’ is a twisted and provocative tale that keeps you guessing,” said Bourdages. “The brilliant performances from the stellar cast reminds us why Atom is the premier foremost filmmaker in Canada today.”