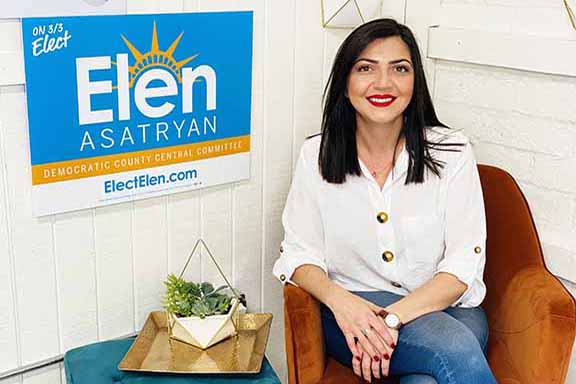 The city officials have worked closely alongside Elen during her two-decade-long political activism and advocacy career.

“I have known Elen for over 20 years, since she was just 16-years-old. Not only is Elen a champion for the Democratic Party, but she has also led one of the largest advocacy organizations in our community. Elen is an honest and resilient activist who fights for Democratic values, proper representation, and civil and human rights. She has also led many successful campaigns and community initiatives, and she will be a valued addition to the County Central Committee,” stated Los Angeles City Councilmember Paul Krekorian.

“I’m grateful for the overwhelming support received by organizations and community leaders with whom I have a shared vision for governing that includes an emphasis on encouraging public participation in the civic process, government transparency, and ensuring that underrepresented communities have a seat at the table,” said Asatryan. “Volunteering, and then eventually working, on both Councilmember Krekorian and former Glendale Mayor Manoukian’s campaigns sparked my passion for politics and public service early on. These endorsements are both humbling and a reminder of the values I hope to bring to LACDP,” she added.

As a first-generation immigrant, Elen, with her family, moved from Armenia to Glendale at the age of 10, where she then attended Columbus Elementary School, Toll Middle School, and Hoover High School. Elen was a 15-year-old when she volunteered on her first political campaign, and she never stopped championing for causes or candidates from that point forward. Elen went on to graduate from the University of California Los Angeles, where she studied Political Science with concentrations in American Politics and International Relations then serving as Executive Director of advocacy organizations overseeing 19 western U.S. states. In 2017, she founded The Stark Group—a consulting firm specializing in public affairs, nonprofits, and political campaigns.

“I am excited for Elen Asatryan’s candidacy for the County Central Committee, and I am proud to endorse her. Throughout her career, Elen has invested her time and energy into empowering the community, with great results. When she is elected to the Central Committee, I am confident that Elen will continue to be a champion for social justice,” commented David Ryu, Los Angeles Councilmember District 4.

“While working for the City of Glendale and in my current role as the elected Burbank City Clerk, I have had the pleasure of working with Elen on many community projects. I found her to be very committed, dedicated, highly energetic, and always willing to go the extra mile to get the job done. I am honored to support and endorse Elen for the Democratic County Central Committee,” commented Burbank City Clerk Zizette Mullins.

In her mission to ensure that all voters, regardless of gender, race, ethnicity, and economic background have equal access to the democratic process, Elen developed and implemented voter registration and ‘Get Out the Vote’ initiatives resulting in over 50,000 newly registered voters in two years’ time in L.A. county alone and record-breaking voter turnout in some of the most heated local, state, and federal elections. Elen continues her service to voter inclusivity by serving on both the Los Angeles Voter Outreach Committee and Los Angeles City Votes Voter Outreach and Education Committee.

“Elen was fifteen 15-years-old when her dad used to drop her off at our campaign office. She worked for hours and hours almost every day and when her dad came, he would have to sit and wait outside for her to be ready to leave. She would not leave voluntarily, she had to be forced to leave so her dad could go home,” remarked former Glendale City Mayor and current City Treasurer Rafi Manoukian at a recent campaign event.

“Elen has been involved in political campaigns and the fight for minority rights, human rights, and recognition from the first day that I remember her and I believe that she will continue that. When you look at candidates and talk about elections, don’t vote for a person who makes a promise, vote for the individual based on their character. Elen is the most hardworking and dedicated individual to the Democratic ideals, and she has my confidence and support,” continued former Glendale City Mayor and current City Treasurer Rafi Manoukian.

The election for the Democratic County Central Committee will take place between February 22 and March 3 at 1,000 vote centers across L.A. County. Registered Democrats residing in State Assembly District 43, and those who have declined to state a political party but have requested a Democratic ballot, will see Asatryan’s name on their ballot.

For voters who have selected the option to vote by mail, ballots started arriving in mailboxes as of February 4. Elen Asatryan’s name may be found on page 3, 4 or 5 of the ballot.

For those not yet registered to vote, same-day voter registration is available in person at any vote center between February 22 and March 3. To register to vote, update voter information and political party preference, request a vote by mail ballot or find your nearest vote center. lavote.net