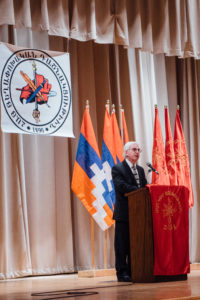 The Imperative of a United and Strong Opposition

In the parliamentary elections following the May 2018 events, receiving more than 70 percent of the vote and declaring themselves the “sole and real” representatives of the people, the Armenian authorities represented by the “My Step” political alliance resorted from the start to classical populism to cover up and rationalize their ineptness and the reason why their lavish promises to the people are still left unfulfilled. They waste no opportunity to overtly reject or disregard not only the opposition political parties and their views and proposals regarding the prosperity and political stability of the country, but also reject that segment of society that dares to disagree with them.

Twenty months have passed since the May 2018 purported revolution, but the government is getting more and more entrenched in the ways of populism with no change in sight. A government that is outwardly democratic but deliberately intends to perpetuate itself as the “sole and real” representative of the people. Using a distorted and sometimes even vulgar vocabulary unbefitting to any political leadership, they continue to discredit and reject all forms of opposition and pluralism in general. As a result of their irresponsible behavior and policies, the concept of separation of powers among the three branches of the government (executive, legislative and judiciary) is gradually being distorted. Furthermore, the government’s now overt attempts to subjugate the police and the national security service demonstrate clearly the inherent danger in their actions that if left unchallenged will ultimately lead to a one-party monopoly of the country’s institutions threatening their already fragile democratic fabric.

Aiming to deliberately divide the society between blacks-and-whites, revolutionaries-and-anti-revolutionaries, the populist government is consciously staying true to the old adage: divide and conquer. Furthermore, the intention to keep the past (manifested by failures of the previous regime) at the forefront of people’s attention, they aim to justify their inability to plan and execute effective policies, claiming that “dark hands” and “conspirators” with strong ties to the previous regime are behind these failures, without even the slightest sense of obligation towards the people to name any names that allegedly stand behind these conspiracies.

In this context and in the realm of this unhealthy reality, what can the opposition, who sees the gradual erosion of democracy and disintegration of the system of national values, do? How can the opposition political parties and that segment of society who disagrees with the way the country is being run fight back?

What to do and how?

One of the most effective methods of combating populism is by forming a UNIFIED and strong opposition. An opposition that keeps its distance from petty issues and bickering and focuses on the real issues facing the country and the people in a forceful attempt to unite the people around such important national and pan-national social and political agendas including but not limited to a clear and articulated policy vis-a-vie Artsakh, a strong national economic development policy, a strong national educational policy and a strong diaspora policy. A UNIFIED and strong opposition adopting an agenda such as the one described above could and will directly oppose the populist government’s attempts to divert the people’s attention from the real agendas facing the country and the nation and will expose their “divide and conquer” damaging strategy. An opposition formed by the consolidation of political factions and parties around the aforementioned agendas, with the primary goal of using all tools of democracy including extraordinary parliamentary elections to force the government to abandon their destructive strategies and begin the healing process by restoring a healthy moral and psychological atmosphere in the society, a prerequisite for the development and prosperity of any country.

This was precisely what the Armenian Revolutionary Federation (ARF) Supreme Council of Armenia was trying to achieve when it embarked on extensive consultations with parliamentary and extra-parliamentary political factions aiming to become the axis around which these factions would ally to confront the populist government and force a healthy discourse around important national and pan-national agendas facing the nation. A long-term proposition that will definitely produce positive results.

It is time for serious and systematic reforms to take place in our country to stop the distortion of the democratic image (and not only) of the country by the current authorities. It is imperative that the political parties and that segment of the people who believe in the urgency of these reforms join together to form a UNITED and strong opposition.

Only a UNITED and strong opposition can have a decisive and positive impact on social, economic and political processes in our country at this juncture.

Mourad Manoukian is a longtime resident of Watertown, MA and an active member of the Watertown Armenian community. Chemical engineer by schooling, his areas of interest span a wide spectrum of social and political issues both in Armenia and the diaspora.