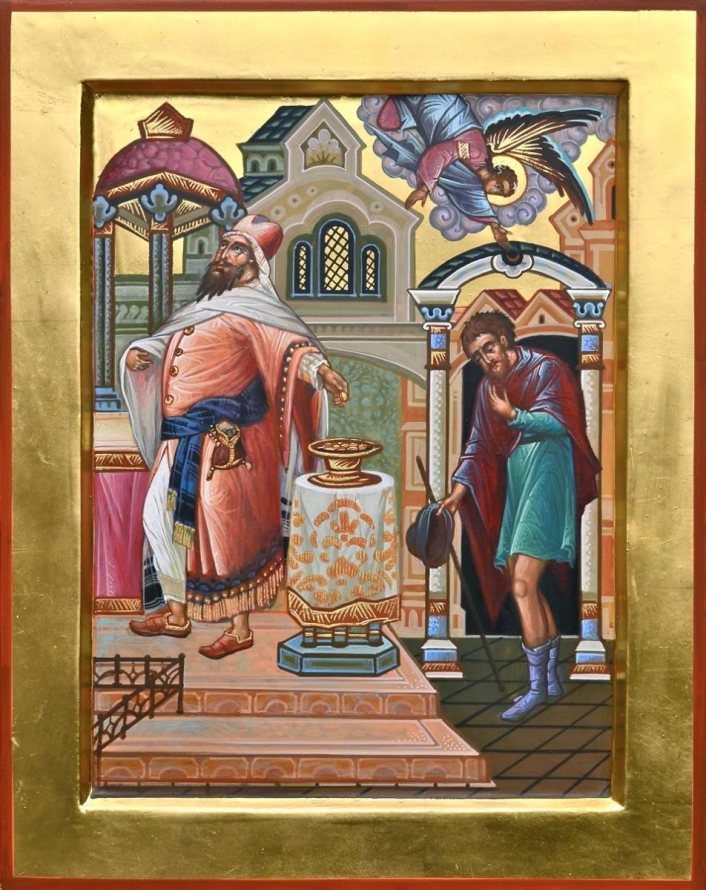 Leavetaking of the Meeting of our Lord in the Temple; St. Martyr Nicephorus of Antioch; 33rd Sunday after Pentecost (Publican and the Pharisee); Triodion begins

The Holy Martyr Nicephorus lived in the city of Syrian Antioch. In this city lived also the presbyter Sapricius, with whom Nicephorus was very friendly so that they were considered as brothers. They quarreled because of some disagreement, and their former love changed into enmity and hate.

After a certain time, Nicephorus came to his senses, repented of his sin and more than once asked Sapricius, through mutual friends, to forgive him. Sapricius, however, did not wish to forgive him. Nicephorus then went to his former friend and fervently asked forgiveness, but Sapricius was adamant.

At this time the emperors Valerian (253-259) and Gallius (260-268) began to persecute Christians, and one of the first brought before the court was the priest Sapricius. He firmly confessed himself a Christian, underwent tortures for his faith and was condemned to death by beheading with a sword.

As they led Sapricius to execution, Nicephorus tearfully implored his forgiveness saying, “O martyr of Christ, forgive me if I have sinned against you in any way.”

The priest Sapricius remained stubborn, and even as he approached death he refused to forgive his fellow Christian. Seeing the hardness of his heart, the Lord withdrew His blessing from Sapricius, and would not let him receive the crown of martyrdom.

At the last moment, he suddenly became afraid of death and agreed to offer sacrifice to idols. In vain did Saint Nicephorus urge Sapricius not to lose his reward through apostasy, since he already stood on the threshold of the heavenly Kingdom.