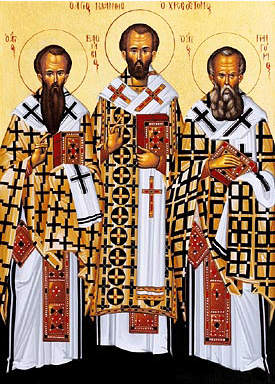 Feast of the Three Holy Fathers, Great Hierarchs and Ecumenical Teachers, Basil the Great, Gregory the Theologian, and John Chrysostom

During the reign of the Emperor Alexius Comnenus (1081-1118), a controversy arose in Constantinople among men learned in Faith and zealous for virtue about the three holy Hierarchs and Fathers of the Church, Basil the Great, Gregory the Theologian and John Chrysostom. Some argued for Saint Basil above the other two because he was able, as none other, to explain the mysteries of the Faith, and rose to angelic rank by his virtues. Organizer of monastic life, leader of the entire Church in the struggle with heresy, austere and demanding shepherd as to Christian morals, in him there was nothing base or of the earth. Hence, said they, he was superior to Saint Chrysostom who was by nature more easily inclined to absolve sinners.

The partisans of Saint Chrysostom retorted that the illustrious Archbishop of Constantinople had been no less zealous than Saint Basil in combating vices, in bringing sinners to repentance and in raising up the whole people to the perfection of the Gospel. The golden-mouthed shepherd of matchless eloquence has watered the Church with a stream of homilies in which he interprets the divine word and shows its application in daily life with more accomplished mastery than the two other holy Doctors.

According to a third group, Saint Gregory the Theologian was to be preferred to the others by reason of the majesty, purity and profundity of his language. Possessing a sovereign mastery of all the wisdom and eloquence of ancient Greece, he had attained, they said to such a pitch in the contemplation of God that no one had been able to express the dogma of the Holy Trinity as perfectly as he.

With each faction setting up one of the Fathers against the other two in this way, the whole Christian people were soon caught up in the dispute, which far from promoting devotion to the Saints in the City, resulted in nothing but ill-feeling and endless argument. Then one night the three holy Hierarchs appeared in a dream to Saint John Mauropus, the Metropolitan of Euchaïta (5 Oct.), separately at first, then together and, speaking with a single voice, they said: “As you see, the three of us are with God and no discord or rivalry divides us. Each of us, according to the circumstances and according to the inspiration that he received from the Holy Spirit, wrote and taught what befits the salvation of mankind. There is not among us a first, a second or a third, and if you invoke one of us the other two are immediately present with him. Therefore, tell those who are quarrelling not to create divisions in the Church because of us, for when we were on earth we spared no effort to re-establish unity and concord in the world. You can conjoin our three commemorations in one feast and compose a service for it, inserting the hymns dedicated to each of us according to the skill and knowledge that God has given you. Then transmit it to the Christians with the command to celebrate it each year. If they honor us thus as being with and in God, we give them our word that we will intercede for their salvation in our common prayer.” At these words, the Saints were taken up into heaven in a boundless light while conversing with one another by name.

Saint John immediately assembled the people and informed them of this revelation. As he was respected by all for his virtue and admired for his powerful eloquence, the three parties made peace and every one urged him to lose no time in composing the service of the joint feast. With fine discernment, he selected 30 January as appropriate to the celebration, for it would set the seal to the month in which each of the three Hierarchs already had a separate commemoration (Saint Basil – January 1; Saint Gregory – January 25; Saint John (translation of relics) – January 27).

The three Hierarchs—an earthly trinity as they are called in some of the wonderful troparia of their service—have taught us in their writings and equally by their lives, to worship and to glorify the Holy Trinity, the One God in three Persons. These three luminaries of the Church have shed the light of the true Faith all over the world, scorning dangers and persecutions, and they have left us, their descendants, this sacred inheritance by which we too can attain to utmost blessedness and everlasting life in the presence of God and of all the Saints.

With the feast of the three Hierarchs at the end of January—the month in which we keep the memory of so many glorious bishops, confessors and ascetics—the Church in a way recapitulates the memory of all the Saints who have witnessed to the Orthodox faith by their writings and by their lives. In this feast we honor the whole ministry of teaching of the holy Church, namely, the illumination of the hearts and minds of the faithful through the commemoration of all the Fathers of the Church, those models of evangelic perfection which the Holy Spirit has raised up from age to age and from place to place to be new Prophets and new Apostles, guides of souls heavenward, comforters of the people and fiery pillars of prayer, supporting the Church and confirming her in the truth.

Adapted from The Synaxarion: The Lives of the Saints of the Orthodox Church, Vol. 3, compiled by Hieromonk Makarios of Simonos Petra and translated from the French by Christopher Hookway (Chalkidike, Greece: Holy Convent of the Annunciation of Our Lady, 2001) pp. 352-354.

Icon of the Feast

The Three Hierarchs are depicted in the icon of the feast full-bodied and in a frontal pose. They are dressed in their hierarchical vestments, indicating their position as bishops of the Church. Saint John Chrysostom stands between Saint Basil (to his right) and Saint Gregory (to his left).

Each Hierarch holds a closed gospel book, signifying their roles as great teachers and preachers of the Church. Saint John and Saint Basil are giving the traditional blessing with their right hand, and Saint Gregory has his hand respectfully resting over the gospel book. Saint Gregory and Saint Basil hold the gospel with their left hands covered by the phelonion and omophorion as a sign of special respect.

Orthodox Christian Celebration of the Feast of the Three Hierarchs

The Feast and commemoration of the Three Hierarchs is celebrated with the Divine Liturgy of Saint John Chrysostom which is conducted on the morning of the feast and preceded by a Matins (Orthros) service. A Great Vespers is conducted on the evening before the day of the Feast.

In many Greek Orthodox parishes the Feast of the Three Hierarchs is combined with a celebration of Greek Letters. This usually includes special events which are dedicated to the preservation and promulgation of the ideals of Orthodox Christianity and Hellenic education. The Three Hierarchs were great men of letters who were not only defenders of Orthodox Christianity, but supporters of Greek learning. The relationship of these Fathers of the Church to education and learning is addressed in an article on our web site byRev. Dr. Demetrios J. Constantelos entitled “Hellenic Paideia and Church Fathers – Educational Principles and Cultural Heritage.”

Hymns of the Feast

The three most great luminaries of the Three-Sun Divinity have illumined all of the world with the rays of doctrines divine and true; they are the sweetly-flowing rivers of wisdom, who with godly knowledge have watered all creation in clear and mighty streams: The great and sacred Basil, and the Theologian, wise Gregory, together with the renowned John, the famed Chrysostom of golden speech. Let us all who love their divinely-wise words come together, honoring them with hymns; for ceaselessly they offer entreaty for us to the Trinity.

Receive, O Lord, the Sacred Heralds who preached God, the pinnacle of Teachers, unto the enjoyment of Your riches and rest. You have received their labors and their suffering as being above and beyond all fruitful offering. For You alone glorify Your Sain