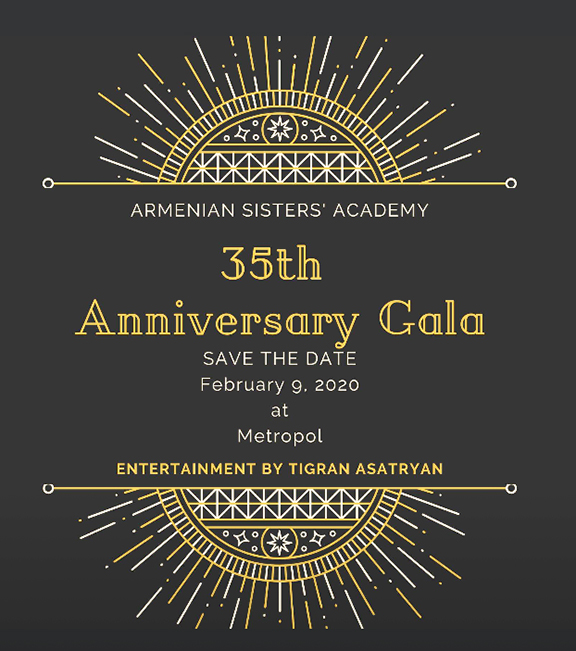 “A year of celebration, A year of change” is the aphorism of the year for Armenian Sisters’ Academy. To highlight this, the school is celebrating the milestone with a gala recognizing its veteran teachers and acknowledging the impact it has made on the Armenian community over the past 35 years. Some of ASA’s teachers have been at the school for over 20 years and are still going strong.

Armenian Sisters’ Academy was founded in 1985 by Sister Hripsime Chieftelian and Sisters to help preserve and perpetuate the ethnic Armenian identity. It is one of two schools in the United States operated by the order of the Armenian Sisters of the Immaculate Conception. ASA and its Sisters provide opportunities for Armenian youth to learn the religion, language, history, and cultural traditions of their Armenian forefathers.

ASA first opened with the intent of providing a loving and caring environment for Armenian youth and was led for the first ten years by Sister Hripsime Chieftelian and her vision. Sister Alphonsa Bedrossian, who became principal after Sister Chieftelian, had the foresight and vision to move the school to its current location at 2361 Florencita Drive, in Montrose, Calif.

Sister Yevotksia Keshishian, the third principal, nurtured the school by fostering great relationships with parents and the community. Sister Lucia Al-Haik followed by creating a parent advisory board with whom she worked tirelessly to enhance the technology at the school and implement multiple policies and procedures to make the school more effective and efficient. Sister Lucia remains at the school as Head of School and supervises the religious education.

The 2019 to 2020 academic year began with a shift in leadership. Dr. Julio Tellez joined ASA to streamline the academic rigor and foster high academic standards. The school, however, continues to provide the essential elements that make ASA a cornerstone of education for Armenian families: religion, language, history, and cultural traditions of Armenia in the Los Angeles diaspora and beyond.

“We have a great school,” remarked Dr. Tellez, “the faculty and staff are very dedicated, the parents are very involved, and the students have great potential.” The school is working on implementing a science, technology, engineering, and mathematics Curriculum to provide its students with inquiry-based projects, hands-on learning, and a stronger understanding of math and science.

The gala will be held on Sunday, February 9 at the Metropol, located at 701 S Central Ave, Glendale, CA 91204. Entertainment will be provided by Tigran Asatryan.