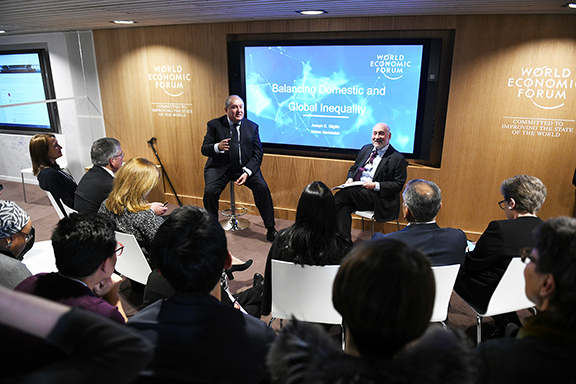 President Armen Sarkissian was at the World Economic Forum in Davos, Switzerland where on the margins of the official program he met with world and business leaders, among them the leaders of Apple, Microsoft and Mitsubishi.

During his meeting with Mitsubishi Group’s Heavy Industries board chairman Shunichi Miyanaga, Sarkissian discussed cooperation, as well as opportunities to apply Mitsubishi Heavy Industries’ advanced technologies and expertise in Armenia.

The also discussed ATOM (Advanced Tomorrow), an initiative of President Sarkssian, which is aimed at the development of modern technologies based on artificial intelligence, management of large volumes of data and mathematical modeling, the parties agreed that they could become partners in this area.

Sarkissian and Miyanaga exchanged views on issues pertinent to nuclear fuel and management of nuclear waste.

Sarkissian also met with Vice President Microsoft, Judson Althoff, with whom areas of cooperation and joint ventures were discussed, with the president highlighting opportunities for Armenia to become a technological and educational hub.

Althoff said that Microsoft is interested in cooperation in the ATOM initiative, particularly in the areas of artificial intelligence, mathematical modeling, and some others. The two also discussed a possible memorandum of understanding to jump start the cooperation.

Sarkissian delivered a keynote address entitled “Balancing Global and Domestic Inequality,” which focused global developments, global risks, new quantum technology and systems, the quantum behavior of politics, about which he has written extensively, and the directions and trends of development of the modern world. He was joined on stage Nobel laureate in economics Joseph Stiglitz.

Sarkissian also met with the President of National Council of Switzerland Isabelle Moret, who is also the head of Switzerland-Armenia friendship group.

The meeting focused on advancing Armenia-Switzerland relations and highlighted the critical role inter-parliamentary cooperation plays in enhancing ties. The two exchanged views on opportunities for partnership and joint projects in high-tech and innovations, as well as science and food safety.

At the invitation of President Reuven Rivlin of Israel, Sakissian will attend the Fifth World Holocaust Forum in Jerusalem on Thursday.

The Forum, entitled “Remembering the Holocaust: Fighting Anti-Semitism,” will be held in Yad Vashem on January 23 to mark the 75th anniversary of the liberation of Auschwitz and International Holocaust Remembrance Day.