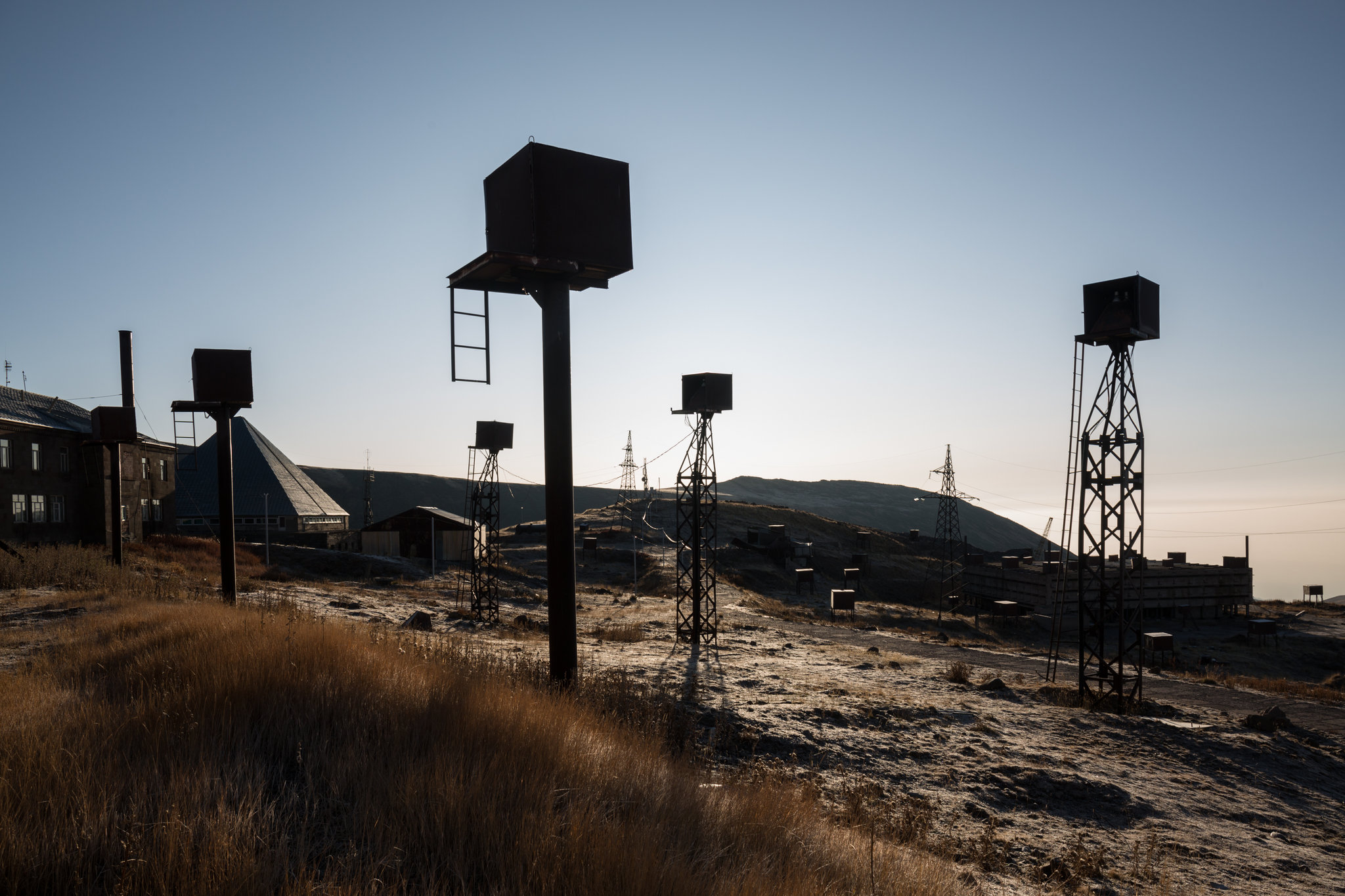 Alone on a Mountaintop, Awaiting a Very Hard Rain

The Cosmic Ray Research Station, on Mount Aragats in Armenia. In its heyday, more than 100 scientists worked there tracking high-energy particles from space.

On the windy flanks of Mount Aragats, a biblical-sounding massif in Armenia, an old man — a cook — shuffles through a sprawling array of oddly shaped, empty buildings.

The place is a symbol of what Yulia Grigoryants, an Armenian photographer, calls Cosmic Solitude. Once upon a time, it was one of the bustling centers of physics, devoted to the study of cosmic rays: high-energy particles thrown from exploding stars, black holes and other astrophysical calamities thousands or millions of light-years away and whistling down from space.

Twentieth-century physics grew into a mathematical labyrinth as one weird subatomic particle after another was discovered and theory tried to keep up with experiment. Then physicists learned how to create these particles themselves, in giant particle accelerators like the Large Hadron Collider at CERN. Mountaintop aeries like the Aragats Cosmic Ray Research Station receded in the quest for ultimate knowledge.

But the universe is still the biggest and cheapest particle accelerator of them all. And so the buildings and the instruments at Aragats remain, like ghost ships in the cosmic rain, maintained for long stretches of time by a skeleton crew of two technicians and a cook. They still wait for news that could change the universe: a quantum bullet more powerful than humans can produce, or weirder than their tentative laws can explain; trouble blowing in from the sun.

As a young woman in Yerevan, the nearby capital of Armenia, Ms. Grigoryants often hiked up Mount Aragats, using these strange buildings as mileage posts. “Each time I looked at these lonely buildings and landscapes, walking away, hiking up the mountain, often having a look back, I was left with a feeling of isolation and loneliness,” she explained in an email about her work.

She now lives in Paris, but finds herself drawn back to the mountain: “And so from time to time I return to Armenia to find out, to visit these lonely buildings that remind me so much of myself — isolated, perhaps mysterious, and wondering about an unsure future that is, as with all of us, mostly out of control.”

The Aragats Cosmic Ray Research Station, a branch of the A.I. Alikhanyan National Science Laboratory in Yerevan, was established in 1943, when Armenia was part of the Soviet Union. In its heyday, more than 100 scientists worked there keeping track of the hard rain from space. When a high-speed particle from somewhere out there — an exploding star, perhaps — reaches Earth’s upper atmosphere, it inevitably hits a particle in the nucleus of an atom high and demolishes it. The fragments from the collision shower down, crashing into other particles and creating a rain of secondary particles. Detectors on the mountainside catch these pennies from heaven, and computers analyze them and deduce the nature of the original particle.

During the 1990s, Aragats detectors recorded particles hundreds of times more energetic than those produced in the CERN collider, providing crucial evidence in support of the notion that such high-energy cosmic rays were produced in supernova explosions.

The collapse of the Soviet Union in 1991 and the rise of technology put a crimp in much of the Armenian economy, including an effort to build what would have been the world’s largest experiment to detect very-high-energy cosmic rays.

“After collapse, we finished smaller detectors,” said Ashot Chilingaryan, director of the A.I. Alikhanyan National Science Laboratory and head of its Cosmic Ray Division, which runs the Aragats station.

Now sometimes only three people work there, keeping steady watch on machines that watch the universe. “These spaces are the symbolic and visual aftermath of economic and political conflict and transition,” Ms. Grigoryants wrote. “An aftermath that is largely invisible and disregarded by the outside world, but which exists as living proof of a bygone era.”

But, surprisingly, science has survived and thrived there. In recent years the station’s work has focused on solar physics and the high-speed protons thrown from the surface of the sun — space weather, in short. The lab has also investigated radiation that hits Earth’s surface from thunderstorms. As a result the lab, despite losing most of its funds and work force, has increased its production of publications and conference reports tenfold in the past two decades, Dr. Chilingaryan said. His scientists delivered five papers at a recent geophysics meeting in San Francisco.

But it hasn’t been easy. The station sits at an altitude of nearly 11,000 feet. There is snow on the ground eight months of the year, trapping the workers on the mountain for weeks at a stretch. They spend their time checking the sensors that are scattered around the mountainside, and monitoring the electronics and computers that tie everything together and send data down to Yerevan and around the world. Once a month a snowcat delivers food and other supplies.

Cooks are the underappreciated heroes of science, feeding omelets to astronomers at midnight and loading the data analysts with carbs. On Mount Aragats, that hero is Artash Petrosyan, 70, who has been cooking at the station for 32 years. Once, he served a crew of 100; now he often cooks for himself and two young technicians. The youngsters take turns manning the station 24-hours a day, every day of the year, year after year, Ms. Grigoryants notes, “wondering if one day they might find themselves like the old man who spent half his life here.”

Dennis Overbye joined The Times in 1998, and has been a reporter since 2001. He has written two books: “Lonely Hearts of the Cosmos: The Story of the Scientific Search for the Secret of the Universe” and “Einstein in Love: A Scientific Romance.” @overbye

A version of this article appears in print on Jan. 21, 2020, Section D, Page 2of the New York edition with the headline: A Lonely Virgil in America: Atop Mount Aragats, Awaiting Cosmic Revelations.

Cover Photo: The Cosmic Ray Research Station, on Mount Aragats in Armenia. In its heyday, more than 100 scientists worked there tracking high-energy particles from space.