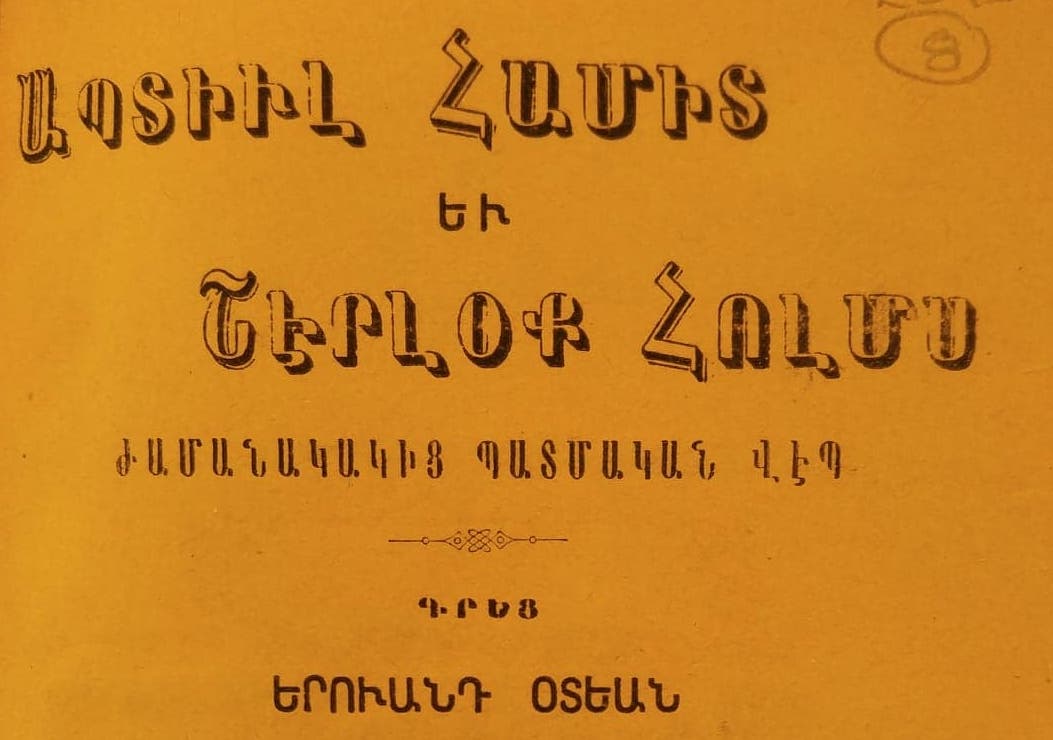 I’ve been using the Toronto Reference Library for years, but only recently stumbled upon its “Sherlock Holmes” room, a museum-like reading room, beautifully decorated with the famous detective’s paraphenalia. It houses the library’s Arthur Conan Doyle collection.  In it I found yet another hidden gem: Yervant Odyan’s novel “Abdulhamid yev Sherlock Holmes” written in Armenian and published in 1911 in Istanbul! Because of its rarety, the book can’t be borrowed, so I had to read the 300 some pages, in this room, under strict conditions like no pen, no food or drink, not to put your bag on the table etc…  I did so over several weeks as I found time, sometimes enjoying, sometimes dreading the many, many yellow pages. 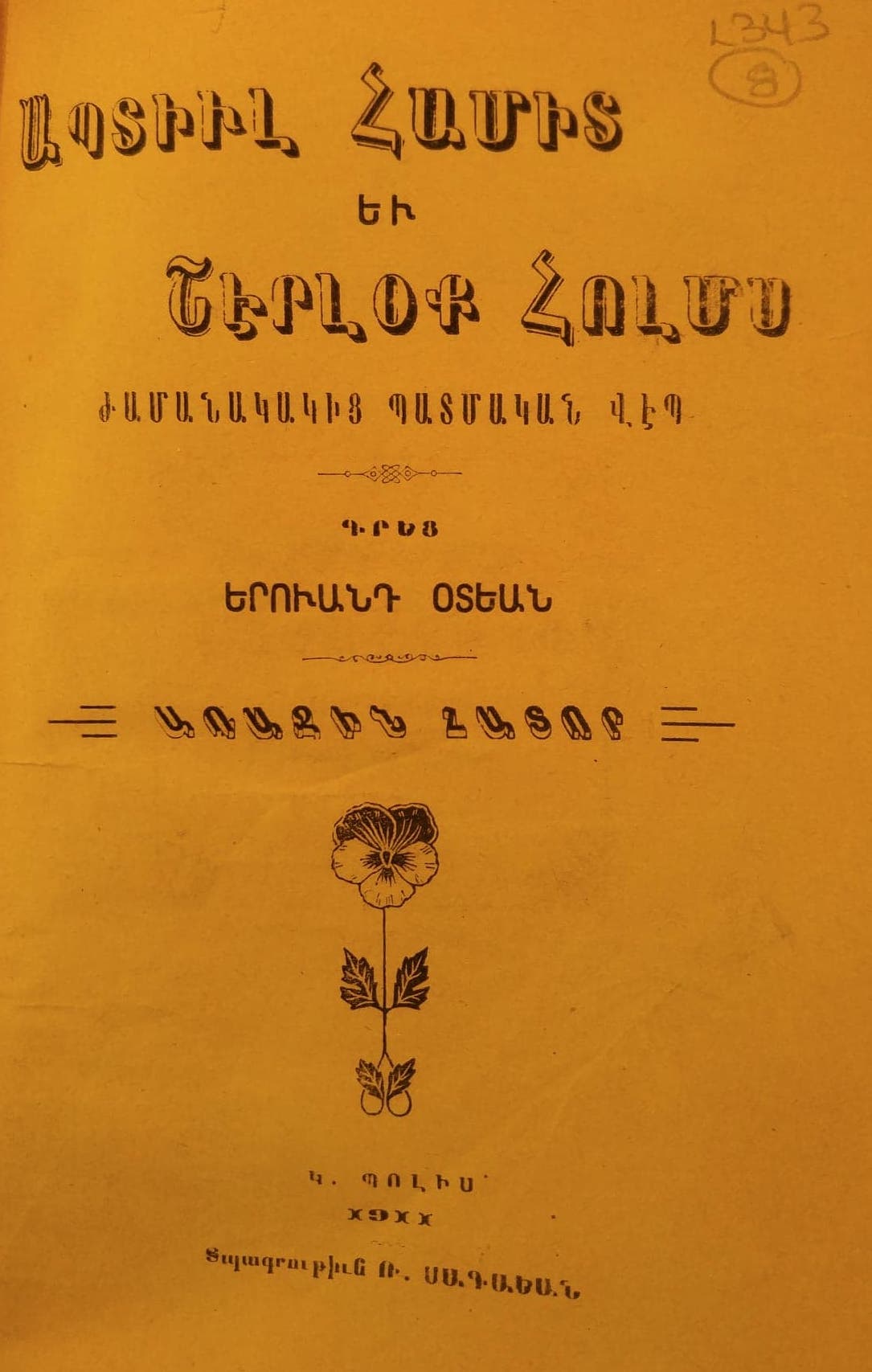 Was it worth it? It started as a very interesting and creative detective novel, but half-way through, the detective ‘Sherlock Holmes’ went back home to England and exited the book! This was very disappointing.    This happened to two other characters also, who dropped out of the story just when I started to get to know them.  After Sherlock Holmes disappeared, the book changed genre and became historical fiction, and political exposition, even propaganda for the Ittihadists who brought about a constitutional regime change in 1908. Besides its great value as a historical document, the detective story part of the book is enjoyable. However, I found the parts talking at length about  the historical period of Sultan Abdulhamid II tedious and repetitive. 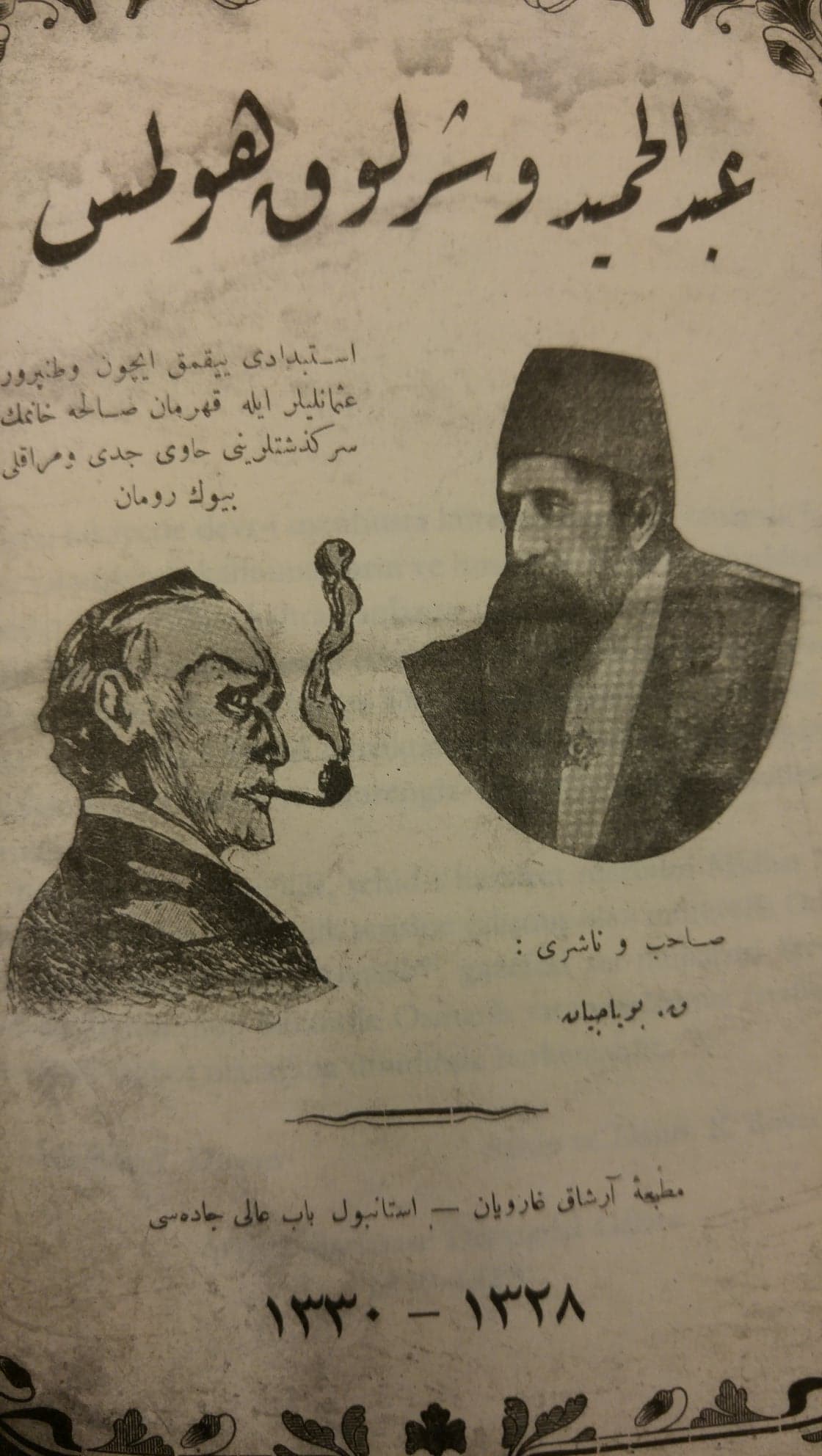 To summarize the detective story, a series of murders takes place in Istanbul, the victims are Sultan Abdulhamid’s spies and informants. The sultan finds out from Arthur Conan Doyle that his character “Sherlock Holmes” is based on a retired Scottish secret police named McLain. For a large sum of money he brings him to his Yildiz Palace to solve the murders.   McLain, very attantive to detail, immediately notices that his room in Yildiz Palace, is situated right across the hill of Çamlıca.   After many adventures, he unearths the perpetrators, who belong to a secret organization, in underground bunkers on the hill of Çamlıca.  However, after McLain realizes that the murderers are freedom fighters working to topple the despotic Sultan Abdulhamid II, he experiences a moral dilemma, between his work ethic and his sympathy for the revolutionaries as a citizen of a “freedom loving nation.” In the end, he persuades the sultan to exile them to Yemen, rather than hang them.  While they were sailing through the Suez Canal, he helps them escape! Revolutionaries secretly go back to Istanbul, while ‘Sherlock’ goes back to England.

Up to here the story is fairly exciting and suspenseful.   Odyan’s new ‘Sherlock Holmes’ is a vivid character, whom we meet at the Sirkeci train station, carrying with him only a small bag. He likes his whisky, is intelligent, brave and a master of disguise.   The settings of the story are attractive, and makes you feel like you are in Istanbul in the early 1900s, paddling on the Bosphorus, taking the steam boat from Besiktas to Uskudar, climbing the hill of Camlica or dining in Tokatliyan.  The clever disguises of Sherlock Holmes and other characters are fun.   On the other hand, the political context, which is the oppressive reign of Sultan Abdulhamid II, although informative at first, is extremely long and excessive.  It detracts from the mystery novel.  Sultan Abdulhamid’s fictionalized character is one-dimensional and monotonous, his only traits being cruelty and suspiciousness. His opponents, the Turkish/Ottoman revolutionaries, whose leader is a woman named Saliha Hanim, are also monotonous characters, always brave and self-sacrificing.

These ‘revolutionaries’ in real life had already toppled Abdulhamid and were in power when Odyan wrote this book. Of course, they couldn’t have read the book, as it was in Armenian, but actually Odyan wrote this same book also in Turkish, and also in 1911!  The Toronto library has the 2014 Turkish edition of it, transcribed from Ottoman to Latin characters and republished by Everest Publishing. Its introduction reads that it was written in 1911 in Ottoman Turkish, and was found in Erol Üyepazarcı’s archive. According to Üyepazarcı, Odyan wrote this book in Turkish, indeed an image of the original Ottoman book cover is included. The Armenian edition is not mentioned in Everest’s introduction.

Despite its shortcomings, Yervant Odyan’s “Abdulhamid yev/ve Sherlock Holmes” is a pioneer of mystery genre in Turkey.  I would have preferred not to see so much politics in a crime novel and would have liked it end when Sherlock Holmes went home, thus keeping it a purely detective novel. Nevertheless, it is a valuable rare book, that I am fortunate to have found in the inspiring “Sherlock Holmes” room of the Toronto library. 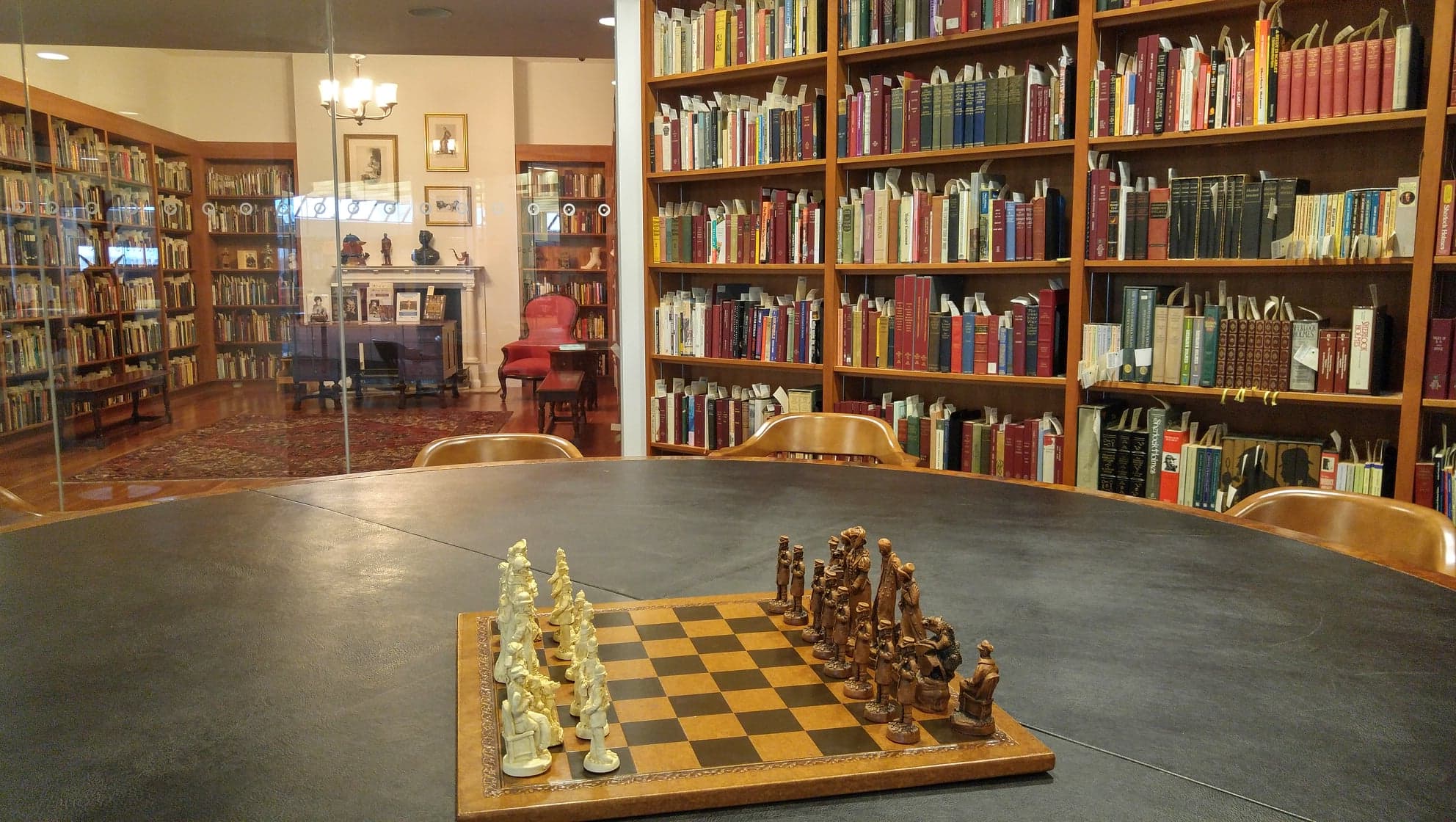 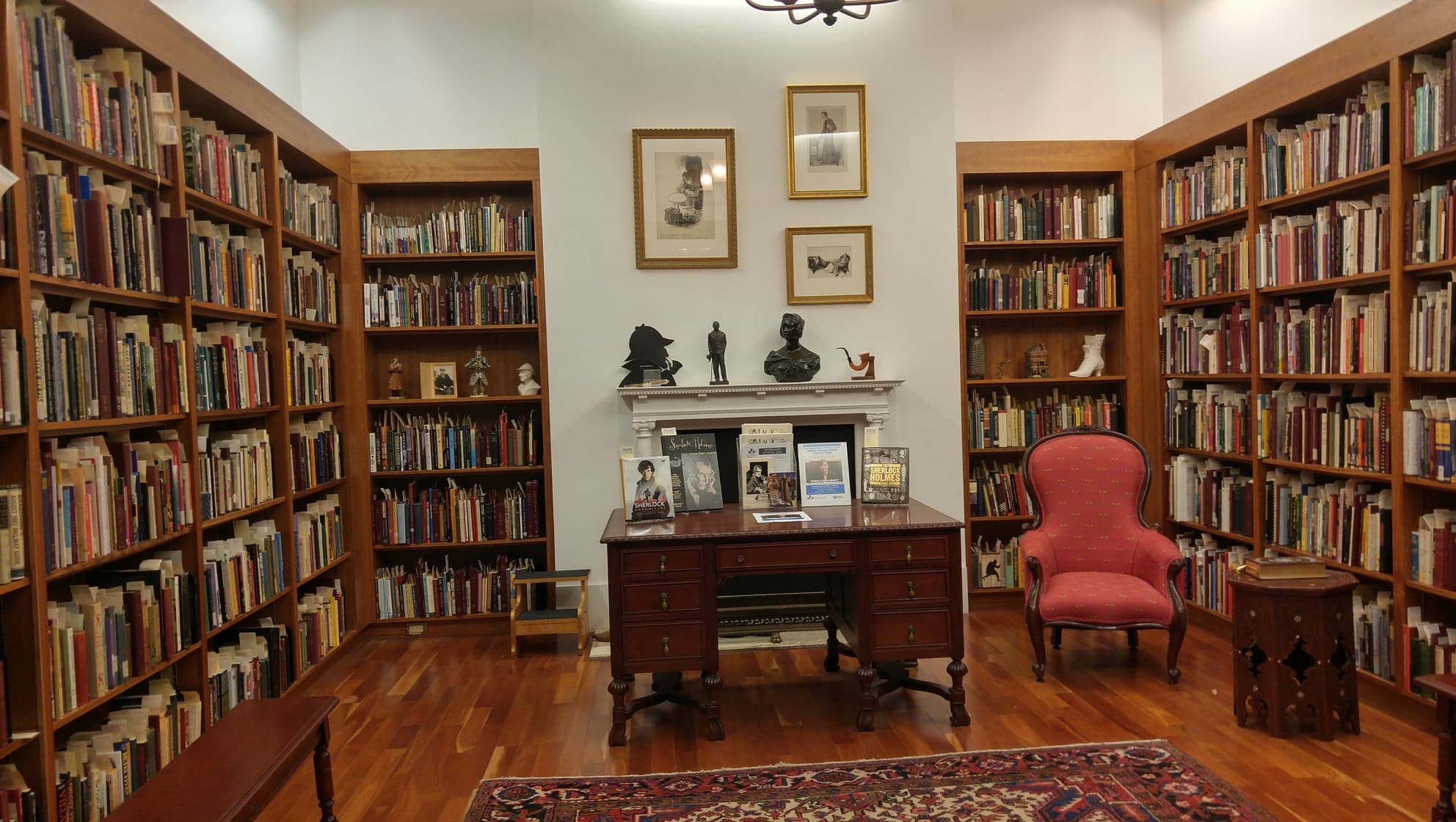