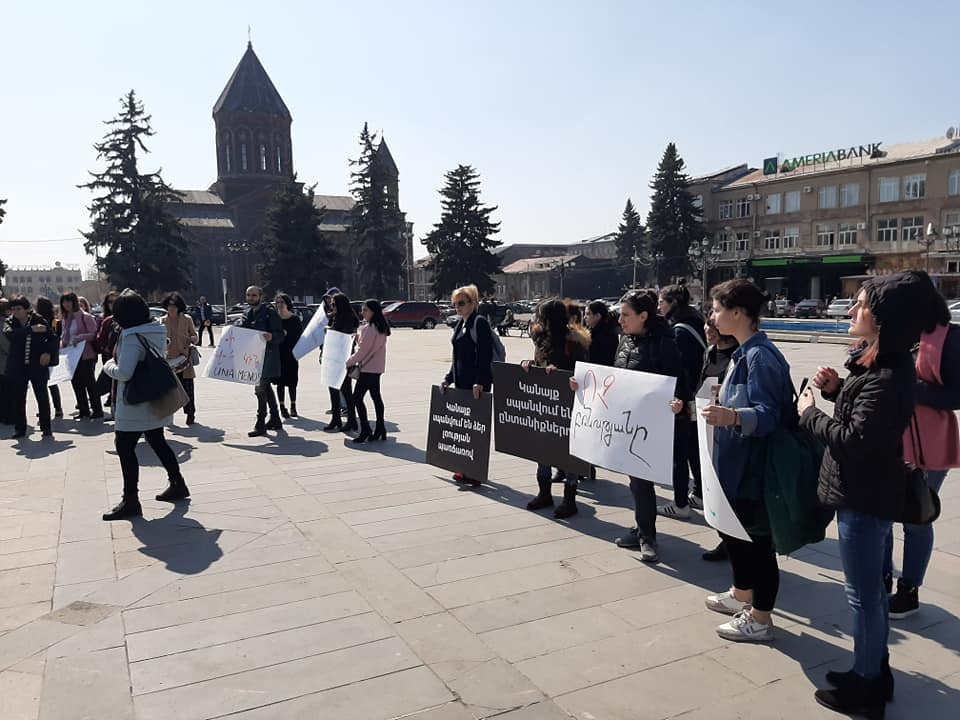 As Armenia celebrated International Women’s Day on March 8, 13 year-old Nazeli lay in a hospital bed in Yerevan fighting for dear life, after being severely beaten by her mother’s partner. Her mother was less fortunate, having succumbed to her injuries eight hours after being beaten by the same man—eight long hours during which both victims lay in their own blood in a house in Gyumri. A phone call to the police was placed only after the realization that the 43-year old woman had passed away.
The culprit? A 28-year-old man who has been charged with manslaughter and inflicting severe harm. The accused faces up to 10 years in prison.
Nazeli and her mother are the latest victims of the heinous crime of domestic violence; equally disturbing, however, is the way domestic violence is handled in Armenia. The country’s law on “Preventing violence in the family, protecting the victims of violence in the family, and restoring harmony in the family” adopted in December 2018 did not actually criminalize domestic violence.
Its very adoption was subject to much heated debate both among legislators and the society-at-large about what was considered government interference in “family affairs” and “threats to Armenian culture and values.” Eventually, terms such as “restoring family harmony” and protecting the “traditional Armenian family” were enshrined in the law to appease critics.
The protections the law does offer people who have been subject to domestic violence include fines for the perpetrator and, depending on the severity of the situation, protection orders for various lengths of time – with the longest being a six-month ban on communication with the victim, with two possible three-month extensions.
Despite its inherent weaknesses, the passing of the law was, at the time, considered an important milestone in the fight against domestic violence in Armenia. One of the important changes it brought was mandatory training for police, prosecutors, judges and others in the criminal justice system on how to respond to complaints, investigate and prosecute cases.
Nevertheless, the Gyumri tragedy of this past week, the fourth femicide so far this year, has now reignited debate about the effectiveness of the law, as well as the overall prevention and protection mechanisms available in Armenia today.
The law is, no doubt, an important weapon in the fight against domestic violence and should be urgently reformed. Alongside legal reform, a major cultural shift is essential to effectively address domestic violence in Armenia today.
Indeed, domestic violence is such a taboo in Armenian society, many will deny it even exists. Others will question how prevalent it is – with only four women murdered, is it really such a big deal? Some will justify it, and many will say it’s an “internal family affair” that doesn’t warrant external intervention.
But the fact remains that domestic violence is a big deal everywhere in the world, and Armenia is no different. And just to confirm how big a deal it is: according to official figures, 378 cases of domestic violence were investigated by the Republic of Armenia police in the first 10 months of 2019.
So yes, alongside the preventive and protective hand of the law, we need to talk about domestic violence, to call it out as the despicable act that it is, to educate people about it. When a neighbor hears the calls for help from next door, they should feel compelled to act; when family members witness the abuse, they should feel it is their duty to help; when victims suffer, they should understand it is wrong and feel empowered to claim their rights.
“Many of us are hurting for this girl and her murdered mother. But let us accept that this girl and her mother are also victims of the mentality that violence in general, and violence against women in particular, can be justified,” wrote Prime Minister Nikol Pashinyan when he visited Nazeli in the hospital on March 8.
It was an unprecedented step for an Armenian leader to visit a domestic violence victim. Now, Pashinyan’s administration must walk the walk by undertaking appropriate legal reform and implementing policies that raise awareness of domestic violence.
Houry Mayissian