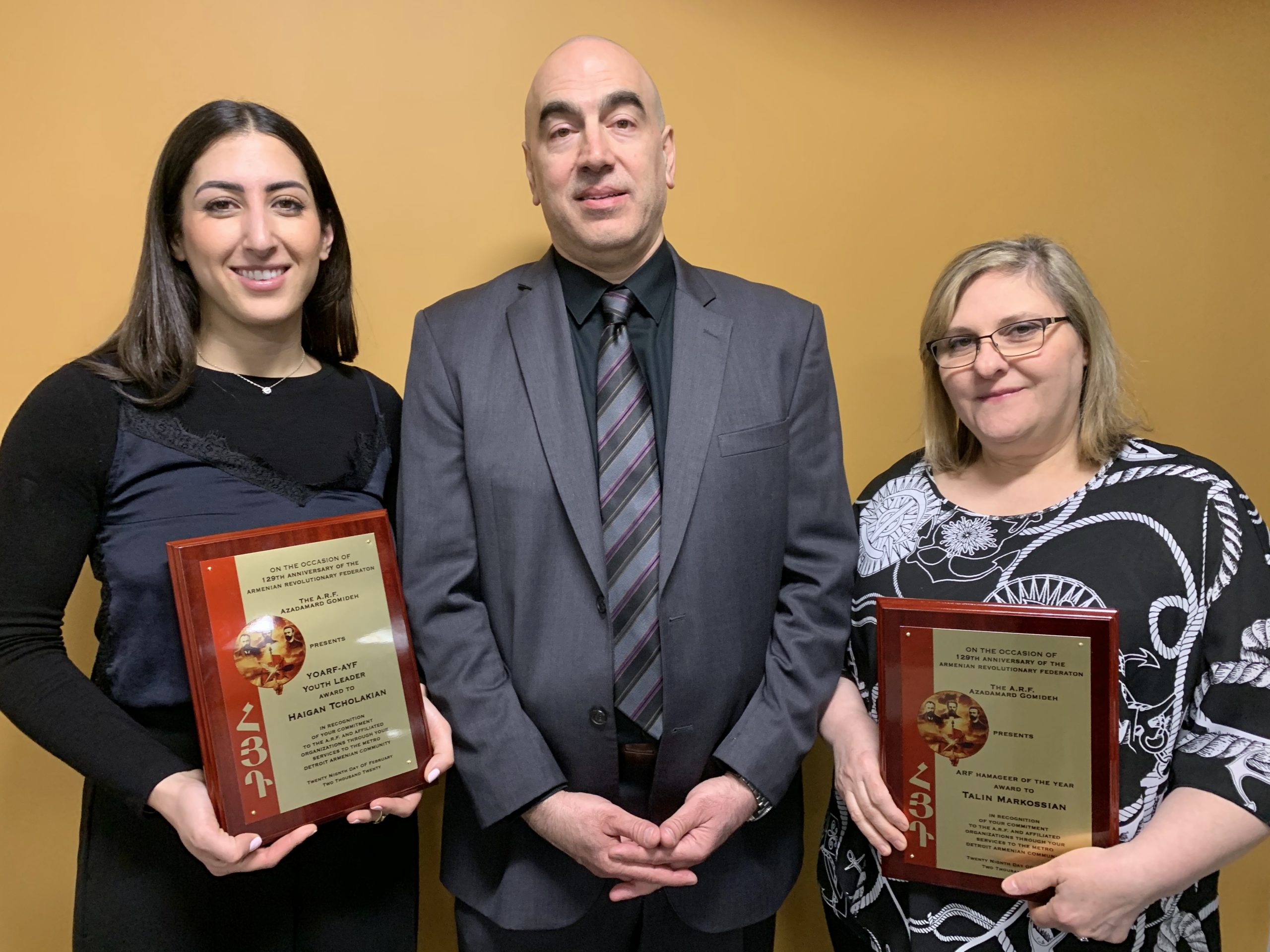 This slideshow requires JavaScript.
DEARBORN, Mich.—The Detroit Armenian Revolutionary Federation (ARF) Azadamard Gomideh chose the party’s 129th anniversary celebration to unveil and dedicate the Armenian Community Center’s new gymnasium on Feb. 29. The space served as a symbol of the venerable organization’s abiding dedication to support and invest in the Armenian Diaspora – in this case, metro Detroit’s Armenian-American community.
“In celebration of 129 years of the ARF and our commitment to the community, commitment to our affiliated organizations and commitment to our national identity, there would be no better place to celebrate this day than in our getron (center) and in this new expansion,” said Azadamard Gomideh Chair Raffi Ourlian in his welcoming remarks.
As Armenian Youth Federation (AYF) “Kopernik Tandourjian” Chapter President Talar Bagdasarian and Detroit Homenetmen (HMEM) Scoutmaster Ara Margosian held the red dedication ribbon for the traditional cutting, those who had been involved in the work that led to the celebratory moment gathered to watch, along with the gymnasium architect and construction team of Gus Pappas, Evans Caruso, Joe Furtado and Bernie Ronnish.
Prayers were offered by St. Sarkis Armenian Apostolic Church Rev. Hrant Markarian and St. Vartan Armenian Catholic Church Rev. Andon Atamian, who congratulated the ARF and the community on the milestone moment.
Agop Demirjian and Hayg Oshagan were also recognized for their work co-chairing the Armenian Community Center’s committee to oversee the gym project and the larger project of building a new Armenian Community Center in Novi, Mich., which will establish a home for the community that has already migrated to metro Detroit’s northwest suburbs.
“As ARF members, this gymnasium project brought us closer and made us stronger and tougher,” said Ourlian. “And it prepared us for what is coming next for the Armenian community. Together, we’re going to do it. The best part of completing this gym is that we’re freed up now to focus on one project in Novi.”
Master of Ceremonies Shant Jamgotchian rallied the crowd to rise to its feet for the HMEM Scouts’ presentation of the flags, the singing of the American and Armenian national anthems, and a moment of silence for all ARF members who had dedicated their lives for the Armenian people and Armenian nation.
“It’s not every day we have a moment like this,” Jamgotchian said. “Long live free, united and independent Armenia and always with respect for our martyrs and our holy cause.”
This slideshow requires JavaScript.
ARF Eastern Region United States Chair George Aghjayan was the guest speaker with a message of ARF pride and humility.
“The ARF is being heavily criticized today,” Aghjayan said. “Some of it is justified. If you are in the game, you will make mistakes. Criticism is confirmation of our continued relevance today. However, you do not last 130 years without doing some things right.
“If you look back at the political landscape that existed at the time of the formation of the ARF and see what is happening today, the ARF remains while others have fallen away or been severely diminished. We accept legitimate criticism and strive to be better so as to deserve the trust of the Armenian people.”
But Aghjayan cautioned the crowd to be wary of critics who disparage the party with negative ulterior motives.
“Some criticism has a much more sinister motivation – to divide us, to separate us from our successes so as not to credit the ARF, to attempt to put an end to the ARF itself. And our successes have been many,” he noted, listing the party’s important contributions to the Armenian diaspora and now, Armenia herself.
“Look at our participation in the liberation movement, both at our inception as well as during the Artsakh war, meting out some measure of justice against those responsible for the Armenian Genocide; the Armenian Youth Federation, formed with the intent to retain our youth and fight assimilation. Generation after generation, the AYF has supplied the core members of our community, serving not only our organizational family, but also outside our traditional sphere.
“The Hairenik newspaper is the oldest, continuously operated Armenian language newspaper in the world. The value of the Hai Tahd work of the Armenian National Committee and our political influence within the United States cannot be denied. We are the largest and most influential grassroots Armenian advocacy organization in the United States.
“We created the Armenian Relief Society which now has extensive humanitarian projects within the United States and around the world, as well as the Hamazkayin Cultural and Educational Society which hopefully will soon be expanding into genealogy projects, and the HMEM Scouts.
“And let us not forget that the Prelacy and churches could not have been founded without the support and backing of the ARF in this region. This is not gloating, but on this anniversary of the ARF, as people attempt to minimize or revise the positive contributions the ARF has made and continues to make to our community and nation, we are obligated to respond and remind.”
The ARF Azadamard Gomideh’s ARF anniversary celebration traditionally recognizes an AYF member and ARF supporter for their service to the community. This year’s AYF-YOARF Youth Award went to Haigan Tcholakian, while Taline Margosian was recognized with the ARF Hamagir Award.
Deceased ARF members Dajad Godoshian and Apkar Fermanian were remembered with the Gomideh’s Legacy Awards, as family members of those departed ungers accepted a plaque in their memory and honor.
This slideshow requires JavaScript.
The remainder of the evening was devoted to the singing of Sevak Amroyan of Armenia, whose rendition of national and patriotic songs moved a crowd of young ARF, AYF and HMEM members to the front of the stage to link arms, sing along and move all who watched to rededicate themselves to the Armenian Cause.
Georgi-Ann Bargamian Oshagan