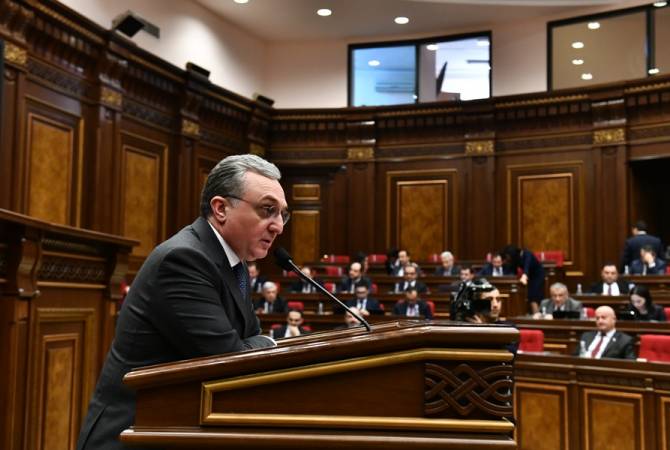 YEREVAN, MARCH 4, ARMENPRESS. Foreign Minister of Armenia Zohrab Mnatsakanyan assures that the meeting of the OSCE Minsk Group Co-chairs in the foreign ministry of Turkey was part of the routine and Armenia has no concerns over this fact. Turkey can have no role in the Nagorno Karabakh peace process, ARMENPRESS reports Zohrab Mnatsakanyan said during parliament-Cabinet Q&A session.

Zohrab Mnatsakanyan said that the OSCE Minsk Group Co-chairs have their working routine which includes also meetings with representatives of the OSCE member states and the Minsk Group in case of necessity. He emphasized that such meetings are not something new and there is nothing bizarre there.

”This is not the 1st meeting. They met with a number of other countries before and other meetings are scheduled. This is normal and we have no concerns regarding the Minsk Group Co-chairs. Maybe the difference is that Turkey made some comments. By the way, to be honest, the comments did not include anything that we had never heard in the past. And we made an announcement about this. Everybody knows that approach, which is Turkey with its unfriendly policy towards Armenia and the Armenian people, which in Nagorno Karabakh conflict is reflected also by the one-sided military assistance to Azerbaijan, can have no direct role in Nagorno Karabakh conflict settlement process”, FM Mnatsakanyan said.