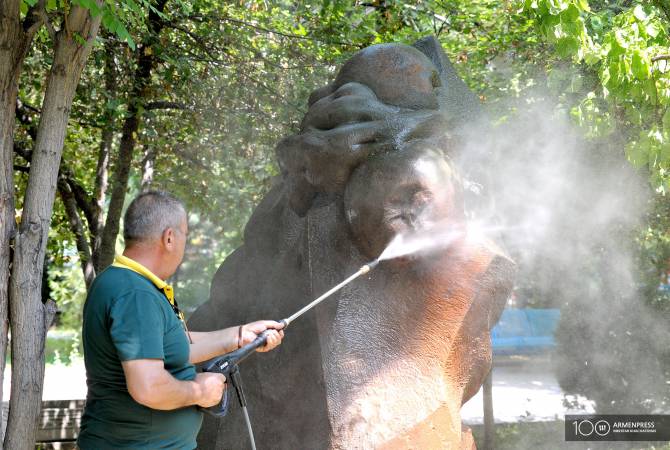 YEREVAN, JUNE 27, ARMENPRESS. A philanthropist has taken matters into his own hands to revive the statues “covered in dust” at the Yerevan Children’s Railway.

Ara Tovmasyan, an Armenian-American, has been living in the United States for more than 30 years.

In 2017, he returned to Armenia and saw what he described to be a sad Yerevan, which “has lost its pink features”.

Determined to convey new colors and blink, he and his assistant Arman brought a pressure washer to the park to clean the sadness off the statues – and all of this free-of-charge.

“On one occasion I brought my brother’s grandchildren to the Yerevan Children’s Railway. Regretably, here it was sad too, the statues were dusty, they didn’t interest the kids. I decided to organize this campaign and wash all statues of the park – certainly by informing the park’s administration,” Tovmasyan said.

He says they use a special pressure washer designed for statues.

“If this campaign gets encourages we might as well wash other statues in other parks as well. I really want the city to have a pinkish image. After last year’s revolution the face expressions of people got brighter, and why shouldn’t the city get brighter too”?

“They say America is a land of opportunities, but I am also urging my son to return to Armenia because Armenia too has become a country of opportunity. We must invest in our country and enrich it,” he said.

Despite the summer heat, the duo started washing the statues – and the result was astonishing.