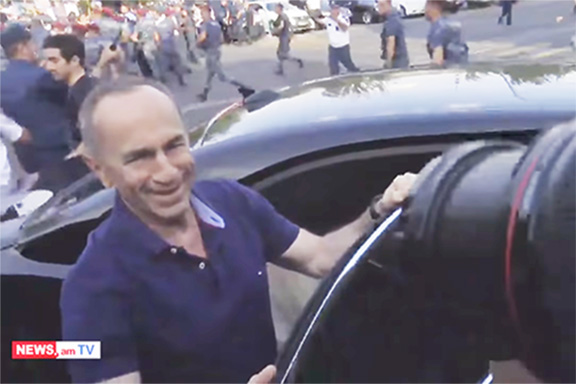 Former president Robert Kocharian was remanded into custody again on Tuesday after Armenia’s Court of Appeals reversed an earlier decision by a lower court to vacate his pre-trial detention order on appeals from prosecutors.

Presiding judge Armen Danielyan reversed a May 18 decision to free Kocharian, who along with two retired generals, is charged with breaching Armenia’s constitutional order in connection with the March 1, 2008 post-election street protests during which eight civilians and two police officers were killed in clashes with security forces.

On Tuesday, Kocharian arrived in a limousine at the Yerevan-Kentron detention center located in the National Security Service building on his own volition. Kocharian greeted supporters at the entrance of the building and taunted reporters.

“Are you waiting for me to say something?” Kocharian asked reporters who approached him outside the detention center. “I think you can see that there is neither law nor rule of law.”

The prosecutors appealed the May 18 decision to free Kocharian with personal and written guarantees provided by the current and former presidents of Artsakh, Bako Sahakian and Arkady Ghoukassian, who appeared in court in a Yerevan court in mid-May to offer their support. The court also decided on May 18 to appeal to Armenia’s Constitutional Court to determine whether the charges against Kocharian were in line with Armenia’s constitution. Armenia’s Prosecutor General Artur Davityan personally appeared in court last week to make the case for Kocharian’s re-arrest. Families of the March 1, 2008 victims also filed their own appeal to the court.

Tuesday’s ruling by Judge Danielyan effectively invalidated the guarantees by Sahakian and Ghoukassian and also threw out the appeal to the Constitutional Court.

Last week, Judge Danielyan abruptly ended a hearing and walked into his chambers declaring that he would make a ruling based on evidence that had already been presented. This angered Kocharian’s attorneys, who on Tuesday contended that the defense was not allowed to present its case as a result of Danielyan’s sudden end to the court proceedings.

Since his first arrest last July, Kocharian has insisted on his innocence saying that this is a political vendetta by the current regime. He also blames Prime Minister Nikol Pashinyan for his role during the March 1, 2008 standoff. Pashinyan was leading the post-election protests organized by Armenia’s first president Levon Ter-Petrossian, who was challenging the results of the presidential elections that saw Serzh Sarkissian assume the country’s leadership.

Pashinyan has denied any political motive in prosecuting Kocharian and the others in the March 1, 2008 case, despite the fact that during protests that brought him to power last spring, he continuously vowed to bring the so-called perpetrators of the March 1, 2008 events to justice.