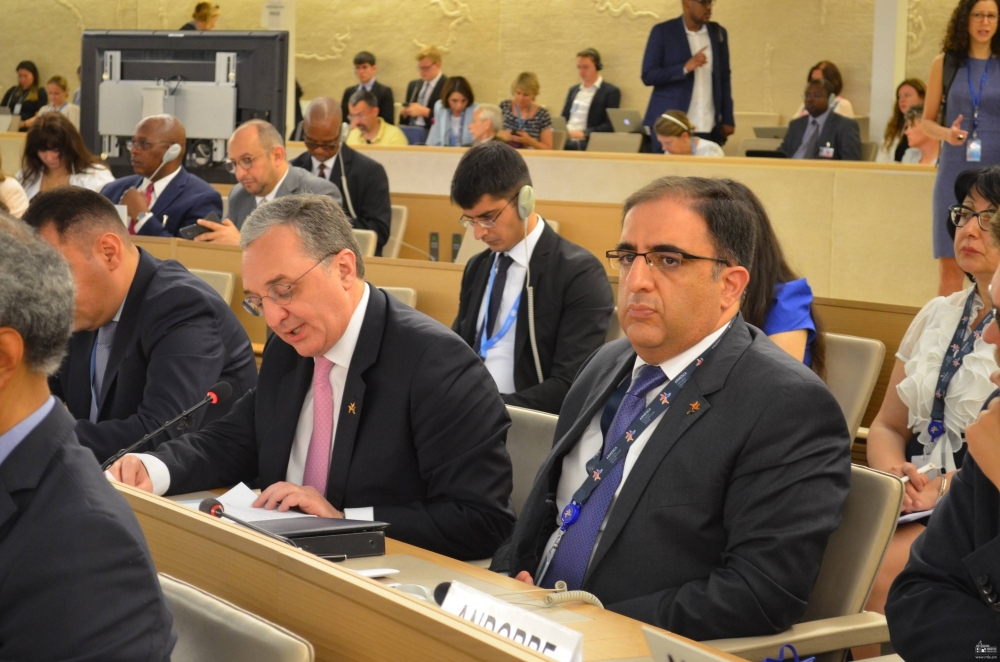 Armenia strongly condemns the denialist policies and the offence to the dignity and memory of the victims of the Armenian Genocide manifested in the address by the President of Turkey on 24 April 2019, Armenian Foreign Minister Zohrab Mnatsakanyan said in an address to the 41st session of the UN Human Rights Council in Geneva.

The reference in the address to the victims of the Genocide as “Armenian gangs and their supporters” is insulting and deplorable, he added.

He said “the justification of the Armenian Genocide, planned and perpetrated by the Ottoman government as “relocation” and further qualifying it as “the most reasonable act” attests to the intent to destroy in whole or in part the Armenian population of the Ottoman Turkey, a national, ethnical and religious group as defined by the Convention on the Prevention and Punishment of the Crime of Genocide. ”

Below are excerpts from the Foreign Minister’s speech:

One year ago the people of Armenia demonstrated their strong commitment and determination to defend and secure the powers, ideals and values of a democratic society. Later in December 2018 the people of Armenia returned to the polling stations to elect in a genuinely democratic process the new Parliament of Armenia – a process, supported by the international community, but most importantly, entrenched in strong political will of our Government to secure genuinely free and fair elections, the results of which were trusted and accepted by our public and all political forces. This is an opportunity to reaffirm the appreciation to our international partners and organisations, including the United Nations, for promptly responding to our request for the technical support in organising the democratic conduct of the elections.

Today our Government is empowered with the very strong mandate of our people, which entails confidence, as much as overwhelming responsibility to deliver on the consolidation of democracy, the rule of law, human rights and sustainable development in Armenia.

Over this year our Government has been steadfast in delivering on its programme priorities, of which the reform of the judiciary has become the most predominant and pressing one. A genuinely independent and impartial judiciary is attainable, its reform is driven by the strong political will of our Government, as we know that achieving this objective in the shortest possible time will complete and consolidate the purposes and the essence of Armenia’s Velvet Revolution. In pursuing this reform, we also benefit from the strong support of our partners, including the EU, and taking advantage of the valuable expertise within our regional organisation, the Council of Europe. In the context of our present meeting, this experience is a good case in point about the prudent and reasonable division of labour amongst international and regional human rights organisations.

The success of Armenia’s non-violent Velvet Revolution of love and solidarity has been secured to a considerable extent by the strong involvement and active political participation of our women. Our experience reaffirms the critical role of women in the political and social life of the society and nation, and therefore the priority of pursuing and advancing equal rights and opportunities for women and men. It is a programmatic priority for our Government. Amongst other objectives, and for the purpose of increasing political representation of women in Armenia’s public life, higher quota for women has been secured in the newly elected Parliament.

Women as agents of peace

Women are also strong agents of change for peace and security. They have a vital role in the prevention of violent conflicts, and therefore their strong and sustained engagement is of great importance. The tragic experiences in our region compel us to resolutely pursue such objective. Earlier this February our Government approved the first National Action Plan on the implementation of the UNSC Resolution 1325 on Women, Peace and Security. The adoption of the Action Plan was preceded by a broad and engaging consultative process with the active participation of government agencies, the civil society and international organizations. It is a comprehensive, coherent and coordinated document, which aims at the acceleration of the political participation and economic empowerment of women in the context of peacebuilding, conflict-prevention and conflict resolution. We know that effective implementation of Resolution 1325 at the national level consolidates a broader national objective of promoting women’s rights and equal opportunities in economic and social life.

At the international level Armenia is committed to share experience with its international partners and contribute to our collective efforts in protecting and advancing the rights of women and girls and strengthening their role in public life. We will spare no effort to advance this agenda also through our chairmanship in the United Nations Commission on the Status of Women for the 64thand 65thSessions. Globally, we will soon be celebrating the 25th Anniversary of the Beijing Declaration and Platform for Action, which represents an important opportunity for comprehensive stock taking and sincere assessment of the record of our national and international efforts in this regard.

The prevention of genocide remains considerably challenged. We witness attempts to deny and justify the crime of genocide, which undermine the fight against impunity and risk recurrence of new genocides. Armenia strongly condemns the denialist policies and the offence to the dignity and memory of the victims of the Armenian Genocide manifested in the address by the President of Turkey on 24 April 2019. The reference in the address to the victims of the Genocide as “Armenian gangs and their supporters” is insulting and deplorable.

The justification of the Armenian Genocide, planned and perpetrated by the Ottoman government as “relocation” and further qualifying it as “the most reasonable act” attests to the intent to destroy in whole or in part the Armenian population of the Ottoman Turkey, a national, ethnical and religious group as defined by the Convention on the Prevention and Punishment of the Crime of Genocide. The leadership of Turkey continues to blatantly defy the international public opinion and historical reality.

This Council and its special procedures should sustain strong leadership in promoting and strengthening the prevention of genocides at national and international levels. There needs to be sustained support to the Office of the UN Secretary General’s Special Adviser on the Prevention of Genocide. Further action should be taken to reinforce capacities for early warning and early action mechanisms for situations, which may lead to genocide. Resolute action is required to combat hate speech, xenophobia and intolerance. We welcome and support the UN Strategy and Plan of Action on Hate Speech recently launched by the UN Secretary General. Armenia remains a committed and strong contributer to the international efforts for the prevention of genocides.
Mr. President,

Human rights are universal, they apply to all on an equal footing, without any discrimination. These principles are at the heart of the Universal Declaration of Human Rights and of the UN Charter. These constitutional documents stipulate in clearest terms that to respect, protect and promote human rights and fundamental freedoms for all, there can be no distinction of any kind, including “the political, jurisdictional or international status of the country or territory to which a person belongs, whether it be independent, trust, non-self-governing or under any other limitation of sovereignty”.

Therefore, limitations imposed on people living in conflict areas to benefit from access to international mechanisms for human rights contradicts the spirit and the letter of international human rights law. It is coercion. It is a violation of human rights in itself, which exacerbates conflicts and undermines peaceful resolution efforts.

Nagorno Karabakh is people. It is 150 thousand individual human beings with dignity, responsibility and rights. Like any other people, they are entitled to freely enjoy their inalienable rights – all of them, including the right to self-determination, the right to freely determine their political status and freely pursue their economic, social and cultural development.

In their condition, the right to life is especially endangered, as the existential physical security of the people of Nagorno-Karabakh remains the biggest sustained threat. The atrocious assault on their human security in the early 1990s, the repeated aggression against Nagorno-Karabakh in April 2016, continued glorification of cold-blooded murderers for killing Armenians, accompanied with government sponsored anti-Armenian propaganda and xenophobia represent the core causes of the conflict.

The key to resolution and lasting peace in the region is the recognition of the human security and rights of the people of Nagorno Karabakh.

Nagorno-Karabakh deserves recognition of its efforts to protect and promote human rights of their people. Their voluntary undertaking to draft and submit an initial periodic report on the implementation of the provisions of the International Covenant On Civil and Political Rights is commendable. It is a detailed account of the achievements of their elected authorities in building a society, which respects and promotes human rights based on international norms and standards.

Armenia committed to the strength of UN human rights machinery

Armenia is a candidate for one of the two seats allocated to the Eastern European Group in the UN Human Rights Council for the term 2020 to 2022. Our national experience of consolidation and strengthening of the practice, the law and the institutions for the promotion and protection of human rights empowers us with confidence that we will deliver quality membership in the Council and will contribute in a genuine, fair and effective manner to international cooperation within the United Nations primary body for human rights.

Having been benefiting from such cooperation for the advance of our national human rights agenda, we recognise and strongly value the merits of dialogue, patience, consistency and commitment in promoting and protecting human rights at the international level. We have set clear and precise commitments and pledges for our membership. We are keen to learn, to listen and to share experience. We are committed to support intergovernmental cooperation, civil society engagement and consolidation of the United Nations human rights system. We are well prepared to deliver good service to cooperation within this Council.

In conclusion, Armenia reiterates its unwavering commitment to the strength and effectiveness of the United Nations human rights machinery. We commend and support the work of the High Commissioner for Human Rights and her Office, the human rights bodies and mechanisms. Despite challenges, the Council remains a critical body for international cooperation to protect human rights, human dignity and integrity.

It is worth to be reminded that the United Nations and this Council in particular continue to represent a source of hope and trust for millions around the world, that human rights is a pillar of the United Nations, of its purpose for a fair and secure world. It is an essential platform for shared responsibility.
Nagorno-Karabakh deserves recognition of its efforts to protect and promote human rights of their people, Armenian Foreign Minister Zohrab Mnatsakanyan said in an address to the 41st session of the UN Human Rights Council in Geneva.