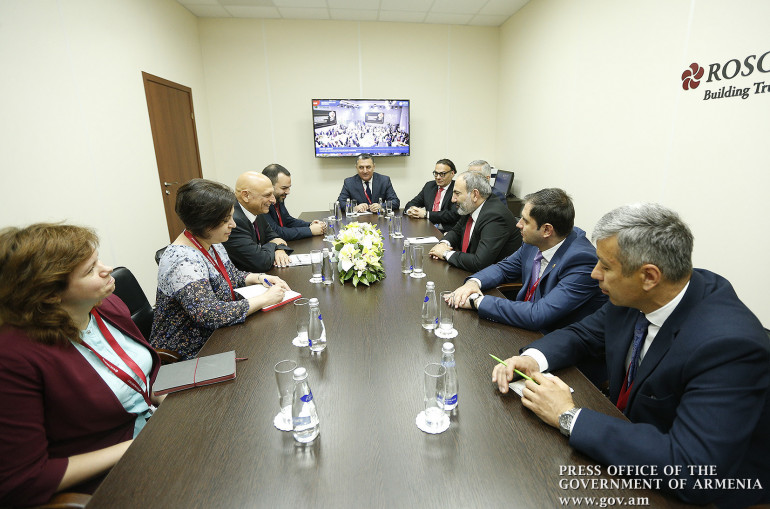 Armenian-Israeli cooperation in IT sector discussed in St Petersburg

Prime Minister Nikol Pashinyan and CEO of the Israel Innovation Authority Aharon Aharon discussed the two countries’ cooperation in the IT sector as they met in St Petersburg, Russia on the sidelines of the Armenian leader’s working visit to the country.

Highly appreciating the idea, Pashinyan emphasized the Armenian Government’s priority focus on IT industries as a ”potential locomotive in the country’s economic structure ”. He promised strong government efforts to invest the best possible resources in the sector’s development.

According to a press release by the Office of the Prime Minister, Pashinyan also elaborated on the plans to conduct the World Congress of Information Technologies (WCIT 2019) in Armenia, inviting Israeli companies to attend the key event.

Thanking the premier for the meeting and the invitation, Aharon agreed that the two countries need to step up their collaboration in the sector to use the unrealized potential through an active engagement of their private sectors and expansion of bilateral ties.

Admitting that mutual partnership may be really promising, Aharon also expressed the Israeli government’s interest in the deepening and strengthening of the dialogue.

He also promised to ensure Israeli companies’ participation in the event in Yerevan, adding that their state has kept the technologies sector under a permanent focus since 1971.

Pashinyan hailed the proposals made by the Israeli official, stressing the importance of practical steps to achieve their real implementation.