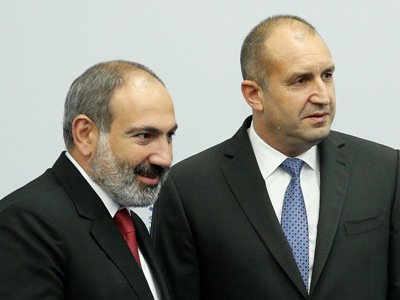 Armenia, Bulgaria to give new impetus to bilateral cooperation

Armenia’s Prime Minister Nikol Pashinyan met with President Rumen Radev of Bulgaria, on the margins of the St. Petersburg International Economic Forum in Russia. The interlocutors discussed the avenues for further development and expansion of Armenian-Bulgarian relations.

Pashinyan attached importance to high-level meetings, noted that there are traditional friendly relations between the two peoples, and said that the governments of Armenia and Bulgaria should take practical steps to give new impetus to interstate relations. Also, the head of the Armenian government pointed to the important role of Bulgaria in the South Caucasus, and stated that Armenia is interested in implementing joint programs with Bulgaria in various domains.

At the same time, Nikol Pashinyan welcomed the Bulgarian parliament’s ratification of the Comprehensive and Enhanced Partnership Agreement between Armenia and the European Union (EU), and added that Armenia attaches great importance to relations with the EU and its member states.

Radev, in turn, noted that Bulgaria closely follows the events and democratic changes taking place in Armenia. According to the Bulgarian president, the two countries have great potential for cooperation and the Bulgarian Armenian community can considerably contribute to the fulfillment of this potential. Furthermore, Romen Radev stressed the importance of Armenian-Bulgarian cooperation in several spheres, and noted that they are interested in the implementation of steps toward cooperation in the high-tech sector.

Additionally, the leaders of the two leaders touched upon cooperation in multilateral formats.