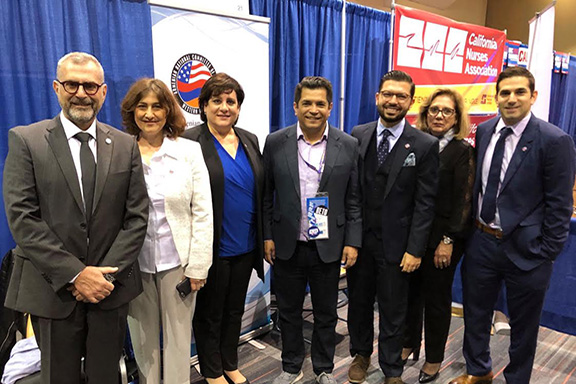 SAN FRANCISCO—A delegation from the Armenian National Committee of America – Western Region, together with the ANCA San Francisco chapter and the Southern California Armenian Democrats, participated in the 2019 California Democratic Party State Convention from May 31 to June 2, meeting elected officials and candidates throughout the Golden State to advance the public policy priorities of the Armenian-American community.

“As a nonpartisan grassroots advocacy organization, it is important for us to be present at a variety of political gatherings bringing together people of different political ideologies, to ensure our community’s collective voice is heard loud and clear by elected officials and candidates alike,” remarked ANCA Western Region Chair Nora Hovsepian, Esq. “Our Cause is not and cannot be partisan. We always have worked with Democratic, Republican, and Independent politicians and candidates to advance the Armenian Cause, and we will continue to do so not just in California, but throughout the Western Region and beyond.”

Over the course of three days, ANCA-WR delegation members met with a number of Democratic candidates for U.S. President, federal and state elected officials, as well as county and city politicians. At this year’s convention, Armenian-Americans were the only ethnic group to have an exhibit booth, thereby providing the opportunity to educate hundreds of convention attendees, delegates, politicians, and candidates on the Armenian Cause and the community’s immediate legislative priorities.

The ANCA Western Region will also be present at the upcoming California State Republican Convention.

The Armenian National Committee of America – Western Region is the largest and most influential nonpartisan Armenian American grassroots advocacy organization in the Western United States. Working in coordination with a network of offices, chapters, and supporters throughout the Western United States and affiliated organizations around the country, the ANCA-WR advances the concerns of the Armenian American community on a broad range of issues in pursuit of the Armenian Cause.