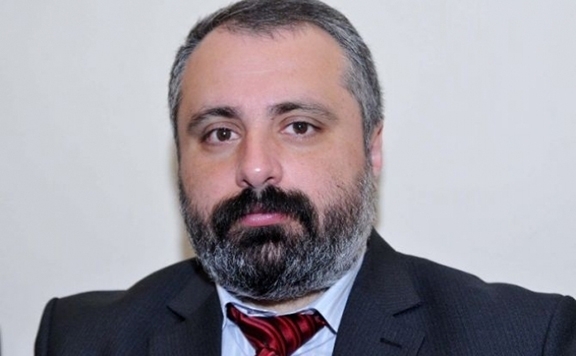 Azerbaijan maintains its “policy of hatred“ towards Armenians – David Babayan

Karen Ghazaryan
Public Radio of Armenia
One thing that has changed after the meetings between the leaders of Armenia and Azerbaijan is the decreased number of ceasefire violations, says David Babayan, Spokesperson for the Artsakh President.
“We welcome and give importance to this. However, Azerbaijan still maintains its Nazi, revanchist policy towards Armenians,” Babayan said in an interview with Public Radio of Armenia.
According to him, the unprecedented number of military exercises held in Azerbaijan this year speaks for itself.
The comments come in the wake of an exchange of statements between the Foreign Ministries of Armenia and Azerbaijan.
Over the weekend the Armenian Ministry of Foreign Affairs issued a statement, denouncing Azerbaijan’s “deliberate steps by Azerbaijan in the past three days to increase tension, which manifest in dissemination of false information about its own casualties, direct calls for physical threats to the leadership of Armenia, publicly voiced by representatives of the ruling party in Azerbaijan’s parliament, and significant increase in ceasefire violations, which resulted in the killing of an Armenian soldier.
The Azerbaijani side responded by saying that “the emotional and controversial statement” of the Armenian Foreign Ministry is “within the line of Armenian authorities’ reaction to the current domestic situation in the country.”
“This means Azerbaijan has not reviewed its approaches, and developments in the negotiation process can hardly lead to a breakthrough,” Babayan said.
Therefore, according to him, we have to be more united than ever against the growing foreign threat.
“We have to continue strengthening the country, reinforcing our borders, raising the combat readiness of the army, keeping our unity strong and maintained a balanced foreign policy. This is the guarantee of our security and peace in the country and the region,” the President’s Spokesman added.