15 Years Later: Is It Getting Any Better? 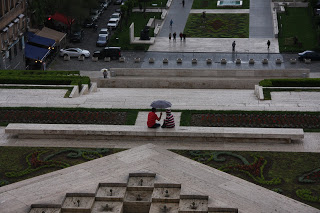 Posted by Kristi Rendahl
“Is Armenia getting any better?” I’m asked on a regular basis. Few people hide their skepticism when they ask, but I also hear a hint of desperation in the question. After watching Armenia change over the past 15 years, I’m always happy to respond with plenty of reason for hope.
After watching Armenia change over the past 15 years, I’m always happy to respond with plenty of reason for hope. (Photo by Nanore Barsoumian)
Let’s start with simply getting there. In 1998, when I crossed the Armenia-Georgia border by land, the bus was held for several hours until we each paid a $5 bribe. There was no toilet; instead, people lined up behind the border building to defecate. This summer, I paid $30 for a hassle-free marshutni ride from Tbilisi to Yerevan.
Yes, the Georgians have better conditions on the border, and yes, travelers stand under the elements for 20-30 minutes on the Armenian side. But the proof is in the harissa, to adapt an old saying. The entire journey took just over five hours and was free of resentment-inducing extortion. Armenians pride themselves on being hospitable, and the border is much closer to being a hospitable place.
The improvements of air travel in and out of Armenia are far more blatant. During the 1990’s, the airport was dreary, intimidating, smoky, dirty, corrupt, and stressful. When my parents came to visit, I hired the expeditor from the U.S. Embassy to meet them at the plane, because the process was unclear and disorienting.
Fast-forward to 2012 and you’ll find a pristine building, tidy bathrooms, orderly processes, and top-notch customer service at each step. Even my taxi driver to the airport bragged about how the new airport meets international standards. It’s an important moment when people witness their own potential for excellence.
Travel within the country is also improved. During a two-hour drive outside of Yerevan, whether on public transit or in a private car, you were guaranteed to be pulled over at least once for a bribe. Within Yerevan, too, people were constantly pulled over to pay the local authorities, who paid someone else, who paid someone else, and so on. It was an exhausting reality. While this still happens to some extent, it is not the same street-level corruption as existed before. And that matters.
The quality of life in general is markedly different. I wasn’t there during the worst years, but I was there when water was provided in my village just twice a week for two hours. There’s something romantic about collecting water in huge tubs and taking bucket baths for about a week, maybe two, but not a lifetime. These days, most people have water all the time, and many in Yerevan have hot water heaters for bathing and washing dishes.
Tourists no longer need to make Yerevan their base. They never did, of course, but there are far more reasons to leave now. It’s easy to find reasonably priced transit and there are quality inns and hotels around the country. This summer I couldn’t wait to spend my weekends in Dilijan and Goris, soaking up the mountain air I had been craving.
There has been a remarkable shift in customer service overall. For the foreigner, negotiating the price of a taxi ride before sitting was advisable, lest you end up over-charged at your destination. Now, you can simply look at the meter to see how it is adding up, and there is little opportunity for a dispute. And the droves of drivers (no pun intended) who would spell out the same list of the country’s problems whenever the chance arose–“Gordz chka, luys chka, jur chka, voch mi ban el chka” (There’s no work, no lights, no water, no nothing)–now say that things are “okay,” and even, remarkably, that things are “good.”
This increased ease of living may go unnoticed by many residents, because change sneaks up on a person. But it is obvious to me that the daily or weekly grocery shopping rituals are much different. There is still some haggling that takes place, but more often than not the prices of things are visible for the consumer. The shuka (market) still holds its appeal, but people have also embraced the new stores and supermarkets without sacrificing quality.
And don’t even get me started on communication. One dollar per minute phone calls to the U.S. have been replaced by free Skype calls, constant access to e-mail, and clever IT experts who can make an iPhone work in Yerevan. On a drive from Yeghegnadzor to Sevan with friends, I checked my e-mail with an internet jump drive while passing through rugged mountains and later looking for a lakeside restaurant to eat fresh fish.
I said in my inaugural “Odar’s Corner” column that some may find me excessively positive. The airport employee who surveyed my satisfaction with the airport may think the same. But you know what? There’s a lot to celebrate about Armenia today versus Armenia 15 years ago. A lot to fix, but a lot to celebrate, too.
About author
Kristi Rendahl
Originally from a family farm in North Dakota, Kristi Rendahl lived and worked in Armenia from 1997-2002 and visits the country regularly. She works with the Center for Victims of Torture as the organizational development advisor to 10 torture treatment centers around the world, and is pursuing a doctorate in public administration. Through her travels, she has met Armenians in Lebanon, Syria, Jordan, Turkey, Ethiopia, Moldova, and across the U.S. Currently, Rendahl resides in St. Paul, Minn. Read more at http://blog.kristirendahl.com/
http://www.armenianweekly.com/2012/09/18/15-years-later-is-it-getting-any-better/