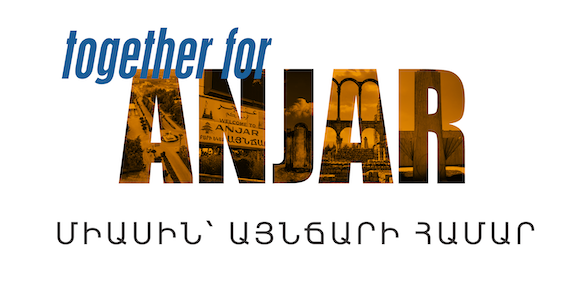 ‘Together for Anjar’ Fundraising Campaign Launched

Lebanon’s economic crisis, which has taken a turn for the worse over the past few months, has been exacerbated by the global COVID-19 pandemic. The drastic depreciation of the Lebanese Pound and hyperinflation have skyrocketed the price of food and basic necessities.

A group of concerned Anjartsis from across the world, supported by local Mousa Ler Associations in various cities, call on Anjartsis and non-Anjartsis alike to support our fellow compatriots who are in dire straits today. Through a one-time contribution or a recurring donation through the “Together for Anjar” crowdfunding campaign, you can provide aid and hope to the most vulnerable families in Anjar.

All of the donations collected from the campaign will be securely transferred to a special account operated by the Armenian Relief Society (ARS) Anjar Akhtamar chapter. Distributions to beneficiary families will be carried out by the Special Relief Committee established in the village in accordance with the Anjar Town Council.

An aerial view of Anjar, Lebanon

Though we are all faced with unprecedented uncertainty and tough economic times, if you feel you can, please donate to the campaign and help make a difference in Anjar.

Anjar’s story is one of exile and return, and exile again. After a historic 53-day self-defense against Ottoman forces during the Armenian Genocide, the Armenians of Mousa Ler (Mousa Dagh) were rescued by French warships monitoring the coastline and taken to Egypt, where they would stay for four years in a refugee camp across from Port Said.

In 1919, the Armenian population returned to Mousa Ler, where they remained until the summer of 1939, when France ceded the Iskenderun/Alexandretta, an autonomous province in northwestern Syria encompassing Mousa Ler as well as other Armenian communities, to Turkey. The overwhelming majority of Armenians chose to leave the area and not to live under Turkish rule

The majority that left Mousa Ler were relocated to a place called Anjar in Lebanon’s Bekaa Valley after being encamped temporarily at Ras al-Basit. The French High Commission of Syria and Lebanon purchased the land and constructed the initial houses there.

Through much hard work, dedication, and perseverance of generations, Anjar flourished from a barren, disease-infested wasteland and became one of the most verdant, vibrant rural communities in the region.