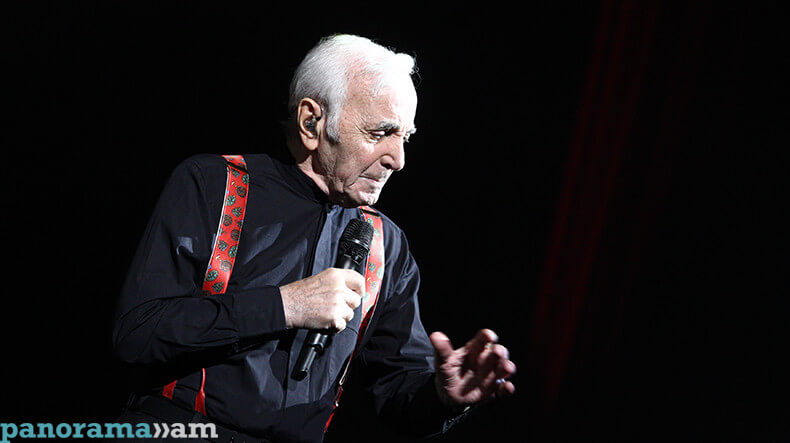 TM Production has launched a flash mob today to celebrate the 96th birthday of the great chansonnier.

“Given the current situation, the annual open-air concert dedicated to Charles Aznavour’s birthday in the square named after him cannot be held this year. That’s why we suggest you join the #CityIsListeningToAznavour flash mob on May 22 by playing songs of the world-famous chansonnier in cafes, cars, balconies and elsewhere,” TM Production said in a statement.

On Friday, at 8pm, the Opera and Ballet Theater of Armenia will present La Boheme ballet dedicated to Charles Aznavour’s birthday on its Facebook page (music by Charles Aznavour, scenario and choreography by Roudolf Kharatian and sets and costumes by Astghik Stepanyan). Garegin Babelyan will act as Jean Charlesm, while Tatevik Grigoryan will perform as Suzette during the ballet performance. The artistic director of the theatre is Honored Artist of Russia Constantine Orbelian.

Charles Aznavour was born in 1924 to a family of Armenian immigrants in Paris. A world-renowned singer and musician, he has also earned praise for his humanitarian work. In 1989, he gathered more than 80 showbiz friends, including Minnelli and Dionne Warwick, to record “For You, Armenia” song, which raised funds for victims of the 7 December 1988 Armenian earthquake.

He continued to raise funds for Armenia and founded the Aznavour Foundation to help “Armenians all over the world, so they in turn help Armenia to become a self-sufficient country,” he said. He served as Armenia’s ambassador to Switzerland, and its representative at UNESCO in Paris.

In a career spanning over 70 years, the legend recorded more than 1,200 songs, released 294 albums, performed over 1,000 concerts in 94 countries worldwide and starred in over 60 movies. He sold 180 million records during his lifetime.

“I’m not afraid of death, I am just happy that I live, see, hear, feel and enjoy the surrounding world,” said Aznavour in his biography.