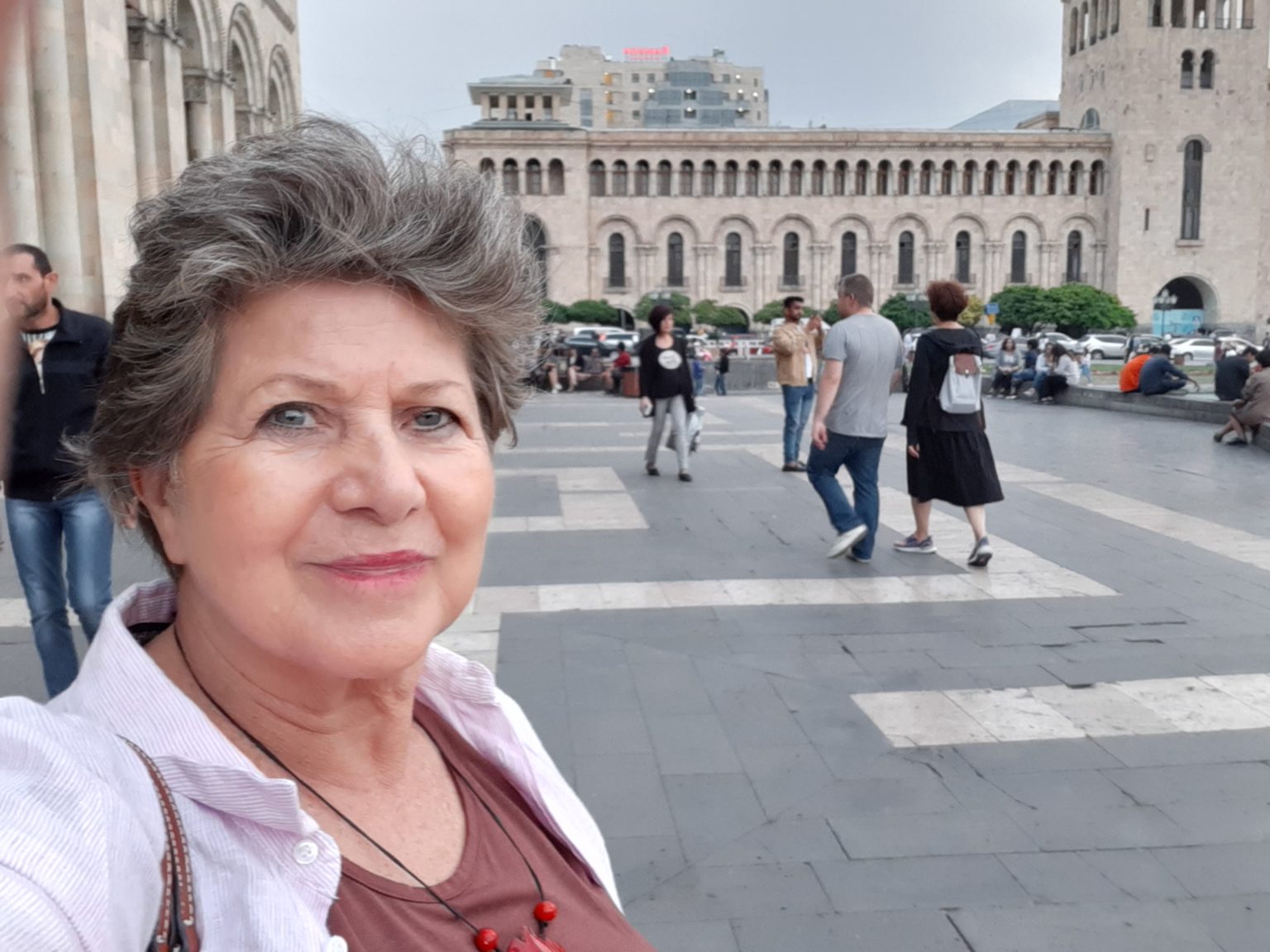 Armenia Nercessian de Oliveira: ‘To Love People, the Beauty of Diversity and Feeling at Home Anywhere’

Special to the Mirror-Spectator

YEREVAN/RIO DE JANEIRO — Armenia Nercessian de Oliveira was born in Brazil, to an Armenian father and a Brazilian mother. She is married to film director Xavier de Oliveira and employed as assistant professor of sociology in Brazil. She worked for the United Nations for 16 years with the United Nations High Commissioner for Refugees (UNHCR) and in Missions in El Salvador and Bosnia-Herzegovina. She is currently a social entrepreneur, co-founder and president of Novica company.

Dear Armenia, during past 20 years you have traveled widely as the president of the Novica Company. What is your company’s mission and how successful you are?

Novica was founded in 1999 to be an Internet platform to give access to the international market to artists and artisans around the world, providing opportunities to grow, to receive more for their work. Products are featured with bios and photo of the artisans, shipped gift wrapped with a handwritten and signed postcard. The goals are to connect people and create an appreciation for other cultures.

Novica started in Los Angeles at the basement of my daughter and son-in-law, Roberto Milk, who is our chief executive officer. It is a project created with family and friends. Within five months we had offices in four countries. Within two years, we raised $20 million, made a partnership with National Geographic, received a World Bank investment and expanded the company to 11 countries. Last year, we celebrated having sent $95 million to the artisans.

When first we met in 2000 in Yerevan, you were scouting opportunities to set up a Novica branch also in Armenia. Why it did not take place?

I am of Armenian descent and have a great interest in having Armenia represented in the Novica system. The country has nice paintings, amazing handcrafts, and I have friends, I had also met the Minister of Culture. But what prevented us from going ahead with our purpose was logistical issues. Novica ships the items straight from the country where we operate to the final customer and the shipping rates were extremely high in 2000.

Presently, the situation has changed and we are again considering opening an office in Armenia. Last September, I attended My Armenia Crafts Festival in Yerevan and visisted other regions to meet some artisans. Novica has started a partnership with the Smithsonian Folklife Festival to feature Armenian artists and artisans. The country has changed — and for better.

Nercessian is a quite familiar name in Brazil due to your brother, popular film and TV actor Stepan Nercessian…

Yes, each time I give my last name in any place I hear the phrase, “are you a relative of Stepan?” and after saying that I am the sister, the next phrase is “I love him” and of course it opens doors and venues to all sorts of kindness. Not only because he is famous; he is loved due to his personality. Stepan is the one who goes to the supermarket, sit in the coffee on the corner, talks to a homeless the same way he does to the highest authorities. Stepan never acted like a celebrity. He was twice elected as city Councilman and to the Chamber of Deputies of the National Congress of Brazil, our parliament, and he was President for eight years of the Actors Guild of Rio de Janeiro.

I have also another actor in our family. Pedro Nercessian, the son of my sister Celina.

Stepan started his career in 1970, in the leading role of the feature film Marcelo Zona Sul, directed by my husband Xavier de Oliveira. In the next five years he had acted in leading roles of ten Features films. Now, at age of 66, his filmography includes 58 feature films, 5 plays and roles in dozens of TV soap operas and TV series.

During his long career, Stepan won many important awards. The most recent, was the award for Best Actor in the film Chacrinha, O Velho Guerreiro by the Brazilian Movie Academy. It is our “Brazilian Oscar.” Stepan was for eight years the President of the Artists Union. Since 1999, he is the President of Retiro dos Artistas, an institution that welcomes elderly artists with no financial resources. I apologize being so enthusiastic about my brother, but he is really a very interesting and captivating person.

Yes, we welcomed him in 2006 in Armenia: how did that trip influence him?

Stepan is very proud of his Armenian heritage, mentioning it in all his interviews. But to come to Armenia had a deep impact on him. He could not stop crying when visited the Genocide Memorial. Each place he visited was full of emotion, especially his visit to Echmiadzin, meeting there the Catholicos. In the streets he saw familiar faces, people that reminded him the Armenian friends of our father.

As a councilman of the city of Rio de Janeiro, Stepan submitted a bill creating the 24th of April the Tribute Day for the Armenian people.

Every Armenian in Diaspora has a unique family story. Please tell us yours.

My father, Karabet and his brother Paulo, are survivors of the Armenian Genocide. My grandfather was taken by the military before the soldiers came to the village to evacuate the children, women and elders.  He doesn’t know what really happened to his father. He was a child.  Later, the mother and brother as all the women, children and elders of Haini, his village, were evacuated by the soldiers for a death march through the desert, like thousands of other Armenians. Before departing, my grandmother managed to hide her two sons ages 5 and 7, a situation that could have happened to other children. After the soldiers left the village, the two young kids roamed the streets, and later ended up in an orphanage from where my father was adopted by a Turkish officer who died and was returned to the orphanage two years later. By then, he had lost contact with his brother. He lived in Greece and then France. In Paris he met an Armenian lady that was trying to reunite Armenians from different countries with their relatives. Thus he knew there was a Nercessian from Haini in Brazil and confirmed to be his brother. In 1930, he came to Brazil to join his brother Paulo, an exciting family reunion after 10 years without anyone knowing the whereabouts of each other.

You have been in Armenia three times. How would you describe those visits?

Coming to Armenia is very special for me. My visits were in three different contexts. The first one was in 1965, when Armenia was a Soviet Republic. The second visit was in 2000 and the third one last year.

The country has changed a lot in all these years. In my last visit I found the people were more optimist, expecting changes and hoping for a better future. Yerevan is a modern city, but the ancient places, buildings, churches, are what attract me more. In all my visits I was so warmly welcomed. In 2000, I took a taxi, started a conversation and told the driver that I was a Brazilian Armenian. When he knew that my first name was Armenia, he refused to charge for the ride and invited me to have a dinner with his family. Last year, I had another nice surprise, having booked a room in a hotel in Jermuk, I was given an upgrade to their best room, for free, because of my name. So many stories to remember.

In 2004 in Los Angeles I met your charming daughter Milena, a film actress. How is her career going?

At that time, Milena was beginning her career. Since then, she has starred in three short films, five feature films, and a TV series. In 2009 she wrote and starred in a one-woman show, “LOL Latina on the Loose,” acclaimed by audiences and critics. She won many awards for that play. Presently, she is writing and acting. Milena started her carrier as Mina Oliveira, suggested by her agent, but lately changed her artistic name to Mina Nercessian. On March, her last movie, “Single Almost Crazy,” co-produced by MGM is going to be released in Brazil. She wrote the screenplay and is in the leading role. Presently, she is writing a TV Series. All that with four children!

What about her brothers?

When I founded Novica my two sons were deeply involved. Fabio started Novica Brazil and was the first director. Raphael is the first web designer of our site. Milena in the merchandising and our top model. A few years later, the three left Novica to follow their artistic careers. Milena in acting, Fabio in composing soundtracks, for one feature film, “Adagio ao Sol,” and for three short films. Raphael had a music band, composing songs and playing guitar. At one point, he started painting and has sold through Novica more than 50 works. Of course, to make a living with music is not always easy and he also works as a computer programmer. Right now, he lives in Portugal with his wife and 8-year-old daughter. Recently he joined the party of Lisbon Armenians and highly enjoyed it.

You had – and still have – an interesting life, being so open to the whole world, traveling constantly, speaking almost a dozen languages, meeting always inspiring people. I am always delighted of such people, so it will be interesting to know what is your motto for life?

To love people, the beauty of diversity and feel at home anywhere in this small world.