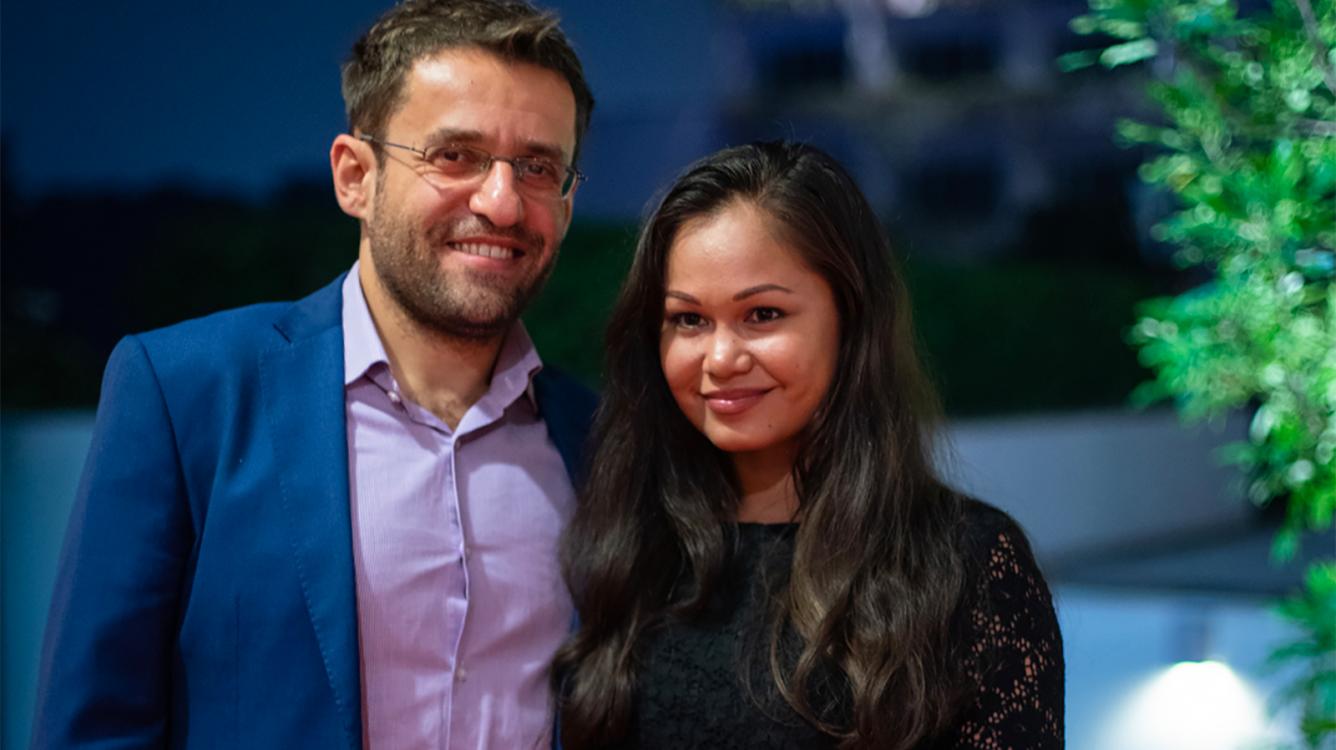 Arianne Caoili, a former Oceania women’s chess champion, Woman International Master, and an incredibly versatile human being, has died due to the consequences of a car crash. Caoili, the wife of Armenia’s number-one grandmaster Levon Aronian, was 33 years old.

On March 15, the Armenian state news agency reported that Caoili was in serious condition after a car crash in Yerevan. Alone in her car, she reportedly lost control and crashed into a concrete barrier under a bridge.

She was brought to the Astghik Medical Center, where doctors initially said her condition was serious, but later they reported positive dynamics in Caoili’s condition. She was kept in an induced coma.

On the evening of Monday, March 30, Aronian shared the terrible news that Caoili had passed away. He did so in a moving tweet which, at the time of writing, has over two thousand replies with condolences.

Caoili was born in Manila, the Philippines, on December 22, 1986, the younger of two sisters born to a Dutch mother and a Filipino father, who was a minister. The family moved to Australia in 1989.

She was an active chess player in her youth and won her first major title on her 14th birthday when she came first in the Asian girls under-16 championship in Bagac, the Philippines, in 2000.

Her most successful year as a chess player was 2009, when she won both the London Chess Classic Women’s Invitational tournament and the Oceania Women’s Zonal Championship.

Caoili changed federations in 2004 and began representing Australia, the country she represented in five Olympiads. Before that, she had played twice for the Philippines.

She became known to the wider Australian public in 2006 when she participated in the fifth season of Dancing with the Stars. She did quite well, finishing in second place with her dance partner Carmelo Pizzino.

Caoili wasn’t an active chess player herself anymore, but she was incredibly busy with a wide variety of projects and engagements. She visited Aronian occasionally at chess events to support him.

“I wouldn’t say I’m a great player, but I am good enough to be nervous enough!” she said.

Caoili and Aronian were engaged in 2015 and married in September 2017 in Yerevan, in the presence of the then Armenian President Serzh Sargsyan and his wife.

Caoili was multi-talented. By education, she was an economist with a Ph.D. on “Russian foreign policy, especially its economic and business relations with Armenia on a state and individual level.” She spoke several languages fluently and loved mountain climbing, cycling, and cooking.

Her Twitter bio lists many more interests such as the economics of space, foresight, ESG funds +SWFs, music, dance, and boxing, apart from chess. She owned a jazz club in Yerevan and recorded an EP in Australia.

After working as a consultant at Price Waterhouse Coopers, she became the managing director at the global strategy consulting firm Akron, which is active in public policy and economics. In this role, she advised international leaders, including the Armenian president. She also co-founded a newspaper in Armenia.

Caoili was also involved in several philanthropic initiatives in Armenia. In 2018, she made a 2,000-km bike tour through Turkey, Iran, and Armenia to raise funds for the Children of Armenia Fund, which, among other activities, builds schools where chess is now taught.

“I’m really proud of that,” Caoili said. “It was a lot of fun, and the central message, besides the historical context and how interesting that was, was to drive home that sport and chess is really important for kids.”

Caoili in a 2019 interview with Maurice Ashley for the Grand Chess Tour.

WIM Emma Guo, one of Caoili’s teammates in the Australian Olympic team, provided the following statement:

“My deepest condolences to Arianne’s family and friends. Arianne was an incredible person. Growing up as a junior chess player, she was Australia’s top female player and someone that I looked up to. I had the great fortune of playing with her in several team events and in getting to know her I was struck by her intelligence, humor, kindness, and perseverance to achieve great things. She played a significant role in my life, introducing me to my partner at an Olympiad several years ago, and I am grateful for her friendship. Arianne will always be in my heart, and I will remember Arianne for her brilliance and the amazing things she achieved. Rest in peace. Gone but never forgotten.”

It is deeply unfair that Arianne is gone. She was highly intelligent, generous, mischievous, and so, so bold. Arianne’s last three Olympiads were my first three. Each day it was inspirational to watch her fight tenaciously, frequently spending all her time thinking down to the last few minutes, and then blitzing through complicated tactics, winning just in time. Afterward, during show-and-tell she would be confidently arguing with Ian [Rogers] why his analysis was wrong; it was entertaining for the rest of the team to watch them sparring. Over the years, it was mesmerizing to see Arianne grow from a child prodigy into a multi-talented woman with a huge heart. She will always be remembered.”

“Such a one-off, multi-talented lady who died far, far too young. She achieved more in her short life than most people would manage in several lifetimes.”

“One day I was coaching Arianne in Canberra and Lev suggested an idea, whereupon Arianne turned to Lev and said, ‘Haven’t you got something to do? Ian is trying to coach me!’ The next Olympiad, when Lev wanted to make a suggestion during the Australian women’s team group analysis, he started his suggestion with: ‘Ian, I don’t want to undermine your authority, but wouldn’t Be6 be good here? (Be6 was winning, of course.) It shows that she wouldn’t even let Aronian interfere with what she wanted to do. But everything was done with a smile.”

Top grandmaster Wesley So, also born in the Philippines but now representing the United States, shared a memory:

When I was just a little boy she would go up to me in tournaments, grab me and whisper fiercely… ‘You can do it, Wesley!’

“We are completely shaken and heartbroken. We last saw her in Romania when Levon won the Superbet Rapid & Blitz. She looked beautiful and was very excited and proud of him.

“I also had a great personal connection with Arianne because not only did we share a firm faith in God, we shared many of the same friends in the Philippines.

“It is tragic and overwhelming for us. No way to imagine what Levon must be going through.”

Chess.com’s thoughts are with Levon and his and Arianne’s family, and we wish them strength in these most difficult times.