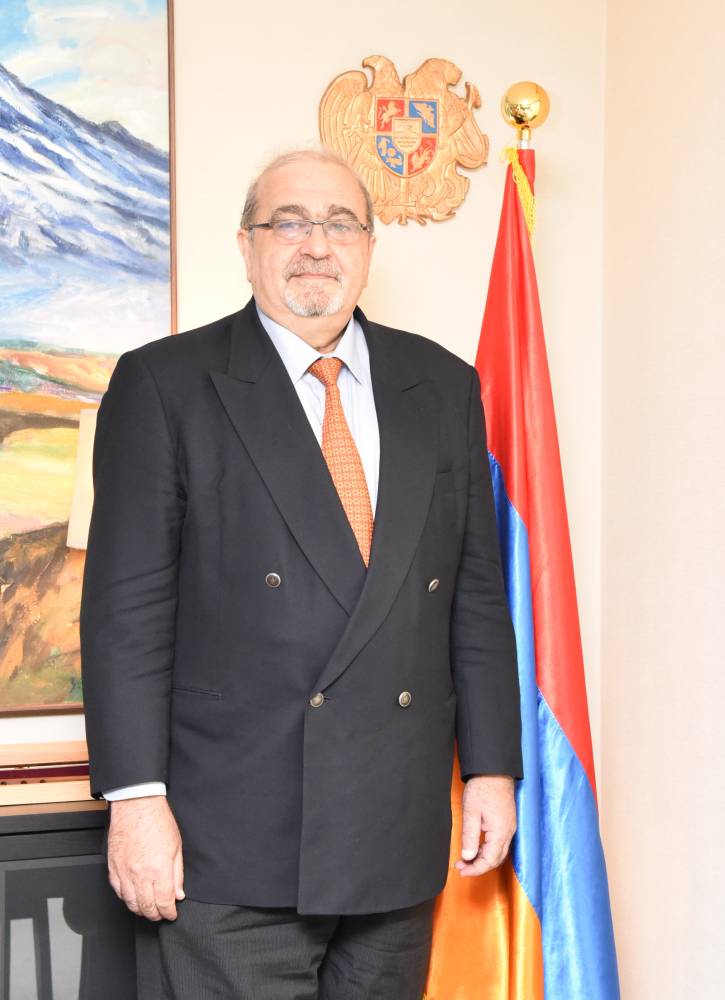 A leap from academia to first Armenian ambassador

As ambassador of a country with one of the longest histories in the world, Grant Pogosyan is eager to share his homeland’s unique culture with Japan. Just as unique, however, is Pogosyan’s path to becoming the first ambassador for Armenia in Japan.

While career diplomats typically move to a new location every few years, Pogosyan has been based in Japan since 1991, building a prestigious academic career as a mathematician before transitioning to the field of diplomacy 10 years ago.

Mathematical talent clearly runs in the family. Both his parents were math teachers, and while they placed no expectations on their children to follow in their footsteps, Pogosyan and his brother also went on to become mathematicians.

It was his passion for logic and computation that eventually opened the door to a future in Japan. Pogosyan entered the prestigious mathematics department at Moscow State University in 1970 when traveling abroad was still difficult for most people in the former Soviet Union. He joined a student-led international exchange initiative called Interclub.

“This club became one of the most interesting things in my life, and we got to know each other’s culture. We had three members who joined from Japan and they were some of the first Japanese with whom I got acquainted,” he said. “My friends triggered my interest in Japan and, in a sense, Japanese culture and language became one of my hobbies.”

Pogosyan says he has always been open to any challenges that come his way, and this is manifested in the Japanese phrase “ dame moto ” (there’s nothing to lose by trying). Although he didn’t think he stood a serious chance, he applied for and won a yearlong visiting researcher’s position at International Christian University (ICU) in Tokyo.

Having greatly enjoyed his first taste of Japan, when Pogosyan heard about a teaching position at ICU two years later, he seized the opportunity. He subsequently returned to Japan for work in 1991, accompanied by his wife and two children. “I was a young and unknown mathematician at the time,” he said with a laugh. “I was thinking of coming to work for two or three years on a contract appointment, but then it became a tenure track.”

Pogosyan first arrived in Japan during the end of the bubble era of extravagant spending. “The ’80s were crazy,” he said. “I was not in business, but even in academics we were doing some symposiums and there were lots of sponsors. We had enough money, and we were hiring very nice venues in those days.”

However, while this came to an end when Japan’s economic bubble burst in the early 1990s, leading to less funds being directed at research, Pogosyan appreciates that Japan has maintained a stable social system.

“We do see a bit of difference between the haves and have nots, but basically Japan is one of the few countries in the world where there is still a very large middle class,” he said.

His diplomatic experiences developed organically due to the fact that Pogosyan was one of the relatively few Armenians living in Japan, coupled with his breadth of knowledge regarding the language, culture and people.

“When Armenia became independent (in 1991), people knew I was here and I started volunteering to become a bridge connecting Japan and Armenia,” he said. “The Armenian Department of Foreign Affairs and public sector knew about me, as someone who was willing to help connect them with local people and organizations.”

In parallel to his full-time work in academia, Pogosyan was a volunteer adviser on Japanese affairs to the minister of foreign affairs. He says he never felt pressured to play this role, and was simply happy to do anything he could to facilitate Armenian-Japanese relations.

With the establishment of the Armenian embassy in Tokyo in July 2010, Pogosyan was a natural choice to help set things up, shifting from academic to diplomat as the first Armenian ambassador to Japan in May 2012. “It often happens the other way around — a former ambassador goes to a university to teach diplomacy or some related subject,” he said. “It was a huge honor and responsibility.”

With the embassy’s 10th anniversary approaching, Pogosyan has seen the relationship between Japan and Armenia blossom over the last decade, pointing out that Japa nese visitors to Armenia have increased substantially over the years. Moreover, in 2017 he wrote “Discover Armenia in 25 Stories,” a travel book in Japanese about his homeland.

Pogosyan sees many parallels between his adopted country and Armenia, noting that both are still mostly monoethnic states that cherish their national traditions while seeking innovation.

According to Pogosyan, science and education are very big now in Armenia, an d par ents in both countries are committed to providing an excellent education for their children overall. Armenia is also building an international reputation for excelling in what Pogosyan describes as science-heavy information technologies.

On the other hand, Armenia maintains its ancient traditional crafts, such as jewelry-making, not unlike Japan. “In order to preserve this tradition, people have to appreciate it and buy it,” he said. “The balance — the harmony between old and new — is very important. I think this is one of the gems of Japan.”

Having served as an adviser to the Armenian minister of foreign affairs on a voluntary basis since 2004, Pogosyan then began working to help establish the first Embassy of Armenia in 2010. He was officially appointed as the first ambassador to Japan in 2012, as well as to South Korea in 2014. Pogosyan is also a professor emeritus at ICU.

In his leisure time, he enjoys painting, cycling and walking around Tokyo’s neighborhoods and interacting with local residents in the spirit of grassroots diplomacy.