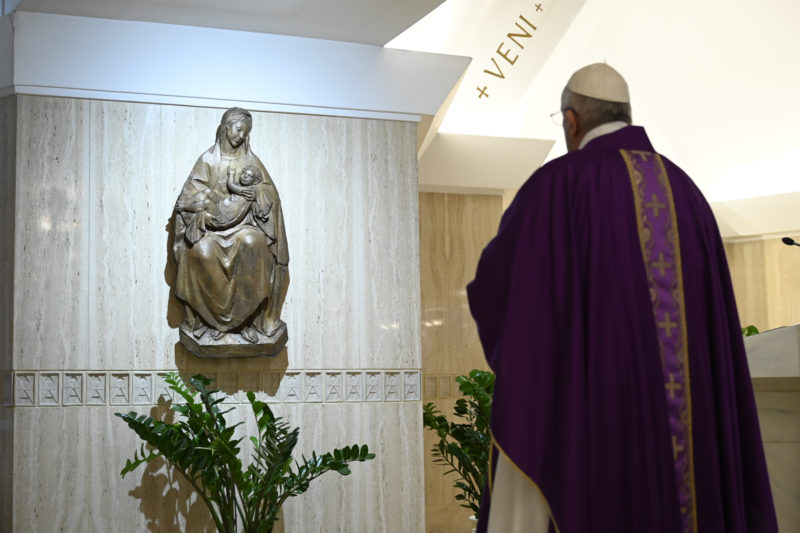 The Fact We Are Praying for Others Is a Good Sign, Suggests Pope Francis (Full Text of Morning Homily)

Pope Francis gave this reminder today, March 27, as he offered his private daily Mass at his residence Casa Santa Marta for the victims of Coronavirus, which so far has claimed over 8000 lives in Italy, as of Thursday evening.

Today, the Holy Father expressed gratitude and prayed for those who are praying for others facing difficult situations at this time.

In today’s homily, the Holy Father reflected on today’s reading from the book of wisdom and how it foreshadows what would happen to Jesus, reported Vatican News.

“It’s almost an historical account of what will happen later,” the Jesuit Pontiff observed, noting how “the wicked” concentrate and despise Jesus since he calls them out on their sinful lives, and hence plan to test Him “with revilement and torture,” eventually “condemning Him to a shameful death.”

In the homily, Pope Francis pointed out how despite all the forces of evil working against Him, working for His demise, that He always took the high road and never dignified their evilness with, what would have been completely human and normal, reactions.

While Jesus is both human and divine, and we are only human, we still can–the Pope recommends–try to learn from Him and how he handled the devil’s ferocious attacks.

The Pope also reflected on how we ought to pray, noting we must admit candidly and completely to God that we are sinners.

“In this case, the Lord teaches us how to pray, how to get close, how we must approach the Lord: with humility. There is a beautiful image in the liturgical hymn of the feast of Saint John the Baptist.

Like those who came to the Jordan River to be baptized, who arrived “naked in soul and barefoot,” we too must “pray with a naked soul, without makeup, without disguising one’s virtues.”

“We read at the beginning of the Mass that the Lord forgives all sins but He needs us to show him our sins, in our nakedness. To pray thus, with a naked heart, without covering up, not even trusting what I learned on the way to pray…,” is how we must come to him.

Silence, Pope Francis underscored, is also the appropriate response to the “little acts of fury” that we face each day.

Such acts of fury can be manifested in large ways such as persecution, and other smaller, but still dangerous ways, such as gossip.

Noting gossip is not as strong as persecution, perhaps, but nonetheless a kind of fury, because it destroys others.

“Let us ask the Lord for the grace to fight against the evil spirit”, the Pope said in conclusion, “to dialogue when we need to dialogue, but, in the face of the spirit of fury, to have the courage to remain silent, and allow others to speak.”

Before concluding, the Pope exhorted faithful to partake in Spiritual Communion in this difficult time, and ended the celebration with Eucharistic Adoration and Benediction.

Here are the Holy Father’s words, followed by the prayer for Spiritual Communion:

I prostrate myself at your feet, O my Jesus, and I offer you the repentance of my contrite heart, which abases itself in its nothingness in Your Holy Presence. I adore you in the Sacrament of Your Love; I desire to receive You in the poor abode that my heart offers You. While waiting for the happiness of a Sacramental Communion, I want to possess You in spirit. Come to me, O my Jesus, that I may come to You. May Your Love inflame my whole being, in life and in death. I believe in You, I hope in You, I love You. Amen.

The Masses in Francis’ chapel normally welcome a small group of faithful, but due to recent measures’ taken by the Vatican, are now being kept private, without their participation.

It was announced in recent days that the Pope would have these Masses, in this period, be available to all the world’s faithful, via streaming on Vatican Media, on weekdays, at 7 am Rome time.

This comes at a time too when the Italian bishops’ conference has canceled public Masses throughout the nation, until at least April 3rd, following guidelines put out by Italian authorities.

In addition to Santa Marta, the Vatican has taken other steps to keep people safe and to stay close to the Pope, even if from a distance. They are televising the Pope giving privately, from the papal library, his weekly Angelus and General Audience addresses.

The Vatican Museums are now closed, along with the Vatican’s other similar museums. There have also been various guidelines implemented throughout the Vatican, to prevent the spread of the virus.

To date, the Vatican has confirmed that four people have been tested positive for Coronavirus in the Vatican, and those who were in close contact with them are all being quarantined at home. Recent reports, not confirmed yet by the Holy See, note there is an Italian monsignor who works at the Italian section of the Vatican Secretariat for State, and lives the Pope’s residence, Santa Marta, has also tested positive and is being hospitalized for COVID19.

The Vatican has neither confirmed nor denied reports which say the Pope was tested since then for COVID19.

By this evening in Rome, Italy’s civil protection agency will confirm that more than 7,000 Italians have died from the virus.

For anyone interested, the Pope’s Masses at Santa Marta can be watched live and can be watched afterward on Vatican YouTube. Below is a link to today’s Mass. Also, a ZENIT English translation of the Pope’s full homily can be read below:

That Word of the Lord that we heard yesterday: “Return, return home” (Cf. Hosea 14:2); we also find the answer in the same Book of the prophet Hosea: “Come, let us return to the Lord”. It’s the answer when that “return home” touches the heart: “Let us return to the Lord: for He has torn, that He may heal us; He has stricken, and He will bind us up. [. . . ] ”Let us press on to know the Lord; His going forth is sure as the dawn” (Hosea 6:1.3). Trust in the Lord is sure: “He will come to us as the showers, as the spring rains that water the earth” (v. 3). And, with this hope, the people begin to walk to return to the Lord. And one of the ways to find the Lord is prayer. We pray to the Lord; we return to Him.

In the Gospel (Cf. Luke 18:9-14) Jesus teaches us how to pray. There are two men, one who is presumptuous; who goes to pray, but to say that he is good, as if to say to God: “Look, I am so good: if you need anything, tell me, I’ll resolve your problem.” He turns to God thus — with presumption. Perhaps he did everything that the Law said, he said so: “I fast twice a week, I give tithes of all that I get” (v. 12) . . . “I’m good.” This reminds us also of two other men. It reminds us of the elder son of the parable of the Prodigal Son, when he says to

In this case, the Lord teaches us how to pray, how to get close, how we must approach the Lord: with humility. There is a beautiful image in the liturgical hymn of the feast of Saint John the Baptist. It says that the people came to the Jordan to receive baptism, “naked in soul and barefoot”: to pray with a naked soul, without makeup, without disguising one’s virtues. We read at the beginning of the Mass that the Lord forgives all sins but He needs us to show him our sins, in our nakedness. To pray thus, naked, with a naked heart, without covering up, not even trusting what I learned on the way to pray. . . Pray, you and I, face to face

Let’s not forget this, which the Lord teaches us: to justify myself is arrogance and pride; it’s to exalt myself, and to disguise myself with what I am not. And the miseries remain inside. The Pharisee justified himself. It’s necessary to confess one’s sins directly, without justifying them, without saying: “But no, I did this but it wasn’t my fault . . . We must have a naked soul, a naked soul.

Today also, Pope Francis ended the celebration with Eucharistic Adoration and Benediction, inviting the faithful to make a Spiritual Communion.

Here is the Prayer Recited by the Pope

My Jesus, I believe that You are really present in the Most Holy Sacrament of the altar. I love You above all things and I desire You in my soul. As I cannot receive you sacramentally now, come at least spiritually into my heart. And, as You have already come, I embrace You and unite myself wholly to You. Let me never be separated from You.