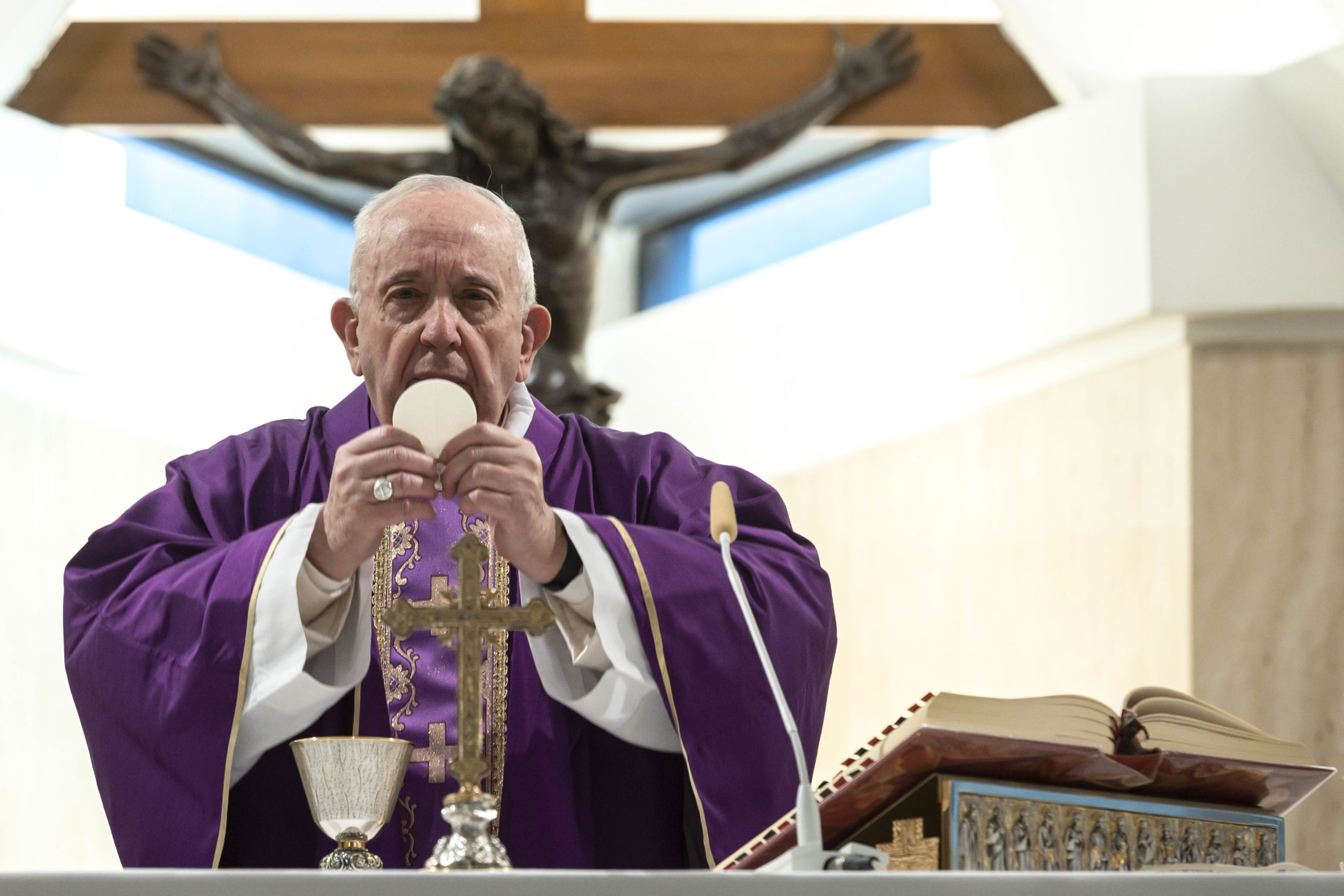 Pope Francis told them to faithful worldwide to welcome his invitation, during his private daily Mass at his residence Casa Santa Marta, again offered for the victims and those affected by the Coronavirus, praying especially today for those struggling financially at this time.

“Let us pray today for those persons who are beginning to experience economic problems because of the pandemic, because they cannot work,” Francis said, observing: “All of this affects the family. We pray for those people who have this problem.”

In his homily, the Holy Father reflected on today’s Gospel reading from St. John, which tells the healing of the functionary’s son in Cana in Galilee (John 4:43-54), reported Vatican News.

After he asked for his the Lord to heal his son, Francis recalls that Jesus “reproves him a bit – everyone – but him as well…. Instead of staying silent, the functionary continues, saying ‘Lord, come down before my child dies.’”

Following this, the Lord reassures the worried father that his child would survive.

Exploring how we effectively speak to God, and pray, Francis said three elements are required, namely faith, perseverance, and courage.

The Masses in Francis’ chapel normally welcome a small group of faithful, but due to recent measures’ taken by the Vatican, are now being kept private, without their participation.

It was announced in recent days that the Pope would have these Masses, in this period, be available to all the world’s faithful, via streaming on Vatican Media, on weekdays, at 7 am Rome time.

This comes at a time too when the Italian bishops’ conference has canceled public Masses throughout the nation, until at least April 3rd, following guidelines put out by Italian authorities. The entire country is on lockdown. Many countries worldwide now are increasingly taking precautions against the virus.

In addition to Santa Marta, the Vatican is taking other steps to discourage crowds and keep people safe. They are televising the Pope giving privately, from the papal library, his weekly Angelus and General Audience addresses.

Moreover, the Vatican Museums are now closed, along with the Vatican’s other similar museums. There have also been various guidelines implemented throughout the Vatican, to prevent the spread of the virus.

To date, one person, an external visitor, has been tested positive for Coronavirus in the Vatican. The five people the individual had contact with, are being quarantined.

For anyone interested, the Pope’s Masses at Santa Marta can be watched live and can be watched afterward on Vatican YouTube. Below is a link to today’s Mass. Also, a ZENIT English translation of the Pope’s full homily can be read below:

They are the three things that are necessary to do a good prayer. The first is faith: “if you don’t have faith . . . “And so many times, prayer is only oral, with the mouth, but it doesn’t come from the faith of the heart; or it’s a weak faith . . . We think of another father, that of the possessed son, when Jesus answers: “All things are possible to him who believes”; the father who says clearly: “I believe; help my unbelief!” (Cf. Mark 9:23-24). Faith in prayer — to pray with faith, be it when we pray outside [in a place of worship], be it when we come here, and the Lord is there: do I have faith, or is it a habit? Let’s be attentive in prayer: we must not fall into the habit without the awareness that the Lord is there, that I am speaking with the Lord and that He is capable of solving the problem. The first condition for a true prayer is faith.

The second condition, which Jesus Himself teaches us, is perseverance. Some ask but grace doesn’t come: they don’t have this perseverance, because at bottom they have no need, or don’t have faith. And Jesus Himself teaches us the parable of that man who goes to his neighbour at midnight to ask for bread: perseverance in knocking on the door (Cf. Luke 11:5-8). Or the widow, with the iniquitous judge: and she insists and insists and insists: it’s perseverance (Cf. Luke 18:1-8). Faith and perseverance go together, because if you have faith, you can be sure that the Lord will give you what you ask for. And if the Lord makes you wait, knock, knock, knock <and> in the end, the Lord gives the grace. However, the Lord doesn’t do this to make Himself desired, or because He says “better that he wait,” no. He does so for our good, so that we take it seriously. To take prayer seriously, not as parrots: bla, bla, bla and nothing else. Jesus Himself will rebuke us: “Do not be as the pagans that believe in the efficacy of prayer <with> words, so many words” (Cf. Matthew 6:7-8). No, it’s perseverance <needed> there; it’s faith.

And the third thing that God wants in prayer is courage. Someone might think: is courage necessary to pray and to be before the Lord? It is, the courage to be there asking and going on, rather, almost . . . almost — I don’t want to say a heresy — but almost as though threatening the Lord. As Moses’ courage before God, when God wanted to destroy the people and make him the head of another people, he says: “No. I will stay with the people” (Cf. Exodus 32:7-14). Courage, the courage of Abraham, when he negotiates Sodom’s salvation: “And if there were 30, and if there were 25, and if there were 20 . . . “: There was courage there (Cf. Genesis 18:22-33). This virtue of courage is so necessary, not only for apostolic action but also for prayer.

Finally, the Pope ended the celebration with Eucharistic Adoration and Benediction, inviting the faithful to make a Spiritual Communion.

Here is the Prayer Recited by the Pope

I prostrate myself at your feet, O my Jesus and I offer You the repentance of my contrite heart, which abases itself in its nothingness in your holy Presence. I adore you in the Sacrament of your Love, the Eucharist. I desire to receive You in my poor abode, which offers You my heart; while waiting for the happiness of Sacramental Communion, I want to possess You in spirit. Come to me, O my Jesus, that I may come to You. May your Love inflame my whole being in life and in death. I believe in You, I hope in You, I love You. Amen.