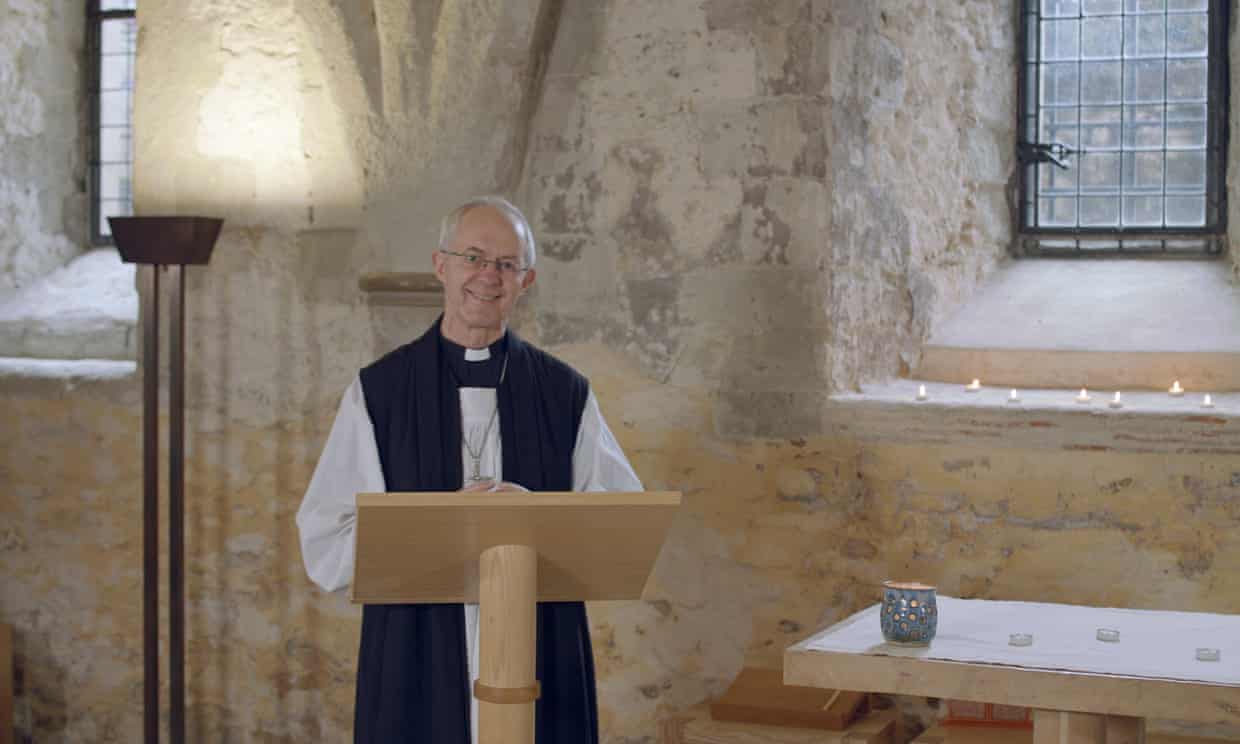 The archbishop of Canterbury has said people face a choice between “pulling up the drawbridge and looking after ourselves” or turning towards others in the coming weeks as the coronavirus crisis escalates.

His message was delivered in a special church service recorded at Lambeth Palace and broadcast via Facebook, BBC Radio 4, and 39 local BBC radio stations. The Church of England suspended public services of worship last week, but thousands of parishes have turned to livestreaming morning prayer and services.

Justin Welby said: “At difficult times we have a choice. We can focus on fear, on ourselves and what we cannot do. Or we can turn to God and let God lead us into praying for the world, and let prayer flow into us, taking creative and loving action.

“That’s what we want to do today, to remind ourselves that life carries on and that there is much to celebrate in our communities.

“To listen to the voice of God’s caring love for us, and his encouragement to turn ourselves towards others, and how we can care for those around us, in person or virtually.”

He added: “The temptation is to pull up the drawbridge and just look after ourselves. That’s the kind of thing that leads to panic-buying, to growing fear, and to spiritual and emotional as well as physical isolation.”

As part of a national day of prayer and action on Sunday, the C of E has urged people to place a lighted candle in their windows at 7pm. It is also asking people to “ring someone who is isolated and vulnerable; buy an extra item and place it in your local food bank, keep your night shelters open”.

In the past week, many parishes have adapted quickly to digital services. More than 1,000 people have been joining online morning prayer in the past week at St Martin-in-the-Fields, in Trafalgar Square in central London.

“The maximum capacity of the church is 850, which we might reach at Christmas,” said the Rev Sally Hitchiner. “Normally our Facebook page is very sleepy.”

This week would be the first time that St Martin’s had not opened its doors on a Sunday morning in its 300-year existence, she added. “I’m really sad about that.”

Many people found comfort in a time of crisis in ritual, she said. “People need anchoring. Everything is being pulled from underneath them. They need something that roots them.”

At St Nic’s in Durham, more than 2,300 people watched a streamed service last Sunday, compared with a physical attendance in normal circumstances of about 300. Morning prayer, normally attended by about a dozen people, is being viewed by more than 200 people daily.

The Rev Arun Arora said: “We know those viewing figures need to be treated with caution, but even if you discount by two-thirds, that’s still double the number we usually get through our doors.”

He added: “People are groping for meaning and hope. The challenge is how to articulate a counter-narrative of hope in a way that’s compelling and meaningful. One way of doing that is ritual when so much of people’s usual daily ritual has gone.

“In the midst of uncertainty, where do you find constants? We’re trying to offer that constant.”

Arora initiated a digital strategy for the C of E when he was its director of communications, a post he held until 2017. Some clergy had been reluctant to embrace the development “but in the past week the number of clergy now broadcasting on Facebook Live has gone astronomical. People who never would have gone near this are now doing it out of necessity.”

The Rev David Meakin, part of a group of 11 parishes near Aylesbury, Buckinghamshire, said the C of E was having to work out “an entirely new way of doing things”.

The churches will be broadcasting morning prayer and services online from Sunday, but Meakin said a significant proportion of congregations were elderly.

“They don’t go on the internet, it’s not a place that they go.” But, he added: “Frankly, even if a few access it, it’s still worth doing.”

Canon Michael Johnson, the acting dean of Bristol Cathedral, said: “We are livestreaming our services. The early indication is that many more people are using this option than would habitually attend in person. We have found, through the feedback that we are receiving, that people are appreciating and are feeling supported by being a part of a virtual congregation.

“We are also doing what we can to care for the cathedral congregation, by keeping in touch, largely by phone, but using other means as well as the need arises.

“This is a challenging time for the whole world, but a time when we can keep helping our neighbour as best we can and continuing to pray, confident in a God of love and hope.”