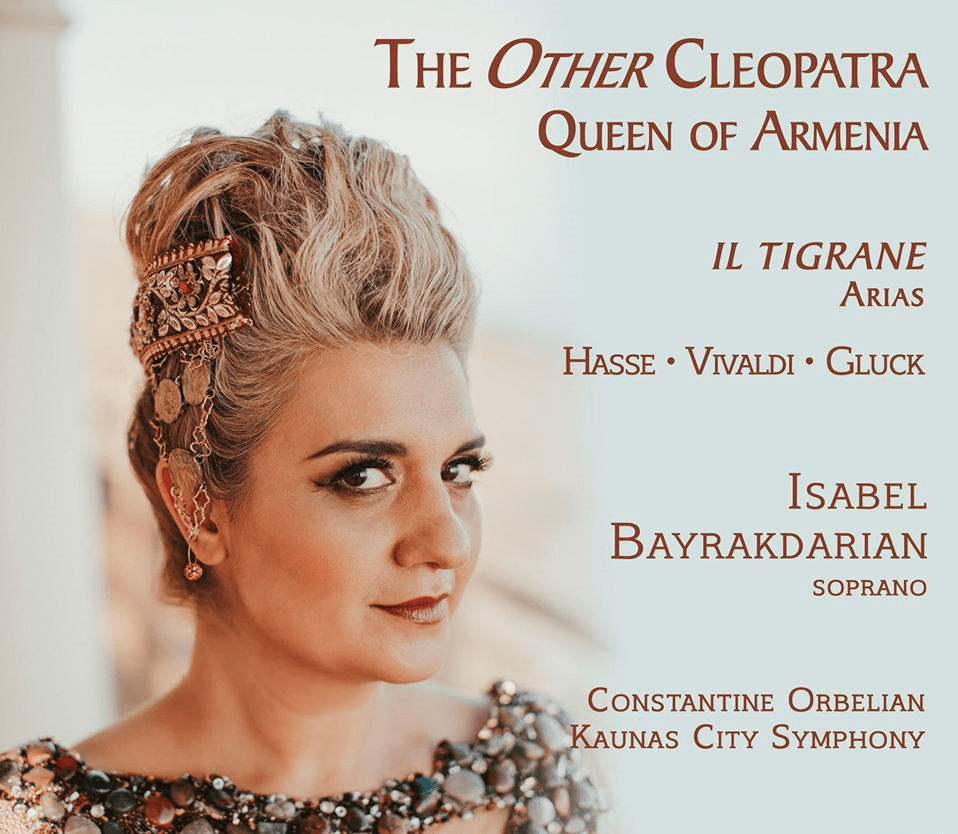 Soprano Isabel Bayrakdarian’s “The Other Cleopatra: Queen of Armenia” • MassisPost

Operatic soprano and proud recipient of the Republic of Armenia’s Komitas and Movses Khorenatsi medals, Isabel Bayrakdarian’s album, “The Other Cleopatra: Queen of Armenia” released today, features three operas bearing the title “Il Tigrane,” by baroque composers Hasse, Vivaldi and Gluck, all of which are based on the same libretto or storyline by Abate Francesco Silvani.

It was by coincidence that Bayrakdarian came across baroque composer Hasse’s opera manuscript “Il Tigrane” which celebrates the life, loves, virtues and triumphs of the Armenian King Tigranes II, also known as Tigranes the Great of Armenia or Medzn Tigran in Armenian. This discovery led her to lay the groundwork for her new album, conducting research at the University of California, Santa Barbara (UCSB) where she is an Associate Professor of Voice and Opera. “Like all serendipitous connections, this project found me, instead of the other way around,” said Bayrakdarian.

Fascinated by the manuscript and her strong connection to her own Armenian identity, Bayrakdarian embarked on an extensive scholarly work at UCSB, immersing herself in researching other baroque composers who had written operas about Tigranes II. “I discovered there are at least twenty-four operas written about him, but most manuscripts were lost,” said Bayrakdarian.

She reveals that while there are many wonderful arias and ensembles in the newly discovered operas, to give her project more focus and more importantly, to make it fit her own voice and temperament, she concentrated on one of the main roles in the opera: Cleopatra of Pontus, daughter of Mithridates VI and later Queen Consort of King Tigranes II.

Bayrakdarian reminisces learning about King Tigran in Armenian history classes in her youth, but emphasizes that not much is taught about his wife Cleopatra (not to be confused with Cleopatra of Egypt). “Our history books omitted Cleopatra’s name and existence completely,” said Bayrakdarian. “She was in fact instrumental in making Tigranes II the greatest king in Armenian history, through the marriage alliance of the two mighty nations: Armenia and Pontus. I immediately felt a personal connection to this new Cleopatra, and was driven by a keen desire to bring awareness to her existence and to give her a voice, literally, after 2000 years of silence and obscurity. This impetus, as well as the fact that the newly discovered arias were gorgeous and were significant additions to the baroque opera cannon, made it very easy for me to actualize my project ‘The Other Cleopatra: Queen of Armenia,’ added Bayrakdarian.

What distinguishes this unique album from others she has released, is Bayrakdarian’s collection of unknown, unreleased operatic arias, which are world premiere recordings, all coming from different operas united by the same liberetto or storyline. “This offers the listener a rare chance to view Cleopatra from the perspective of three prolific composers — Hasse, Vivaldi and Gluck—using the same text to animate very different artistic expressions. Vocally, the composers’ choice of vocal range for the role of Cleopatra sits differently, making for a very diverse vocal showcase,” she added.

Bayrakdarian feels blessed and is passionate about her vocal career as she is about being an associate professor. “Teaching and performing are more similar than one might think. They are both about giving. I’ve always been passionate about performing- there’s no way to describe the incredible feeling of being on stage, connecting with my audience, and being a conduit for the divine through my voice. I’m equally passionate about guiding young singers as they grow into their full potentials, and to help equip them with a solid technique so they can also be free to speak and sing their truths,” revealed Bayrakdarian.

For young, aspiring artists Bayrakdarian believes: “There is one single piece of advice that keeps getting reinforced in my life again and again- find out what you love to do, and do it fearlessly! If you’re led by your inner voice/intuition and are passionate about sharing it and adding value to the collective, then you will always find your niche/calling, be a trailblazer, and become someone who stands out because they create something new.”

Among her many accolades, Bayrakdarian has been featured as a vocalist on the Grammy-Award winning soundtrack of the film “The Two Towers” from The Lord of the Rings trilogy and on the soundtrack of Atom Egoyan’s “Ararat.” She sings on the BBC-produced short film “HOLOCAUSTA Music Memorial Film from Auschwitz,” as well as her Gemini-nominated film “Long Journey Home,” documenting her first visit to her ancestral homeland, Armenia. Bayrakdarian is the winner of four consecutive Juno Awards for Best Classical Album among several other awards and honors.

“The Other Cleopatra: Queen of Armenia,” is available for purchase or download on Amazon, Arkivmusic.com, iTunes and Isabel Bayrakdarian’s official website www.bayrakdarian.com