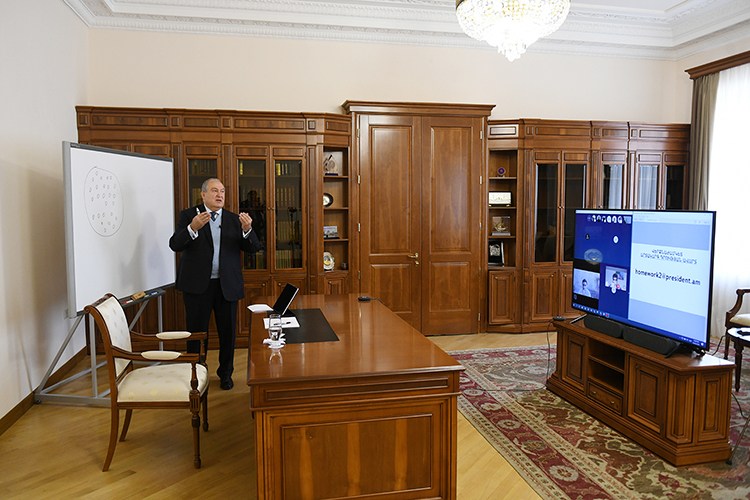 YEREVAN (Armradio) — President Armen Sarkissian has initiated a series of online lectures aimed at providing students with continuous education through the use of distance learning methods amid the state of emergency.

Today, the President delivered an online lecture for a group of students of the Faculties of Mathematics and Mechanics, Physics, Informatics and Applied Mathematics, as well as Oriental Studies of the Yerevan State University.

Among other topics, the President referred to the spread of the coronavirus in the world.

“We all live in special times when coronavirus is spreading in Armenia and around the world. Each of us strives to live, not by self-isolation, but by maintaining a certain distance from others. I think keeping social distance and focusing on own work is really a good thing, especially if you are young, if you have a lot to think about, to learn,” president Sarkissian said.

The President said that during the past two millennia there have been numerous epidemics that have been of both bacterial and viral nature. Before the antibiotics would be discovered social distancing or self-isolation was the only way to fight epidemics, he said.

Speaking about the coronavirus, the President said we are going to overcome it together.

“Remember that each of you must have a clear goal and plan for this or the coming few months and be disciplined at the same time,” the President said.

“Being well-organized and disciplined is essential. Take responsibility not only for our country, our nation, this great health problem, but also for yourself. One of your most precious values is your time, and if you are home for a month and connected to the world virtually, then you should make the most of it,” President Sarkissian stated.

“Today, the world is very different. I’ve been thinking about that world for many years, even trying to apply mathematics to the world I call quantum. In the quantum sense, the processes that take place in today’s world are not classical because the speeds are different, and we often move at a very high speed. Second, we communicate at the speed of light. Third, it is quantum in the sense that the old approaches, whether in politics, economics, relations, are practically unworkable, new forms are being created. Therefore, global risks also acquire a certain quantum character, that is, they are not classically predictable,” the President noted.

“It is unpredictable that, for example, if the virus starts in China, where is the next country, – Italy or, let’s say, France. In one of my speeches months ago, when I was speaking about the quantum world, I gave an example that, if there is a disease, let’s say, in China, the next countries might be, say, Argentina and Italy. This, of course, was not a prediction, but a quantum process as well. Of course, you can make this conspiracy theory that I knew it would be in China, Italy would come, but that’s just a quantum behavior,” he added.