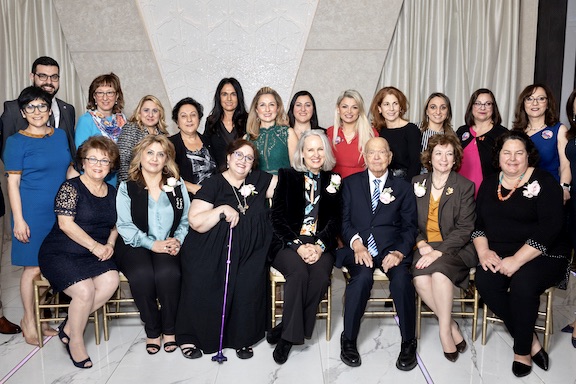 More than 250 community leaders, dignitaries, educators, and supporters attended the Armenian National Committee of America – Western Region Education Committee’s fourth annual Armenian Genocide Education Luncheon. The event was held on Saturday, March 7 in Burbank, CA. Held since 2016, the Luncheon seeks to honor K through 16 public school educators who have gone above and beyond to incorporate a comprehensive lesson plan on Armenian Genocide studies within their classroom curriculum.

The event opened with the singing of the United States and Armenian national anthems, performed by Sosie Haboyan and Sose Hovannisian, respectively.

Education Committee Chairwoman Alice Petrossian then led a moment of silence for former Assemblymember Katcho Achadjian, who had unfortunately passed away a few days prior to the event.

Following Petrossian, Event Committee Chairwoman Sedda Antekelian welcomed the attendees and thanked them for making the sold-out event a success. She then opened the program with a clip of testimony from Armenian Genocide survivor Hagop Asadourian, who is one of 400 interviewees from the testimony collection of the Armenian Film Foundation, that have all been integrated and digitized into the University of Southern California Shoah Foundation’s Visual History Archive and used for educational purposes via USC Shoah Foundation’s online website for teachers and students, IWitness.

Following Abovian’s remarks, Congresswoman Chu took the stage to thank the organizers for their tireless efforts to advocate for the education of the Armenian Genocide.

Next, filmmaker Ani Hovannisian- Kevorkian, who served as the Keynote Speaker of the event, presented a trailer of her newly featured documentary “The Hidden Map,” which depicts the gripping encounters of Hovannisian-Kevorkian’s travels through Turkey in search of her forbidden ancestral home along with a solitary Scottish explorer that she met along the way.

Following the keynote speech by Hovannisian-Kevorkian, ANCA-WR Board Member Anahid Oshagan, highlighted the litany of projects that the tireless members of the Education Committee members have been engaged in for years, including teacher workshops, preparations of teaching resources about the Armenian Genocide, as well as their continued advocacy to include Armenian Genocide in various educational curriculums.

The program also featured talented musicians from Lark Musical Society, who performed “Adagio” by Aram Khachatryan and “Haberban” by Komitas, as well as a beautiful dance performance of “Vagharshapat” by AYAC Areni Dance Group.

At the conclusion of the luncheon, ANCA-WR Education Committee Chair Alice Petrossian announced the renaming of the Armenian Genocide Higher Education Award to the Richard G. Hovannisian Higher Education Award. Petrossian concluded by stressing the importance of genocide education within school curriculum and requested the attendees to nominate educators from their local districts for next year’s luncheon.

The Armenian National Committee of America – Western Region is the largest and most influential nonpartisan Armenian American grassroots advocacy organization in the Western United States. Working in coordination with a network of offices, chapters, and supporters throughout the Western United States and affiliated organizations around the country, the ANCA-WR advances the concerns of the Armenian American community on a broad range of issues.