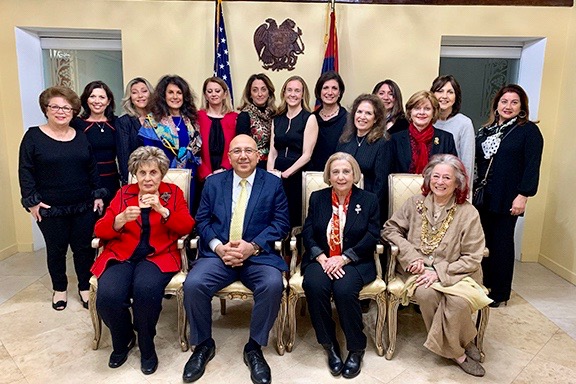 GLENDALE –The Consulate General of Armenia in Los Angeles and the Los Angeles chapter of the Armenian International Women’s Association organized a festive reception dedicated to International Women’s Day. Armenian-American ladies distinguished by their work in public, political, charitable, literary, cultural, and media realms were invited. The event was held on Tuesday, March 10.

Following his opening remarks, Consul General of Armenia in Los Angeles Ambassador Armen Baibourtianpresented a brief historical overview of the perception relating to the role of Armenian women and its legal articulation in various periods of shaping of the Armenian social and legal thought, including Gosh’s code of laws “Datastanagirk,” Shahamirian’s constitutional writing “Snale of Glory,” and the Constantinople Armenian national constitution. Ambassador Baibourtian stressed that the equality of Armenian men and women has been emphasized at various stages of the development of Armenian legal thought. Another manifestation of the deep roots of the Armenian woman’s perception of equality, according to Ambassador Baibourtian, is the Armenian linguistic mentality, which has not separated the masculine and feminine in the language by defining different genders.

The Consul General also highlighted the remarkable role of the Armenian women in any period of our nation’s history. Dr. Baibourtian noted that the Armenian women, with their prudence and wisdom, have always been a pillar of support for Armenian men in challenging times. Statistical data testifies that every nation has a continued development, including economic, when there is an equality between men and women.

Nelly Saroyan, Minister-Counselor at the Consulate General of Armenia, Nicole Nishanian, President of AIWA-LA, as well as Hermine Janoyan and Marisa Najaryan, AIWA-LA Board members were among the speakers.

AIWA is a nonprofit organization with its worldwide membership. Without alignment to any political or religious group, since its inception in 1991, AIWA has been successful in bringing together creative women of various generations, diverse in interests and academic backgrounds, to fulfill its mission.