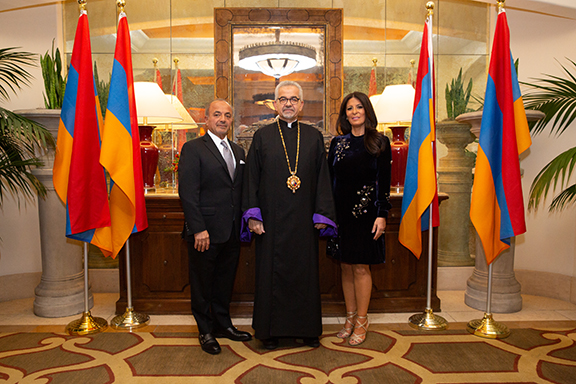 The Armenian Cultural Foundation hosted its annual gala on March 1 at the Montage Hotel in Beverly Hills, where long-time supporters and benefactors Hovsep and Elizabeth Boyadjian were honored and the organization recognized Western Prelate Archbishop Moushegh Mardirossian for his 25-year service as the head of the Armenian Prelacy in the Western Region. The event raised $400,000.

The ACF had chosen the Boyadjians for their storied activism and philanthropy, which spans decades in the Western Region community and extends to Armenia and Artsakh, as well as Antelias, Lebanon, the seat of the Holy See of Cilicia. Furthermore, for the past decade, Elizabeth Boyadjian has been a driving force behind the success of the ACF’s annual galas, which have become a centerpiece event for the California Armenian-American community, raising tens of thousands of dollars to advance the ACF’s mission.

In recognizing the couple, Avedik Izmirlian, the chairman of the ACF, said that our national institutions are flourishing and strong due to financial sacrifices made by community members.

“Thank God, since this army are pretty large and we are confident that it will remain that way, because they believe that they are sacrificing for a higher and more noble cause,” said Izmirlian whose remarks were referencing the number of generous contributors who advance the ACF’s mission.

With that preface, Izmirlian invited Hovsep and Elizabeth Boyadjian to the stage to receive a special award, which was presented by Izmirlian and fellow board member attorney Melkon Melkonian.

A visibly moved Hovsep Boyadjian, who spoke on behalf of the couple, said that his support for the ACF stemmed from his deep rooted knowledge that the organization was the only true conduit of the national aspirations of the Armenian people and the only entity that advances the Armenian cause for justice.

Before honoring the Boyadjian, Izmirlian was joined on stage by fellow ACF board member attorney Levon Kirakosian. Together they invited Varant and Hoori Melkonian to stage and offered the organization’s gratitude for their decades-long support of not only the ACF but also myriad community organizations, programs and projects by presenting a painting by noted artist Vrej Tahamzian. The Melkonians graciously sponsored this year’s ACF gala.

“Dear Varant and Hoori, your continued commitment is a unique phenomenon, for which please accept our repeated gratitude as we wish you lasting success,” said Kirakosian.

In his remarks before the awards presentations, Izmirlian thanked ACF supporters emphasizing that the construction of community and youth centers in the Western United States and in Armenia, as well as the multiple youth programs and cultural, humanitarian and educational projects would not have been possible without their cooperation and commitment.

Izmirlian said the secret to the success of the ACF was that the organization works “together”—in collaborations—with its donors, members and the community to advance its projects and programs.

He recognized Charly and Julie Ghailian, Vahan and Armine Garboushian, as well as Vahik and Alice Petrossian, who he said represented the late Hacop and Mina Shirvanian, as members of the original Founders’ Circle of the ACF. Izmirlian also thanked Meher and Satig Der Ohanessian, Garo and Sosse Eshgian and Ara and Silva Khatchigian for their continued support of the ACF and its activities. He also extended special gratitude to Bedig and Maro Fermanian, as well as Vatche and Elena Fermanian, who he said, in addition to their contributions, support the organization by other means to ensure the success of ACF projects.

“There’s no way I will leave the podium before I recognize the unparalleled work of the banquet organizing committee. I want to thank each and every one of the members of the said committee who are responsible for the success of this wonderful rendez vous–Pattyl Aposhian, Elizabeth Boyajian, Angelo Ghailian, Jack Hadjinian, Viken Hovsepian, Gerard Kassabian, Sevak Khatchadourian, Garen Kirakossian and Nayri Tabakian,” said Izmirlian.

One of the many special moments that highlighted this year’s ACF banquet and contributed it to its success was a special presentation honoring Western Prelate Archbishop Moushegh Mardirossian for his 25-year service as the Prelate and leader of the Armenian Apostolic Church of America.

In introducing the honor, Armenian Revolutionary Federation Western U.S. Central Committee co-chair Dr. Carmen Ohanian said that there are individuals in the community who through their dedication and unwavering commitment have contributed to the advancement and expansion of the Armenian-American community. Through their humble efforts, she said, they have left an indelible mark on the community’s collective accomplishments.

One such person, Ohanian said, was Archbishop Moushegh Mardirossian, who in his leadership role in the last 25 years, “we witnessed the advancement of our community through the Armenian Church and his spiritual presence.”

Ohanian pointed to the expansion of parishes and new churches, as well as the construction of a new Prelacy headquarters as some of the crucial accomplishment led by Archbishop Mardirossian. She also highlighted his leadership role in the commemoration of the centennial of the Armenian Genocide, as well as his consistent and encouraging support of efforts to advance the Armenian Cause, as keys to engaging countless parishioners in the pursuit of Hai-Tahd.

Ohanian also pointed to the Prelate’s continued efforts to preserve the Armenian language by undertaking and encouraging publication of authors, as well as the Armenian history and Hai-Tahd textbooks, while at the same elevating the Prelacy’s image through its television program and online ventures and providing “spiritual nourishment” to our community.

She invited the Prelacy Executive Council Chairman Garo Eshgian and ACF Board member Garo Ispendjian to join her in presenting a special token of appreciation.

Visibly moved, the Prelate, who had performed the invocation of the evening with special prayers for the ACF, thanked the organizers, saying that the ACF’s leadership in the community has contributed to the strong and vibrant institutions that are serving the Armenian people.

Before honoring the Prelate, Dr. Ohanian spoke of the ARF’s mission and cited the slogan the party used earlier this year to mark its 129th anniversary—“For the Homeland, With the People.”

“Our message is simple and clear,” said Ohanian. “With our network of organization, we are standing by our people, ready to serve our nation and our homeland.”

“The strengthening of Armenia’s statehood and Artsakh security and the resolution of the conflict are the most important priorities for the ARF. We believe that this vision can be realized completely only through a creation of a national plan, whereby the capabilities of all Armenians will be put forth in the name of the Armenian Cause and the collective aspiration of the Armenian people,” said Ohanian.

Another novel aspect, which set this year’s ACF banquet apart from others was the presence of beloved singer Harout Pamboukjian, who took the stage to perform some of his popular songs, engaging the audience throughout his performance.

Following his performance, he took to the podium to recount an anecdote from when he was child growing up in Soviet Armenia and how his parents, who were repatriates from Lebanon, had told him that there was only one entity that he should know that advances the needs of the people and fights for justice—the ARF and its affiliate organizations.

As a token of appreciation to Pamboukjian decades-long and storied career, the ACF presented him with a memento—a pen—which was presented to singer by committee member Harry Vorperian.

The evening’s program began with Master of Ceremonies attorney Armen K. Hovannisian welcoming the guests to the event, recalling that since the last the ACF held its gala “the Armenian people turned the corner on an outdated tradition in which their voices were not heard, their will was not registered, and their sacrifices were not recognized. For the first time in modern history, citizens of the Republic gave shape, form, and dimension to their civic and individual rights, responsibilities, and entitlements.”

“But how about that equally blessed and integral part of the Armenian Nation which is right here, the part of the Armenian Nation that is assembled in this room?” pondered Hovannisian. “Decades before the Republic’s recent transformation, you and your families had already assumed responsibility for a less publicized, a less marketable, a less Facebook-friendly, but equally historic Evolution. That’s Evolution with an E. Think about that. An organization with Revolution in the center of its name repositioned its capital R to make way for the long and laborious haul of trans-generational devotion.”

Representatives of the Armenian Youth Federation and the ARF Shant Student Association Mirna Kassamanian and Aram Manoukian each recounted the way the ACF had made an indelible mark on them growing up in the Armenian-American community and the opportunities the organization had provided for them and their peers to advance the Armenian Cause and make a difference as a new generation of activists carrying the torch of justice for the Armenian people.

The National Anthems of the United States and Armenia were performed by a quintet of Rose and Alex Pilibos Armenian school students—Lar Tabakian, Isabelle Mesrobian, Nareh Terzian, Areni Chalikian and Monique Massayantz. The group also performed renditions of popular Armenian songs following the invocation by Archbishop Mardirossian. Popular singer Araksya Amirkhanyan also performed during the evening, dazzling the audience with her unique sound.

Throughout the years, the ACF Annual Gala has become a centerpiece event for the community. This year was no different. The ACF’s supporters, donors and friends, once again, proved that, indeed, by working together a successful event can become a conduit for advancing the educational and cultural needs of our community and our nation.