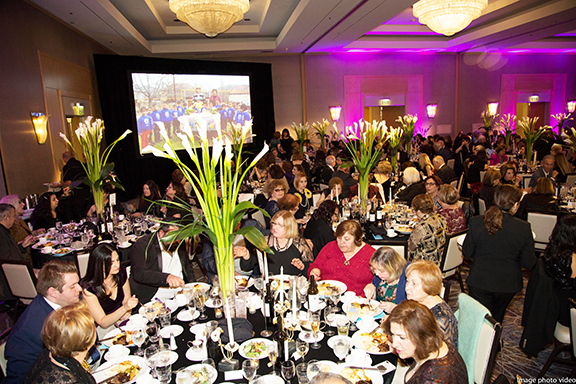 ARS Celebrates 110 Years of Service at Sold Out Gala

The Gala began with a cocktail hour starting at 6 p.m., during which guests participated in a silent auction with many interesting Michael Aram pieces by Naz Atikian of Le Papillon.

The official program began at 8 p.m., with opening remarks delivered by ARS Gala Organizing Committee Chairperson Vicky Marashlian, who welcomed guests and thanked supporters and committee members for their efforts in making the sold-out event a huge success.

Marashlian then introduced the evening’s Master of Ceremonies, Dr. Alina Dorian, Head of School of Rose & Alex Pilibos Armenian School. In her remarks, Dr. Dorian focused on the qualities of dedication and courage, both of which are embedded in the work of the Armenian Relief Society. After addressing guests, Dr. Dorian introduced soprano Rima Garabedian to officially kick off the Gala with the performance of the American, Armenian, and ARS anthems. Prelate Mardirossian then delivered the invocation and conveyed his congratulatory remarks to the organization.

Proclamations were presented by Senator Anthony Portantino, Assemblymember Laura Friedman, and Chief Deputy Anna Mouradian on behalf of Supervisor Kathryn Barger, all of whom have been long-time advocates of the Armenian Relief Society.

During dinner, guests enjoyed a performance of the masquerade dance, “Ghost,” by Grand Stage Dance School. Short video clips were shown representing significant events throughout the 110 years of the organization and the activities of the ARS of Western USA.

The program continued with the remarks made by ARS Regional Executive Chairperson Silva Poladian, who delivered the Board’s message. Poladian highlighted the 110 years of service the organization has provided to the Armenian people and affirmed that, with the support of the organization’s hard-working volunteer members and generous supporters, the organization will continue to advance its mission, “With The People, For The People.”

Poladian then invited Haigoush Keghinian Kohler to the stage to be recognized for her generous donation as the event’s Major Banquet Sponsor. Grateful for the recognition and with the opportunity to address guests, Kohler increased her donation during the event in honor of her grandchildren.

Remarks were also delivered by ARS Central Executive Chair Dr. Nyree Derderian, who reflected on the organization’s 110th Anniversary and stated, “The ARS has constantly evolved and grown in strength with every turning point without losing hope; a hope that is unwavering and renewed with every generation.”

The program concluded with the traditional candle lighting ceremony by 96 candle lighters, which included supporters, ARS chapters, sponsors, and members.

The celebration continued with live entertainment by Project One, while guests were mingling, dancing, and participating in the silent auction in the foyer.

The ARS Gala is a major annual fundraiser that benefits the region’s numerous programs and services in the humanitarian, educational, social, and cultural spheres.

The ARS of Western USA extends its thankful appreciation to the ARS Gala 2020’s Major Banquet Sponsor Haigoush Keghinian Kohler, as well as its sponsors and donors at all levels, candle lighters, chapters, members, and supporters, who contributed to the event’s success and the advancement of the region’s programs.

The Armenian Relief Society of Western USA, established in 1984 and with regional headquarters in Glendale, CA, has 24 chapters and more than 1,200 members in four western states. The ARS operates a Social Services Division and Child, Youth, and Family Guidance Center, 17 one-day schools, and funds numerous youth programs, scholarships, and relief efforts. For additional information, visit the website or call 818.500.1343.