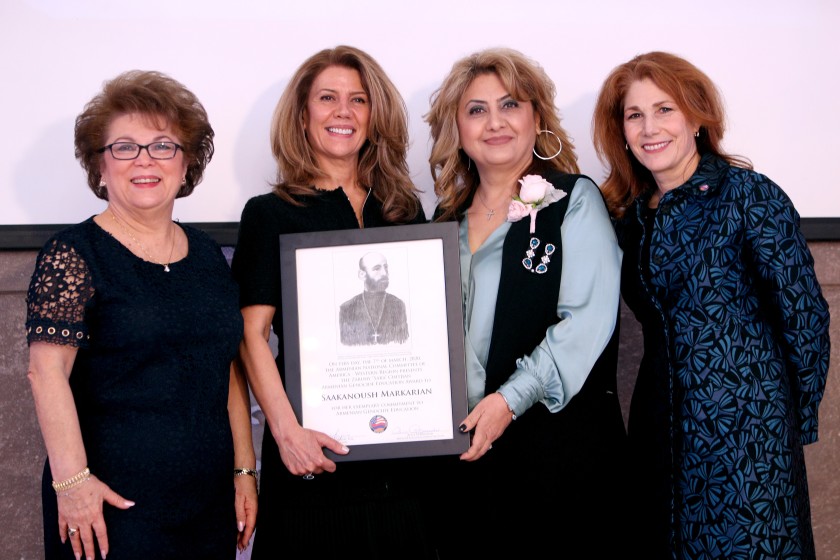 For the fourth time, the Armenian National Committee of America honored seven educators who have incorporated lessons about the Armenian Genocide into classrooms located in the Western region.

The U.S. Senate passed a resolution last year recognizing and encouraging education of the genocide during World War I, during which the Ottoman government killed more than 1.5 million Armenians. However, the group honored Saturday at the De Luxe Banquet Hall in Burbank had already been raising awareness of the genocide in public schools and universities for years.

Two Glendale teachers, Jennifer Davis and Saakanoush Markarian, were among those recognized for their efforts.

Davis, who has taught at Clark Magnet High School since it opened in 1998, was honored with the Armenian Genocide Education Award.

Her husband, Chris Davis, who also teaches in the same school, nominated her for the award, which goes to those who have gone above and beyond to educate their students about the Armenian Genocide.

Although she’s incorporated study of the Armenian Genocide into the classroom throughout her tenure, she facilitated a new project last school year. Davis helped get literary works recommended by the Genocide Education Committee approved for high school classrooms when she was the district’s English Curriculum Study Committee chair. Davis was one of the first to teach Dawn Anahid MacKeen’s “The Hundred-Year Walk,” a book about the author retracing her grandfather’s journey of surviving the Armenian Genocide.

As the 10th-grade English class read, students created artwork, poems and gathered historical research. They curated select pieces into a Google Site and shared it with the author.

“She was really touched by what they had created,” Davis said.

When asked what she hopes students get out of the curriculum, Davis said, “I don’t want students to leave feeling despaired about the future. They are going to be our future. By learning about the tragedies of the past, we can change by showing kindness and compassion to one another regardless of religion.”

Markarian, who teaches in R.D. White Elementary, won the Zaruhy “Sara” Chitjian Armenian Heritage Award. The award, named after an educator who was also the daughter of genocide survivors, is awarded to those of Armenian descent who teach and preserve the Armenian heritage.

Markarian teaches under the Foreign Language Academies of Glendale Armenian program, where students are taught in Armenian across all subjects for half the day — strengthening their bilingual skills.

For the Forget Me Not Project, Markarian’s students gathered facts about the Armenian Genocide and choose one Armenian intellectual to memorialize. They wrote and presented the person’s full name, date of birth, profession, education and how they were killed.

Markarian was born in Armenia and moved to the United States in 1992. Although she studied chemistry in Armenia, she transitioned to majoring in liberal studies at Cal State L.A.

“When my son was born, I decided to become an educator because I love working with students. I love helping them emotionally and academically,” said Markarian who later earned a master’s degree in educational leadership at Cal State Northridge.

She added, “I’m just proud that I work with a district that delivers a program 50% in English, 50% in Armenian every single day, which helps our students to learn about their heritage and culture.”