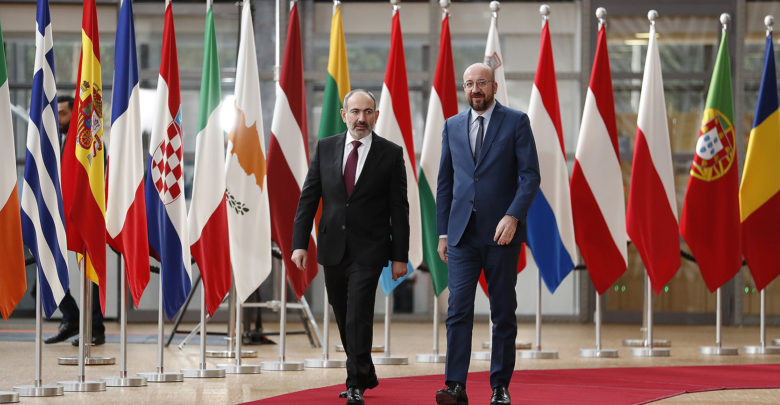 On a working visit to Brussels, Prime Minister Nikol Pashinyan met with the President of the European Council Charles Michel.

The interlocutors discussed a wide range of issues related to Armenia-EU relations. At the center of the discussion was the wide agenda of democratic reforms in Armenia.

Charles Michel welcomed the Prime Minister’s visit and noted that it was a good opportunity to discuss further steps of cooperation, including effective implementation of democratic reforms in Armenia.

The Prime Minister attached importance to EU’s support for Armenia’s reforms and expressed confidence that after the appointment of Mr. Michel as President of the European Council, the Armenia-EU partnership would continue to develop effectively.

“The European Union is the main partner of our reforms, we have always felt EU’s useful support in their implementation,” Nikol Pashinyan said.

The parties expressed their readiness to further develop the Armenia-EU cooperation, including trade and economic relations.

The President of the European Council underlined the importance of the path of reforms chosen by Armenia and added that the European Union would continue to actively cooperate and assist Armenia in bringing about democratic, including judicial, reforms.

Nikol Pashinyan and Charles Michel exchanged views on their expectations from the upcoming Eastern Partnership summit in Brussels in June.