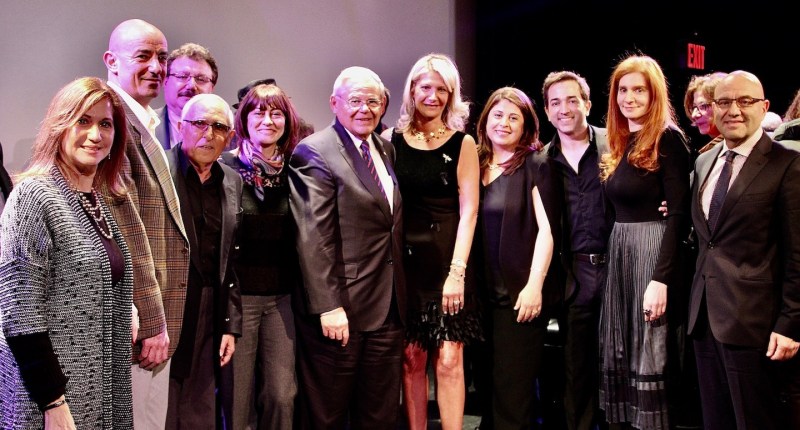 NEW YORK — The New York City presentation of the bio-musical Charles, based on the life and songs of legendary world singer Charles Aznavour, debuted to a standing-room-only audience at Symphony Space, in an event hosted by the Tekeyan Cultural Association of Greater New York. Special guests in attendance included senior United States Senator from New Jersey Robert Menendez, Colonel Tigran Hovhanisyan, military adviser of Armenia to the United Nations and Zoya Stepanyan, Second Secretary of the Permanent Mission of Armenia to the United Nations.

“Taleen created a beautiful homage to the legendary artist, Charles Aznavour, and being able to portray him is a dream come true,” said Bernard C. Bayer, a member of the Screen Actors Guild who has collaborated with Academy Award-winning film composers on the piano. “Performing in New York City to a sold out show is a testament to the enduring passion and love that audiences of all ages have for Aznavour, whose boundless talent, humor, passion and perseverance make him such an inspiration.”

The bio-musical combined a narrative of Aznavour’s key life moments, from living in Occupied France during World War II, the son of Armenian Genocide survivors, to his creative spark with Edith Piaf, to the challenges he faced while trying to make a name for himself in show business. The biographical scenes were enriched by live musical performances of Aznavour’s signature songs, including La Boheme, Mourir D’Aimer and La Mamma, as well as Franco-English versions of Hier Encore/Yesterday When I Was Young and Emmenez-Moi/Take Me Away, performed as a duet by Maurice and his daughter Mariette, who also sang Aznavour’s English hit She and Edith Piaf’s memorable La Vie En Rose.

“Performing in the Big Apple, where Aznavour has staged many of his memorable shows, was very exciting,” said Mariette Soudjian, who has been featured on E! News and Comedy Central. “The Tekeyan Cultural Association of Greater New York was a wonderful host and as performers we were delighted the show was sold out so quickly.”

“We congratulate the performers for an amazing show,” said Hilda Hartounian, Chair of the Tekeyan Cultural Association, whose Executive Committee Members included Shoghig Medzadourian, Vartan Ilanjian and Barkev Kalayjian. “The audience loved the performance and we are proud that the Tekeyan Cultural Association of Greater New York continues its commitment to preserve the Armenian culture in the Diaspora through unique productions such as this.”

The thought-provoking production unveiled many details about Aznavour’s climb to the top and set these moments into historical context while exploring his upbringing, artistic influences and his impact on the French Chansons as an integral member of France’s Golden Age of Music. The show welcomed audience members of all ages and cultural backgrounds, following in the footsteps of Aznavour, who created music for all without boundaries.

“My wife, daughters and I loved the show so much we couldn’t stop talking about it on the drive home,” said attendee Mark Dabbagh. “Thank you for inspiring us and for taking me back to a time when I listened to Charles Aznavour in Beirut.”

“Although I missed the premiere of Charles in Los Angeles, I patiently waited for a show in New York and it was truly a memorable evening,” said Vivian Hovsepian. “The narrative about Aznavour’s biography, the music, singing and multimedia showcasing the legendary artist was brought to life with such innovative talent, hard work and love.”