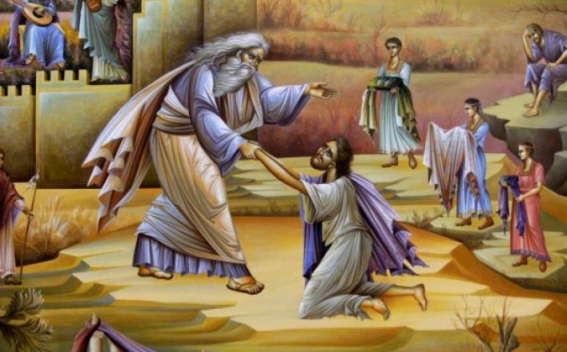 Sunday of the Lost (Prodigal) Sun

The third Sunday of the period of Great Lent is called the Sunday of the Lost Son according to the Parable of the Lost Son told in the Gospel of Luke (Luke 15:15-32), the content of which is the following. There was once a man who had two sons. Upon the request of the younger one he divided his property between his two sons. After a few days the younger son sold his part of the property and left home with the money. He went to a country far away, where he wasted his money in reckless living. He spent everything he had. Then a severe famine spread over that country and he was left without a thing. In that time of trouble he remembered his father’s house, regretted for his reckless living and returned to his father’s home. Seeing that his younger son has regretted, the father received him joyfully. Whereas the elder son complained, saying that during all those years he had worked for his father like a slave and had never disobeyed his orders, and however, he had never deserved such honor. His father answered him: “My son, you are always here with me, and everything I have is yours. But we had to celebrate and to be happy, because your brother was dead, but now he is alive; he was lost, but now he has been found.”

The elder and the younger sons are the righteous and the sinful souls, and father’s receiving his lost son means that in the same way God receives the regretting sinner. The allegoric meaning of the parable is in the elder son symbolizing all those who are righteous or think that there are righteous. The parable admonishes all of them not to be self-conceited Qahana.am informs..